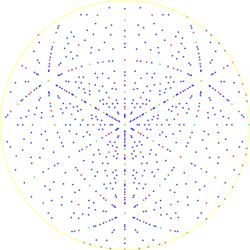 Pole figure in stereographic projection of the diamond lattice showing the 3-fold symmetry along the [111] direction.

The diamond cubic crystal structure is a repeating pattern of 8 atoms that certain materials may adopt as they solidify. While the first known example was diamond, other elements in group 14 also adopt this structure, including α-tin, the semiconductors silicon and germanium, and silicon/germanium alloys in any proportion.

Diamond cubic is in the FdTemplate:Overlinem space group, which follows the face-centered cubic Bravais lattice. The lattice describes the repeat pattern; for diamond cubic crystals this lattice is "decorated" with a motif of two tetrahedrally bonded atoms in each primitive cell, separated by 1/4 of the width of the unit cell in each dimension.[1] Many compound semiconductors such as gallium arsenide, β-silicon carbide and indium antimonide adopt the analogous zincblende structure, where each atom has nearest neighbors of an unlike element. Zincblende's space group is FTemplate:Overline3m, but many of its structural properties are quite similar to the diamond structure.[2]

,[3] significantly smaller (indicating a less dense structure) than the packing factors for the face-centered and body-centered cubic lattices.[4] Zinc blende structures have higher packing factors than 0.34 depending on the relative sizes of their two component atoms.

The first, second, third and fourth nearest-neighbor distances in units of the cubic lattice constant are

There are eight points (modulo 4) that satisfy these conditions:

Because the diamond structure forms a distance-preserving subset of the four-dimensional integer lattice, it is a partial cube.[6]

The diamond cubic is sometimes called the "diamond lattice" but it is not, mathematically, a lattice: there is no translational symmetry that takes the point (0,0,0) into the point (3,3,3), for instance. However, it is still a highly symmetric structure: any incident pair of a vertex and edge can be transformed into any other incident pair by a congruence of Euclidean space. Moreover the diamond crystal as a network in space has a strong isotropic property.[8] Namely, for any two vertices x and y of the crystal net, and for any ordering of the edges adjacent to x and any ordering of the edges adjacent to y, there is a net-preserving congruence taking x to y and each x-edge to the similarly ordered y-edge. Another (hypothetical) crystal with this property is the K4 crystal (also called the Laves graph of girth ten, (10,3)-a, or the diamond twin).[9]