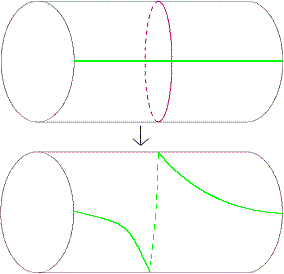 A positive Dehn twist applied to a cylinder about the red curve c modifies the green curve as shown.

In geometric topology, a branch of mathematics, a Dehn twist is a certain type of self-homeomorphism of a surface (two-dimensional manifold). 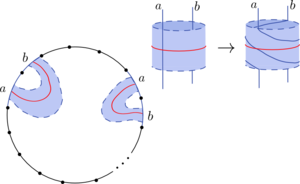 General Dehn twist on a compact surface represented by a n-gon.

Suppose that c is a simple closed curve in a closed, orientable surface S. Let A be a tubular neighborhood of c. Then A is an annulus and so is homeomorphic to the Cartesian product of

where I is the unit interval. Give A coordinates (s, t) where s is a complex number of the form

and t in the unit interval.

Then f is a Dehn twist about the curve c.

Dehn twists can also be defined on a non-orientable surface S, provided one starts with a 2-sided simple closed curve c on S. 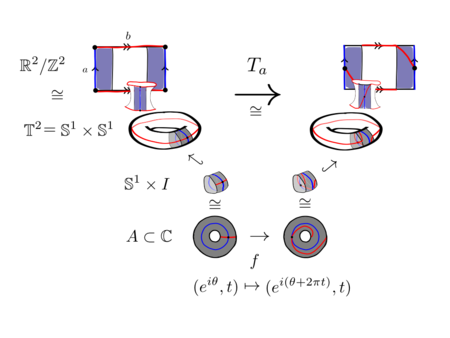 An example of a Dehn twist on the torus, along the closed curve a, in blue, where a is an edge of the fundamental polygon representing the torus 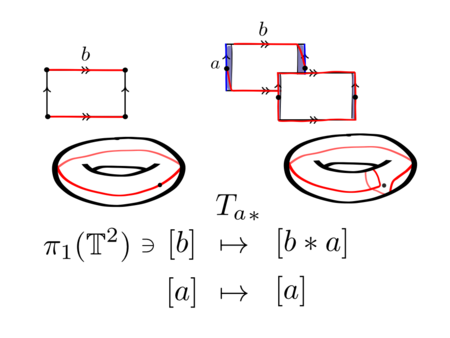 Given the choice of gluing homeomorphism in the figure, a tubular neighborhood of the curve

will look like a band linked around a doughnut. This neighborhood is homeomorphic to an annulus, say

in the complex plane.

By extending to the torus the twisting map

, yields a Dehn twist of the torus by a.

This self homeomorphism acts on the closed curve along b. In the tubular neighborhood it takes the curve of b once along the curve of a.

where [x] are the homotopy classes of the closed curve x in the torus. Notice

is the path travelled around b then a.

It is a theorem of Max Dehn that maps of this form generate the mapping class group of isotopy classes of orientation-preserving homeomorphisms of any closed, oriented genus-

surface. W. B. R. Lickorish later rediscovered this result with a simpler proof and in addition showed that Dehn twists along

explicit curves generate the mapping class group (this is called by the punning name "Lickorish twist theorem"); this number was later improved by Stephen P. Humphries to

, which he showed was the minimal number.

Lickorish also obtained an analogous result for non-orientable surfaces, which require not only Dehn twists, but also "Y-homeomorphisms."