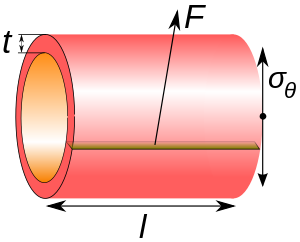 Components of cylinder or circumferential stress.

In mechanics, a cylinder stress is a stress distribution with rotational symmetry; that is, which remains unchanged if the stressed object is rotated about some fixed axis.

The classical example (and namesake) of hoop stress is the tension applied to the iron bands, or hoops, of a wooden barrel. In a straight, closed pipe, any force applied to the cylindrical pipe wall by a pressure differential will ultimately give rise to hoop stresses. Similarly, if this pipe has flat end caps, any force applied to them by static pressure will induce a perpendicular axial stress on the same pipe wall. Thin sections often have negligibly small radial stress, but accurate models of thicker-walled cylindrical shells require such stresses to be taken into account.

The hoop stress is the force exerted circumferentially (perpendicular both to the axis and to the radius of the object) in both directions on every particle in the cylinder wall. It can be described as:

An alternative to hoop stress in describing circumferential stress is wall stress or wall tension (T), which usually is defined as the total circumferential force exerted along the entire radial thickness:[1] 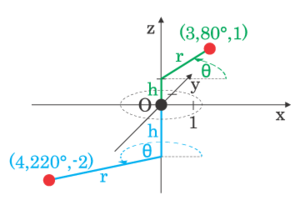 Along with axial stress and radial stress, circumferential stress is a component of the stress tensor in cylindrical coordinates.

It is usually useful to decompose any force applied to an object with rotational symmetry into components parallel to the cylindrical coordinates r, z, and θ. These components of force induce corresponding stresses: radial stress, axial stress and hoop stress, respectively.

For the thin-walled assumption to be valid the vessel must have a wall thickness of no more than about one-tenth (often cited as one twentieth) of its radius. This allows for treating the wall as a surface, and subsequently using the Young–Laplace equation for estimating the hoop stress created by an internal pressure on a thin-walled cylindrical pressure vessel:

The hoop stress equation for thin shells is also approximately valid for spherical vessels, including plant cells and bacteria in which the internal turgor pressure may reach several atmospheres.

When the vessel has closed ends the internal pressure acts on them to develop a force along the axis of the cylinder. This is known as the axial stress and is usually less than the hoop stress.

Though this may be approximated to

Also in this situation a radial stress

is developed and may be estimated in thin walled cylinders as:

When the cylinder to be studied has a r/t ratio of less than 10 (often cited as 20) the thin-walled cylinder equations no longer hold since stresses vary significantly between inside and outside surfaces and shear stress through the cross section can no longer be neglected.

In order to calculate the stresses and strains here a set of equations known as the Lamé equations must be used.

A and B may be found by inspection of the boundary conditions. For example, the simplest case is a solid cylinder:

and a solid cylinder cannot have an internal pressure so

Fracture is governed by the hoop stress in the absence of other external loads since it is the largest principal stress. Note that a hoop experiences the greatest stress at its inside (the outside and inside experience the same total strain which however is distributed over different circumferences), hence cracks in pipes should theoretically start from inside the pipe. This is why pipe inspections after earthquakes usually involve sending a camera inside a pipe to inspect for cracks. Yielding is governed by an equivalent stress that includes hoop stress and the longitudinal or radial stress when present.

In the pathology of vascular or gastrointestinal walls, the wall tension represents the muscular tension on the wall of the vessel. As a result of the Law of Laplace, if an aneurysm forms in a blood vessel wall, the radius of the vessel has increased. This means that the inward force on the vessel decreases, and therefore the aneurysm will continue to expand until it ruptures. A similar logic applies to the formation of diverticuli in the gut.[2]

Historical development of the theory 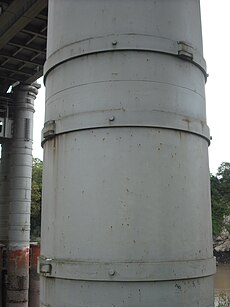 The first theoretical analysis of the stress in cylinders was developed by the mid-19th century engineer William Fairbairn, assisted by his mathematical analyst Eaton Hodgkinson. Their first interest was in studying the design and failures of steam boilers.[4] Early on Fairbairn realised that the hoop stress was twice the longitudinal stress, an important factor in the assembly of boiler shells from rolled sheets joined by riveting. Later work was applied to bridge building, and the invention of the box girder. In the Chepstow Railway Bridge, the cast iron pillars are strengthened by obvious bands of wrought iron. The vertical, longitudinal force is a compressive force, which cast iron is well able to resist. The hoop stress though is tensile, and so wrought iron, a material with better tensile strength is added.