In category theory, the coproduct, or categorical sum, is a category-theoretic construction which includes as examples the disjoint union of sets and of topological spaces, the free product of groups, and the direct sum of modules and vector spaces. The coproduct of a family of objects is essentially the "least specific" object to which each object in the family admits a morphism. It is the category-theoretic dual notion to the categorical product, which means the definition is the same as the product but with all arrows reversed. Despite this seemingly innocuous change in the name and notation, coproducts can be and typically are dramatically different from products.

The formal definition is as follows: Let C be a category and let {Xj : j ∈ J} be an indexed family of objects in C. The coproduct of the family {Xj} is an object X together with a collection of morphisms ij : Xj → X (called canonical injections although they need not be injections or even monic) which satisfy a universal property: for any object Y and any collection of morphisms fj : Xj → Y, there exists a unique morphism f from X to Y such that fj = f ∘ ij. That is, the following diagram commutes (for each j): 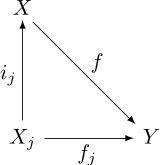 The coproduct of the family {Xj} is often denoted

Sometimes the morphism f may be denoted

to indicate its dependence on the individual fj.

If the family of objects consists of only two members the coproduct is usually written X1 ∐ X2 or X1 ⊕ X2 or sometimes simply X1 + X2, and the diagram takes the form:

In the case of topological spaces coproducts are disjoint unions with their disjoint union topologies. That is, it is a disjoint union of the underlying sets, and the open sets are sets open in each of the spaces, in a rather evident sense. In the category of pointed spaces, fundamental in homotopy theory, the coproduct is the wedge sum (which amounts to joining a collection of spaces with base points at a common base point).

The coproduct construction given above is actually a special case of a colimit in category theory. The coproduct in a category C can be defined as the colimit of any functor from a discrete category J into C. Not every family {Xj} will have a coproduct in general, but if it does, then the coproduct is unique in a strong sense: if ij : Xj → X and kj : Xj → Y are two coproducts of the family {Xj}, then (by the definition of coproducts) there exists a unique isomorphism f : X → Y such that fij = kj  for each j in J.

The coproduct indexed by the empty set (that is, an empty coproduct) is the same as an initial object in C.

If J is a set such that all coproducts for families indexed with J exist, then it is possible to choose the products in a compatible fashion so that the coproduct turns into a functor CJ → C. The coproduct of the family {Xj} is then often denoted by ∐j Xj, and the maps ij are known as the natural injections.

Letting HomC(U,V) denote the set of all morphisms from U to V in C (that is, a hom-set in C), we have a natural isomorphism

given by the bijection which maps every tuple of morphisms

(a product in Set, the category of sets, which is the Cartesian product, so it is a tuple of morphisms) to the morphism

That this map is a surjection follows from the commutativity of the diagram: any morphism f is the coproduct of the tuple

That it is an injection follows from the universal construction which stipulates the uniqueness of such maps. The naturality of the isomorphism is also a consequence of the diagram. Thus the contravariant hom-functor changes coproducts into products. Stated another way, the hom-functor, viewed as a functor from the opposite category Copp to Set is continuous; it preserves limits (a coproduct in C is a product in Copp).

If J is a finite set, say J = {1,...,n}, then the coproduct of objects X1,...,Xn is often denoted by X1⊕...⊕Xn. Suppose all finite coproducts exist in C, coproduct functors have been chosen as above, and 0 denotes the initial object of C corresponding to the empty coproduct. We then have natural isomorphisms

These properties are formally similar to those of a commutative monoid; a category with finite coproducts is an example of a symmetric monoidal category.

If the category has a zero object Z, then we have unique morphism X → Z (since Z is terminal) and thus a morphism X ⊕ Y → Z ⊕ Y. Since Z is also initial, we have a canonical isomorphism Z ⊕ Y ≅ Y as in the preceding paragraph. We thus have morphisms X ⊕ Y → X and X ⊕ Y → Y, by which we infer a canonical morphism X ⊕ Y → X×Y. This may be extended by induction to a canonical morphism from any finite coproduct to the corresponding product. This morphism need not in general be an isomorphism; in Grp it is a proper epimorphism while in Set* (the category of pointed sets) it is a proper monomorphism. In any preadditive category, this morphism is an isomorphism and the corresponding object is known as the biproduct. A category with all finite biproducts is known as an additive category.

If all families of objects indexed by J have coproducts in C, then the coproduct comprises a functor CJ → C. Note that, like the product, this functor is covariant.