In mathematics, the question of whether the Fourier series of a periodic function converges to the given function is researched by a field known as classical harmonic analysis, a branch of pure mathematics. Convergence is not necessarily a given in the general case, and there are criteria which need to be met in order for convergence to occur.

Consider ƒ an integrable function on the interval [0,2π]. For such an ƒ the Fourier coefficients

are defined by the formula

The notation ~ here means that the sum represents the function in some sense. In order to investigate this more carefully, the partial sums need to be defined:

The question we will be interested in is: Do the functions

(which are functions of the variable t we omitted in the notation) converge to ƒ and in which sense? Are there conditions on ƒ ensuring this or that type of convergence? This is the main problem discussed in this article.

Before continuing the Dirichlet kernel needs to be introduced. Taking the formula for

, inserting it into the formula for

and doing some algebra will give that

where ∗ stands for the periodic convolution and

is the Dirichlet kernel which has an explicit formula,

The Dirichlet kernel is not a positive kernel, and in fact, its norm diverges, namely

In applications, it is often useful to know the size of the Fourier coefficient.

is an absolutely continuous function,

a constant that only depends on

is a bounded variation function,

is in the α-Hölder class 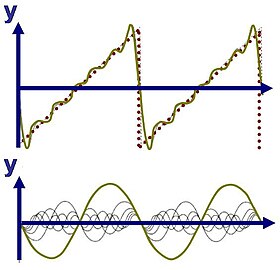 The Dirichlet–Dini Criterion states that: if ƒ is 2π–periodic, locally integrable and satisfies

then (Snƒ)(x0) converges to ℓ. This implies that for any function ƒ of any Hölder class α > 0, the Fourier series converges everywhere to ƒ(x).

It is also known that for any periodic function of bounded variation, the Fourier series converges everywhere. See also Dini test. In general, the most common criteria for pointwise convergence of a periodic function f are as follows:

has modulus of continuity

(we assume here that

is also non decreasing), then the partial sum of the Fourier series converges to the function with speed[1]

that does not depend upon

This theorem, first proved by D Jackson, tells, for example, that if

periodic and absolutely continuous on

, then the Fourier series of

converges uniformly, but not necessarily absolutely, to

A function ƒ has an absolutely converging Fourier series if

Obviously, if this condition holds then

converges absolutely for every t and on the other hand, it is enough that

the constant in the Hölder condition,

a constant only dependent on

is the norm of the Krein algebra. Notice that the 1/2 here is essential—there are 1/2-Hölder functions which do not belong to the Wiener algebra. Besides, this theorem cannot improve the best known bound on the size of the Fourier coefficient of a α-Hölder function—that is only

If ƒ is of bounded variation and belongs to a α-Hölder class for some α > 0, it belongs to the Wiener algebra.

The simplest case is that of L2, which is a direct transcription of general Hilbert space results. According to the Riesz–Fischer theorem, if ƒ is square-integrable then

converges to ƒ in the norm of L2. It is easy to see that the converse is also true: if the limit above is zero, ƒ must be in L2. So this is an if and only if condition.

If 2 in the exponents above is replaced with some p, the question becomes much harder. It turns out that the convergence still holds if 1 < p < ∞. In other words, for ƒ in Lp,

converges to ƒ in the Lp norm. The original proof uses properties of holomorphic functions and Hardy spaces, and another proof, due to Salomon Bochner relies upon the Riesz–Thorin interpolation theorem. For p = 1 and infinity, the result is not true. The construction of an example of divergence in L1 was first done by Andrey Kolmogorov (see below). For infinity, the result is a corollary of the uniform boundedness principle.

If the partial summation operator SN is replaced by a suitable summability kernel (for example the Fejér sum obtained by convolution with the Fejér kernel), basic functional analytic techniques can be applied to show that norm convergence holds for 1 ≤ p < ∞.

The problem whether the Fourier series of any continuous function converges almost everywhere was posed by Nikolai Lusin in the 1920s and remained open until finally resolved positively in 1966 by Lennart Carleson. Indeed, Carleson showed that the Fourier expansion of any function in L2 converges almost everywhere. This result is now known as Carleson's theorem. Later on Richard Hunt generalized this to Lp for any p > 1. Despite a number of attempts at simplifying the proof, it is still one of the most difficult results in analysis.

Contrariwise, Andrey Kolmogorov, as a student at the age of 19, in his very first scientific work, constructed an example of a function in L1 whose Fourier series diverges almost everywhere (later improved to divergence everywhere).

It might be interesting to note that Jean-Pierre Kahane and Yitzhak Katznelson proved that for any given set E of measure zero, there exists a continuous function ƒ such that the Fourier series of ƒ fails to converge on any point of E.

Does the sequence 0,1,0,1,0,1,... (the partial sums of Grandi's series) converge to ½? This does not seem like a very unreasonable generalization of the notion of convergence. Hence we say that any sequence

It is not difficult to see that if a sequence converges to some a then it is also Cesàro summable to it.

To discuss summability of Fourier series, we must replace

with an appropriate notion. Hence we define

is no longer associated with Dirichlet's kernel, but with Fejér's kernel, namely

The main difference is that Fejér's kernel is a positive kernel. Fejér's theorem states that the above sequence of partial sums converge uniformly to ƒ. This implies much better convergence properties

Results about summability can also imply results about regular convergence. For example, we learn that if ƒ is continuous at t, then the Fourier series of ƒ cannot converge to a value different from ƒ(t). It may either converge to ƒ(t) or diverge. This is because, if

converges to some value x, it is also summable to it, so from the first summability property above, x = ƒ(t).

The order of growth of Dirichlet's kernel is logarithmic, i.e.

See Big O notation for the notation O(1). It should be noted that the actual value

is both difficult to calculate (see Zygmund 8.3) and of almost no use. The fact that for some constant c we have

is quite clear when one examines the graph of Dirichlet's kernel. The integral over the n-th peak is bigger than c/n and therefore the estimate for the harmonic sum gives the logarithmic estimate.

This estimate entails quantitative versions of some of the previous results. For any continuous function f and any t one has

However, for any order of growth ω(n) smaller than log, this no longer holds and it is possible to find a continuous function f such that for some t,

The equivalent problem for divergence everywhere is open. Sergei Konyagin managed to construct an integrable function such that for every t one has

It is not known whether this example is best possible. The only bound from the other direction known is log n.

Upon examining the equivalent problem in more than one dimension, it is necessary to specify the precise order of summation one uses. For example, in two dimensions, one may define

which are known as "square partial sums". Replacing the sum above with

lead to "circular partial sums". The difference between these two definitions is quite notable. For example, the norm of the corresponding Dirichlet kernel for square partial sums is of the order of

while for circular partial sums it is of the order of

The Katznelson book is the one using the most modern terminology and style of the three. The original publishing dates are: Zygmund in 1935, Bari in 1961 and Katznelson in 1968. Zygmund's book was greatly expanded in its second publishing in 1959, however.

Articles referred to in the text

This is the first proof that the Fourier series of a continuous function might diverge. In German

The first is a construction of an integrable function whose Fourier series diverges almost everywhere. The second is a strengthening to divergence everywhere. In French.

This is the original paper of Carleson, where he proves that the Fourier expansion of any continuous function converges almost everywhere; the paper of Hunt where he generalizes it to

spaces; two attempts at simplifying the proof; and a book that gives a self contained exposition of it.

In this paper the authors show that for any set of zero measure there exists a continuous function on the circle whose Fourier series diverges on that set. In French.

The Konyagin paper proves the

divergence result discussed above. A simpler proof that gives only log log n can be found in Kahane's book.