Simulation of thermal convection. Red hues designate hot areas, while regions with blue hues are cold. A hot, less-dense lower boundary layer sends plumes of hot material upwards, and likewise, cold material from the top moves downwards. This illustration is taken from a model of convection in the Earth's mantle.

The term convection can sometimes refer to transfer of heat with any fluid movement, but advection is the more precise term for the transfer due only to bulk fluid flow. The process of transfer of heat from a solid to a fluid, or the reverse, is not only transfer of heat by bulk motion of the fluid, but diffusion and conduction of heat through the still boundary layer next to the solid. Thus, this process without a moving fluid requires both diffusion and advection of heat, a process that is usually referred to as convection. Convection that occurs in the earth's mantle causes tectonic plates to move.

Convection can be "forced" by movement of a fluid by means other than buoyancy forces (for example, a water pump in an automobile engine). Thermal expansion of fluids may also force convection. In other cases, natural buoyancy forces alone are entirely responsible for fluid motion when the fluid is heated, and this process is called "natural convection". An example is the draft in a chimney or around any fire. In natural convection, an increase in temperature produces a reduction in density, which in turn causes fluid motion due to pressures and forces when fluids of different densities are affected by gravity (or any g-force). For example, when water is heated on a stove, hot water from the bottom of the pan rises, displacing the colder denser liquid, which falls. After heating has stopped, mixing and conduction from this natural convection eventually result in a nearly homogeneous density, and even temperature. Without the presence of gravity (or conditions that cause a g-force of any type), natural convection does not occur, and only forced-convection modes operate.

The convection heat transfer mode comprises one mechanism. In addition to energy transfer due to specific molecular motion (diffusion), energy is transferred by bulk, or macroscopic, motion of the fluid. This motion is associated with the fact that, at any instant, large numbers of molecules are moving collectively or as aggregates. Such motion, in the presence of a temperature gradient, contributes to heat transfer. Because the molecules in aggregate retain their random motion, the total heat transfer is then due to the superposition of energy transport by random motion of the molecules and by the bulk motion of the fluid. It is customary to use the term convection when referring to this cumulative transport and the term advection when referring to the transport due to bulk fluid motion.[1] 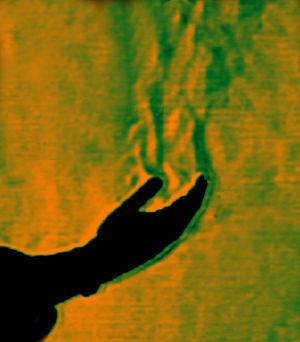 Convection is the transfer of thermal energy from one place to another by the movement of fluids. Although often discussed as a distinct method of heat transfer, convection describes the combined effects of conduction and fluid flow or mass exchange.

Two types of convective heat transfer may be distinguished:

Internal and external flow can also classify convection. Internal flow occurs when a fluid is enclosed by a solid boundary such when flowing through a pipe. An external flow occurs when a fluid extends indefinitely without encountering a solid surface. Both of these types of convection, either natural or forced, can be internal or external because they are independent of each other.{{ safesubst:#invoke:Unsubst||date=__DATE__ |$B= {{#invoke:Category handler|main}}{{#invoke:Category handler|main}}[citation needed] }} The bulk temperature, or the average fluid temperature, is a convenient reference point for evaluating properties related to convective heat transfer, particularly in applications related to flow in pipes and ducts.

For a visual experience of natural convection, a glass filled with hot water and some red food dye may be placed inside a fish tank with cold, clear water. The convection currents of the red liquid may be seen to rise and fall in different regions, then eventually settle, illustrating the process as heat gradients are dissipated.

Newton's law, which (as noted) requires a constant heat transfer coefficient, states that the rate of heat loss of a body is proportional to the difference in temperatures between the body and its surroundings. The rate of heat transfer in such circumstances is derived below:[5]

Newton's cooling law is a solution of the differential equation given by Fourier's law:

is the thermal energy in joules

is the time-dependent thermal gradient between environment and object

The heat transfer coefficient h depends upon physical properties of the fluid and the physical situation in which convection occurs. Therefore, a single usable heat transfer coefficient (one that does not vary significantly across the temperature-difference ranges covered during cooling and heating) must be derived or found experimentally for every system that can be analyzed using the presumption that Newton's law will hold.

Newton's law behavior also requires that internal heat conduction within the object be large in comparison to the loss/gain of heat by surface transfer (conduction and/or convection). This allows use of the so-called lumped capacitance model. Again these conditions may not be true (see heat transfer). When internal conduction is rapid as compared with surface heat transfer rates, and Newton's law can be used, the temperature at any time will always be relatively uniform throughout the volume of the object, although of course this single temperature will change exponentially, as time progresses.

Also, an accurate formulation for temperatures may require analysis based on changing heat transfer coefficients at different temperatures, a situation frequently found in free-convection situations, and which precludes accurate use of Newton's law. Assuming these are not problems, then the solution can be given if heat transfer within the object is considered to be far more rapid than heat transfer at the boundary (so that there are small thermal gradients within the object). This condition, in turn, allows the heat in the object to be expressed as conduction.

A correction to Newton's law concerning larger temperature differentials was made in 1817 by Dulong and Petit,[7] who also formulated the Dulong–Petit law concerning the molar specific heat capacity of a crystal.

If the entire body is treated as lumped capacitance thermal energy reservoir, with a total thermal energy content which is proportional to simple total heat capacity

, the temperature of the body, or

, it is expected that the system will experience exponential decay with time in the temperature of a body.

From the definition of heat capacity

. Differentiating this equation with regard to time gives the identity (valid so long as temperatures in the object are uniform at any given time):

. This expression may be used to replace

in the first equation which begins this section, above. Then, if

is the temperature of such a body at time

is the temperature of the environment around the body:

is a positive constant characteristic of the system, which must be in units of

, and is therefore sometimes expressed in terms of a characteristic time constant

multiplied by its mass

, so that the time constant

is also given by

The solution of this differential equation, by standard methods of integration and substitution of boundary conditions, gives:

is the initial temperature difference at time 0,

then the Newtonian solution is written as:

, as a single function of time to be found, or "solved for."