An example of congruence. The two triangles on the left are congruent, while the third is similar to them. The last triangle is neither similar nor congruent to any of the others. Note that congruence permits alteration of some properties, such as location and orientation, but leaves others unchanged, like distance and angles. The unchanged properties are called invariants.

In geometry, two figures or objects are congruent if they have the same shape and size, or if one has the same shape and size as the mirror image of the other.[1] More formally, two sets of points are called congruent if, and only if, one can be transformed into the other by an isometry, i.e., a combination of rigid motions, namely a translation, a rotation, and a reflection. This means that either object can be repositioned and reflected (but not resized) so as to coincide precisely with the other object. So two distinct plane figures on a piece of paper are congruent if we can cut them out and then match them up completely. Turning the paper over is permitted.

The related concept of similarity applies if the objects differ in size but not in shape. 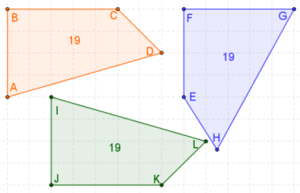 The orange and green quadrilaterals are congruent; the blue is not congruent to them. All three have the same perimeter and area. (The ordering of the sides of the blue quadrilateral is "mixed" which results in two of the interior angles and one of the diagonals not being congruent.)

Congruence of polygons can be established graphically as follows:

If at anytime the step cannot be completed, the polygons are not congruent.

If triangle ABC is congruent to triangle DEF, the relationship can be written mathematically as:

In many cases it is sufficient to establish the equality of three corresponding parts and use one of the following results to deduce the congruence of the two triangles. 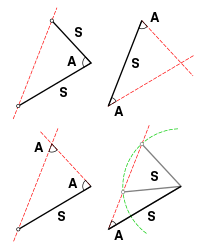 Sufficient evidence for congruence between two triangles in Euclidean space can be shown through the following comparisons:

The SSA condition (Side-Side-Angle) which specifies two sides and a non-included angle (also known as ASS, or Angle-Side-Side) does not by itself prove congruence. In order to show congruence, additional information is required such as the measure of the corresponding angles and in some cases the lengths of the two pairs of corresponding sides. There are a few possible cases:

If two triangles satisfy the SSA condition and the length of the side opposite the angle is greater than or equal to the length of the adjacent side, then the two triangles are congruent. The opposite side is sometimes longer when the corresponding angles are acute, but it is always longer when the corresponding angles are right or obtuse. Where the angle is a right angle, also known as the Hypotenuse-Leg (HL) postulate or the Right-angle-Hypotenuse-Side (RHS) condition, the third side can be calculated using the Pythagorean Theorem thus allowing the SSS postulate to be applied.

However, in spherical geometry and hyperbolic geometry (where the sum of the angles of a triangle varies with size) AAA is sufficient for congruence on a given curvature of surface.[4]

Congruent triangles on a sphere

As with plane triangles, on a sphere two triangles sharing the same sequence of angle-side-angle (ASA) are necessarily congruent (that is, they have three identical sides and three identical angles).[5] This can be seen as follows: One can situate one of the vertices with a given angle at the south pole and run the side with given length up the prime meridian. Knowing both angles at either end of the segment of fixed length ensures that the other two sides emanate with a uniquely determined trajectory, and thus will meet each other at a uniquely determined point; thus ASA is valid.

The congruence theorems side-angle-side (SAS) and side-side-side (SSS) also hold on a sphere; in addition, if two spherical triangles have an identical angle-angle-angle (AAA) sequence, they are congruent (unlike for plane triangles).[5]

The plane-triangle congruence theorem angle-angle-side (AAS) does not hold for spherical triangles.[6] As in plane geometry, side-side-angle (SSA) does not imply congruence.

Definition of congruence in analytic geometry

In a Euclidean system, congruence is fundamental; it is the counterpart of equality for numbers. In analytic geometry, congruence may be defined intuitively thus: two mappings of figures onto one Cartesian coordinate system are congruent if and only if, for any two points in the first mapping, the Euclidean distance between them is equal to the Euclidean distance between the corresponding points in the second mapping.

A more formal definition states that two subsets A and B of Euclidean space Rn are called congruent if there exists an isometry f : Rn → Rn (an element of the Euclidean group E(n)) with f(A) = B. Congruence is an equivalence relation.

Two conic sections are congruent if their eccentricities and one other distinct parameter characterizing them are equal. Their eccentricities establish their shapes, equality of which is sufficient to establish similarity, and the second parameter then establishes size. Since two circles, parabolas, or rectangular hyperbolas always have the same eccentricity (specifically 0 in the case of circles, 1 in the case of parabolas, and