{{#invoke:Hatnote|hatnote}} In mathematics, complex multiplication is the theory of elliptic curves E that have an endomorphism ring larger than the integers; and also the theory in higher dimensions of abelian varieties A having enough endomorphisms in a certain precise sense (it roughly means that the action on the tangent space at the identity element of A is a direct sum of one-dimensional modules). Put another way, it contains the theory of elliptic functions with extra symmetries, such as are visible when the period lattice is the Gaussian integer lattice or Eisenstein integer lattice.

It has an aspect belonging to the theory of special functions, because such elliptic functions, or abelian functions of several complex variables, are then 'very special' functions satisfying extra identities and taking explicitly calculable special values at particular points. It has also turned out to be a central theme in algebraic number theory, allowing some features of the theory of cyclotomic fields to be carried over to wider areas of application.

David Hilbert is said to have remarked that the theory of complex multiplication of elliptic curves was not only the most beautiful part of mathematics but of all science.[1] 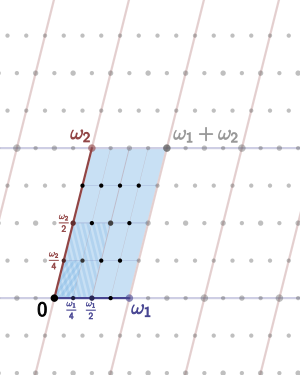 An elliptic curve over the complex numbers is obtained as a quotient of the complex plane by a lattice Λ, here spanned by two fundamental periods ω1 and ω2. The four-torsion is also shown, corresponding to the lattice 1/4 Λ containing Λ.

, which provides the typical example of complex multiplication.

For the two periods

of an elliptic function

Conversely, Kronecker conjectured that every abelian extension of

would be obtained by the (roots of the) equation of a suitable elliptic curve with complex multiplication, known as the Kronecker Jugendtraum and Hilbert's twelfth problem.

An example of an elliptic curve with complex multiplication is

having an order 4 automorphism sending

in line with the action of i on the Weierstrass elliptic functions.

More generally, consider the group of lattice L on the complex plane generated by

. Then we define the Weierstrass function with a variable

be the derivative of

. Then we obtain the isomorphism:

and the elliptic curve

in the complex plane. This means that the ring of analytic automorphic group of

i.e., the ring of automorphisms of

, turn out to be isomorphic to the (subring of) integer rings of

as an ideal of

is agreed with the integer rings

This means that the J-invariants of

belong to the algebraic numbers of

The ring of endomorphisms of an elliptic curve can be of one of three forms:the integers Z; an order in an imaginary quadratic number field; or an order in a definite quaternion algebra over Q.[2]

Kronecker first postulated that the values of elliptic functions at torsion points should be enough to generate all abelian extensions for imaginary quadratic fields, an idea that went back to Eisenstein in some cases, and even to Gauss. This became known as the Kronecker Jugendtraum; and was certainly what had prompted Hilbert's remark above, since it makes explicit class field theory in the way the roots of unity do for abelian extensions of the rational number field, via Shimura's reciprocity law.

Indeed, let K be an imaginary quadratic field with class field H. Let E be an elliptic curve with complex multiplication by the integers of K, defined over H. Then the maximal abelian extension of K is generated by the x-coordinates of the points of finite order on some Weierstrass model for E over H.[3]

Many generalisations have been sought of Kronecker's ideas; they do however lie somewhat obliquely to the main thrust of the Langlands philosophy, and there is no definitive statement currently known.

It is no accident that

is so close to an integer. This remarkable fact is explained by the theory of complex multiplication, together with some knowledge of modular forms, and the fact that

is a unique factorization domain.

satisfies α² = α − 41. In general, S[α] denotes the set of all polynomial expressions in α with coefficients in S, which is the smallest ring containing α and S. Because α satisfies this quadratic equation, the required polynomials can be limited to degree one.

an internal structure due to certain Eisenstein series, and with similar simple expressions for the other Heegner numbers.

The points of the upper half-plane τ which correspond to the period ratios of elliptic curves over the complex numbers with complex multiplication are precisely the imaginary quadratic numbers.[4] The corresponding modular invariants j(τ) are the singular moduli, coming from an older terminology in which "singular" referred to the property of having non-trivial endomorphisms rather than referring to a singular curve.[5]

The modular function j(τ) is algebraic on imaginary quadratic numbers τ:[6] these are the only algebraic numbers in the upper half-plane for which j is algebraic.[7]

If Λ is a lattice with period ratio τ then we write j(Λ) for j(τ). If further Λ is an ideal a in the ring of integers OK of a quadratic imaginary field K then we write j(a) for the corresponding singular modulus. The values j(a) are then real algebraic integers, and generate the Hilbert class field H of K: the field extension degree [H:K] = h is the class number of K and the H/K is a Galois extension with Galois group isomorphic to the ideal class group of K. The class group acts on the values j(a) by [b] : j(a) → j(ab).