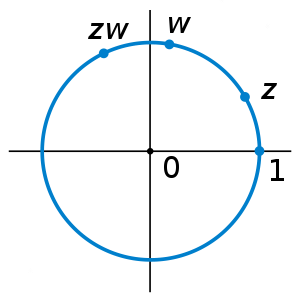 The circle of center 0 and radius 1 in the complex plane is a compact Lie group with complex multiplication.

In mathematics, a compact (topological, often understood) group is a topological group whose topology is compact. Compact groups are a natural generalisation of finite groups with the discrete topology and have properties that carry over in significant fashion. Compact groups have a well-understood theory, in relation to group actions and representation theory.

In the following we will assume all groups are Hausdorff spaces.

The classification theorem of compact Lie groups states that up to finite extensions and finite covers this exhausts the list of examples (which already includes some redundancies).

Given any compact Lie group G one can take its identity component G0, which is connected. The quotient group G/G0 is the group of components π0(G) which must be finite since G is compact. We therefore have a finite extension

is a finite abelian group and

is a product of a torus and a compact, connected, simply-connected Lie group K:

Amongst groups that are not Lie groups, and so do not carry the structure of a manifold, examples are the additive group Zp of p-adic integers, and constructions from it. In fact any profinite group is a compact group. This means that Galois groups are compact groups, a basic fact for the theory of algebraic extensions in the case of infinite degree.

Pontryagin duality provides a large supply of examples of compact commutative groups. These are in duality with abelian discrete groups.

Compact groups all carry a Haar measure,[1] which will be invariant by both left and right translation (the modulus function must be a continuous homomorphism to the positive multiplicative reals, and so 1). In other words these groups are unimodular. Haar measure is easily normalised to be a probability measure, analogous to dθ/2π on the circle.

Such a Haar measure is in many cases easy to compute; for example for orthogonal groups it was known to Hurwitz, and in the Lie group cases can always be given by an invariant differential form. In the profinite case there are many subgroups of finite index, and Haar measure of a coset will be the reciprocal of the index. Therefore integrals are often computable quite directly, a fact applied constantly in number theory.

The representation theory of compact groups was founded by the Peter–Weyl theorem.[2] Hermann Weyl went on to give the detailed character theory of the compact connected Lie groups, based on maximal torus theory. The resulting Weyl character formula was one of the influential results of twentieth century mathematics.

A combination of Weyl's work and Cartan's theorem gives a survey of the whole representation theory of compact groups G . That is, by the Peter–Weyl theorem the irreducible unitary representations ρ of G are into a unitary group (of finite dimension) and the image will be a closed subgroup of the unitary group by compactness. Cartan's theorem states that Im(ρ) must itself be a Lie subgroup in the unitary group. If G is not itself a Lie group, there must be a kernel to ρ. Further one can form an inverse system, for the kernel of ρ smaller and smaller, of finite-dimensional unitary representations, which identifies G as an inverse limit of compact Lie groups. Here the fact that in the limit a faithful representation of G is found is another consequence of the Peter–Weyl theorem,

The unknown part of the representation theory of compact groups is thereby, roughly speaking, thrown back onto the complex representations of finite groups. This theory is rather rich in detail, but is qualitatively well understood.

The topic of recovering a compact group from its representation theory is the subject of the Tannaka–Krein duality, now often recast in term of tannakian category theory.

From compact to non-compact groups

The influence of the compact group theory on non-compact groups was formulated by Weyl in his unitarian trick. Inside a general semisimple Lie group there is a maximal compact subgroup, and the representation theory of such groups, developed largely by Harish-Chandra, uses intensively the restriction of a representation to such a subgroup, and also the model of Weyl's character theory.