The commutativity of addition

In mathematics, a binary operation is commutative if changing the order of the operands does not change the result. It is a fundamental property of many binary operations, and many mathematical proofs depend on it. The commutativity of simple operations, such as multiplication and addition of numbers, was for many years implicitly assumed and the property was not named until the 19th century when mathematics started to become formalized. By contrast, division and subtraction are not commutative.

" is a metalogical symbol representing "can be replaced in a proof with."

Commutativity of implication (also called the Law of permutation)

In group and set theory, many algebraic structures are called commutative when certain operands satisfy the commutative property. In higher branches of mathematics, such as analysis and linear algebra the commutativity of well-known operations (such as addition and multiplication on real and complex numbers) is often used (or implicitly assumed) in proofs.[4][5][6]

Template:Rellink The term "commutative" is used in several related senses.[7][8]

on a set S is called commutative if:

An operation that does not satisfy the above property is called noncommutative.

2. One says that x commutes with y under

is called commutative if:

The first recorded use of the term commutative was in a memoir by François Servois in 1814,[12][13] which used the word commutatives when describing functions that have what is now called the commutative property. The word is a combination of the French word commuter meaning "to substitute or switch" and the suffix -ative meaning "tending to" so the word literally means "tending to substitute or switch." The term then appeared in English in Philosophical Transactions of the Royal Society in 1844.[12]

Most commutative operations encountered in practice are also associative. However, commutativity does not imply associativity. A counterexample is the function

which is clearly commutative (interchanging x and y does not affect the result), but it is not associative (since, for example,

Graph showing the symmetry of the addition function

Some forms of symmetry can be directly linked to commutativity. When a commutative operator is written as a binary function then the resulting function is symmetric across the line y = x. As an example, if we let a function f represent addition (a commutative operation) so that f(x,y) = x + y then f is a symmetric function, which can be seen in the image on the right.

For relations, a symmetric relation is analogous to a commutative operation, in that if a relation R is symmetric, then 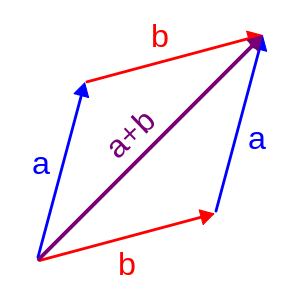 The addition of vectors is commutative, because

For example, the logical biconditional function p ↔ q is equivalent to q ↔ p. This function is also written as p IFF q, or as p ≡ q, or as Epq.
The last form is an example of the most concise notation in the article on truth functions, which lists the sixteen possible binary truth functions of which eight are commutative: Vpq = Vqp; Apq (OR) = Aqp; Dpq (NAND) = Dqp; Epq (IFF) = Eqp; Jpq = Jqp; Kpq (AND) = Kqp; Xpq (NOR) = Xqp; Opq = Oqp.

In quantum mechanics as formulated by Schrödinger, physical variables are represented by linear operators such as x (meaning multiply by x), and

. These two operators do not commute as may be seen by considering the effect of their compositions

(also called products of operators) on a one-dimensional wave function

According to the uncertainty principle of Heisenberg, if the two operators representing a pair of variables do not commute, then that pair of variables are mutually complementary, which means they cannot be simultaneously measured or known precisely. For example, the position and the linear momentum in the x-direction of a particle are represented respectively by the operators

is the reduced Planck constant). This is the same example except for the constant

, so again the operators do not commute and the physical meaning is that the position and linear momentum in a given direction are complementary.

Linear algebra theory. Explains commutativity in chapter 1, uses it throughout.

Translation and interpretation of the Rhind Mathematical Papyrus.

Explanation of the term commute

Article giving the history of the real numbers

Biography of Francois Servois, who first used the term