The Collatz conjecture is a conjecture in mathematics named after Lothar Collatz, who first proposed it in 1937. The conjecture is also known as the 3n + 1 conjecture, the Ulam conjecture (after Stanisław Ulam), Kakutani's problem (after Shizuo Kakutani), the Thwaites conjecture (after Sir Bryan Thwaites), Hasse's algorithm (after Helmut Hasse), or the Syracuse problem;[1][2] the sequence of numbers involved is referred to as the hailstone sequence or hailstone numbers (because the values are usually subject to multiple descents and ascents like hailstones in a cloud),[3][4] or as wondrous numbers.[5]

Take any natural number n. If n is even, divide it by 2 to get n / 2. If n is odd, multiply it by 3 and add 1 to obtain 3n + 1. Repeat the process (which has been called "Half Or Triple Plus One", or HOTPO[6]) indefinitely. The conjecture is that no matter what number you start with, you will always eventually reach 1. The property has also been called oneness.[7]

Paul Erdős said about the Collatz conjecture: "Mathematics may not be ready for such problems."[8] He also offered $500 for its solution.[9]

In 1972, J. H. Conway proved that a natural generalization of the Collatz problem is algorithmically undecidable.[10]

Statement of the problem

Histogram of stopping times for the numbers 1 to 100 million. Stopping time is on the x axis, frequency on the y axis.

Numbers from 1 to 9999 and their corresponding total stopping time.

Consider the following operation on an arbitrary positive integer:

In modular arithmetic notation, define the function f as follows:

Now, form a sequence by performing this operation repeatedly, beginning with any positive integer, and taking the result at each step as the input at the next.

is the value of

The Collatz conjecture is: This process will eventually reach the number 1, regardless of which positive integer is chosen initially.

If the conjecture is false, it can only be because there is some starting number which gives rise to a sequence that does not contain 1. Such a sequence might enter a repeating cycle that excludes 1, or increase without bound. No such sequence has been found. 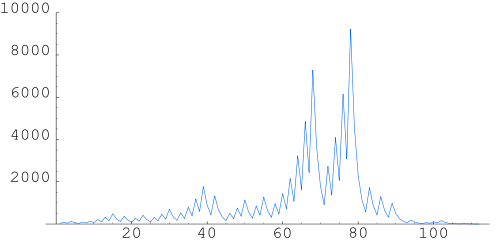 Numbers with a total stopping time longer than any smaller starting value form a sequence beginning with:

For the largest number greater than any smaller starting value, they are

Number of steps for n to reach 1 are

The powers of two converge to one quickly because

times to reach one, and is never increased, but for Mersenne number Mn, they need to increase n times and usually need more steps to reach 1.

Any counterexample to the Collatz conjecture would have to consist either of an infinite divergent trajectory or a cycle different from the trivial (4; 2; 1) cycle. Thus, if one could prove that neither of these types of counterexample could exist, then all natural numbers would have a trajectory that reaches the trivial cycle. Such a strong result is not known, but certain types of cycles have been ruled out.

The type of a cycle may be defined with reference to the "shortcut" definition of the Collatz map,

for odd n and

for even n. A cycle is a sequence

Template:Harvtxt proved that there is no 1-cycle other than the trivial (1;2). Template:Harvtxt used Steiner's method to prove that there is no 2-cycle. Template:Harvtxt extended this proof up to 68-cycles: there is no k-cycle up to k = 68.[14] Beyond 68, this method gives upper bounds for the elements in such a cycle: for example, if there is a 75-cycle, then at least one element of the cycle is less than 2385×250.[14] Therefore as exhaustive computer searches continue, larger cycles may be ruled out. To have the argument more intuitive: we need not look for cycles, where not at least 68 partial trajectories are involved, where one partial trajectory is understood as of either consecutive ups or of consecutive downs (and each of that partial trajectories can involve as many steps as you like).

Although the conjecture has not been proven, most mathematicians who have looked into the problem think the conjecture is true because experimental evidence and heuristic arguments support it.

The conjecture has been checked by computer for all starting values up to 5 × 260 ≈ 5.764Template:E.[15] All initial values tested so far eventually end in the repeating cycle (4; 2; 1), which has only three terms. From this lower bound on the starting value, a lower bound can also be obtained for the number of terms a repeating cycle other than (4; 2; 1) must have.[16] When this relationship was established in 1981, the formula gave a lower bound of 35,400 terms.[16]

If one considers only the odd numbers in the sequence generated by the Collatz process, then each odd number is on average 3/4 of the previous one.[17] (More precisely, the geometric mean of the ratios of outcomes is 3/4.) This yields a heuristic argument that every Hailstone sequence should decrease in the long run, although this is not evidence against other cycles, only against divergence. The argument is not a proof because it assumes that Hailstone sequences are assembled from uncorrelated probabilistic events. (It does rigorously establish that the 2-adic extension of the Collatz process has two division steps for every multiplication step for almost all 2-adic starting values.)

And even if the probabilistic reasoning were rigorous, this would still imply only that the probability of the Collatz conjecture being true for any given integer is 1, which is a far cry from showing it is true for all integers.

Although it is not known rigorously whether all positive numbers eventually reach one according to the Collatz iteration, it is known that many numbers do so. In particular, Krasikov and Lagarias showed that the number of integers in the interval [1,x] that eventually reach one is at least proportional to x0.84.[18]

Other formulations of the conjecture

The first 21 levels of the Collatz graph generated in bottom-up fashion. The graph includes all numbers with an orbit length of 21 or less.

There is another approach to prove the conjecture, which considers the bottom-up method of growing the so-called Collatz graph. The Collatz graph is a graph defined by the inverse relation

When the relation 3n + 1 of the function f is replaced by the common substitute "shortcut" relation (3n + 1)/2, the Collatz graph is defined by the inverse relation,

Conjecturally, this inverse relation forms a tree except for a 1–2 loop (the inverse of the 1–2 loop of the function f(n) revised as indicated above).

As an abstract machine that computes in base two

Repeated applications of the Collatz function can be represented as an abstract machine that handles strings of bits. The machine will perform the following three steps on any odd number until only one "1" remains:

This prescription is plainly equivalent to computing a Hailstone sequence in base two.

The starting number 7 is written in base two as 111. The resulting Hailstone sequence is:

As a parity sequence

For this section, consider the Collatz function in the slightly modified form

What operation is performed (3n + 1)/2 or n/2 depends on the parity. The parity sequence is the same as the sequence of operations.

Using this form for f(n), it can be shown that the parity sequences for two numbers m and n will agree in the first k terms if and only if m and n are equivalent modulo 2k. This implies that every number is uniquely identified by its parity sequence, and moreover that if there are multiple Hailstone cycles, then their corresponding parity cycles must be different.[11][19]

As a tag system

For the Collatz function in the form

Hailstone sequences can be computed by the extremely simple 2-tag system with production rules a → bc, b → a, c → aaa. In this system, the positive integer n is represented by a string of n a, and iteration of the tag operation halts on any word of length less than 2. (Adapted from De Mol.)

The Collatz conjecture equivalently states that this tag system, with an arbitrary finite string of a's as the initial word, eventually halts (see Tag system#Example: Computation of Collatz sequences for a worked example).

Iterating on all integers

An obvious extension is to include all integers, not just positive integers. Leaving aside the trivial cycle 0 → 0, there are a total of 4 known non-trivial cycles, which all nonzero integers seem to eventually fall into under iteration of f. These cycles are listed here, starting with the well-known cycle for positive n:

Odd values are listed in large bold. Each cycle is listed with its member of least absolute value (which is always odd) first.

The Generalized Collatz Conjecture is the assertion that every integer, under iteration by f, eventually falls into one of these five cycles.

The standard Collatz map can be extended to (positive or negative) rational numbers which have odd denominators when written in lowest terms. The number is taken to be odd or even according to whether its numerator is odd or even. A closely related fact is that the Collatz map extends to the ring of 2-adic integers, which contains the ring of rationals with odd denominators as a subring.

Although the cyclic permutations of the original parity sequence are unique fractions, the cycle is not unique, each permutation's fraction being the next number in the loop cycle:

But when reduced to lowest terms {5/7}, it is the same as that of the 4-element sub-sequence

In this context, the Collatz conjecture is equivalent to saying that (0 1) is the only cycle which is generated by positive whole numbers (i.e. 1 and 2).

Iterating on real or complex numbers

If the standard Collatz map defined above is optimized by replacing the relation 3n + 1 with the common substitute "shortcut" relation (3n + 1)/2, it can be viewed as the restriction to the integers of the smooth real and complex map

Iterating the above optimized map in the complex plane produces the Collatz fractal.

The point of view of iteration on the real line was investigated by Chamberland (1996), and on the complex plane by Letherman, Schleicher, and Wood (1999).

Collatz map fractal in a neighbourhood of the real line

The As a parity sequence section above gives a way to speed up simulation of the sequence. To jump ahead k steps on each iteration (using the f function from that section), break up the current number into two parts, b (the k least significant bits, interpreted as an integer), and a (the rest of the bits as an integer). The result of jumping ahead k steps can be found as:

The c and d arrays are precalculated for all possible k-bit numbers b, where d(b) is the result of applying the f function k times to b, and c(b) is the number of odd numbers encountered on the way.[20] For example, if k=5, you can jump ahead 5 steps on each iteration by separating out the 5 least significant bits of a number and using:

This requires 2k precomputation and storage to speed up the resulting calculation by a factor of k, a space-time tradeoff.

holds for all a, then the first counterexample, if it exists, cannot be b modulo 2k.[16] For instance, the first counterexample must be odd because f(2n) = n, smaller than 2n; and it must be 3 mod 4 because f2(4n + 1) = 3n + 1, smaller than 4n + 1. For each starting value a which is not a counterexample to the Collatz conjecture, there is a k for which such an inequality holds, so checking the Collatz conjecture for one starting value is as good as checking an entire congruence class. As k increases, the search only needs to check those residues b that are not eliminated by lower values of k. Only an exponentially small fraction of the residues survive.[21] For example, the only surviving residues mod 32 are 7, 15, 27, and 31.

Some properties of the Syracuse function are:

The Collatz conjecture is equivalent to the statement that, for all k in