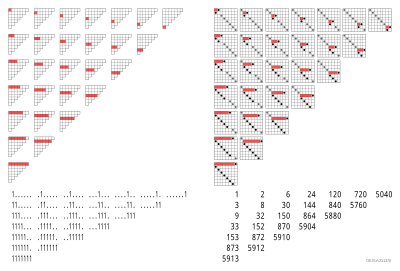 Array of circular shifts to the left   (

A051683)
Corresponding inversion vectors have only one non-zero entry.

For example, repeatedly applying circular shifts to the four-tuple (a, b, c, d) successively gives

In computer programming, a circular shift (or bitwise rotation) is a shift operator that shifts all bits of its operand. Unlike an arithmetic shift, a circular shift does not preserve a number's sign bit or distinguish a number's exponent from its mantissa. Unlike a logical shift, the vacant bit positions are not filled in with zeros but are filled in with the bits that are shifted out of the sequence.

Circular shifts are used often in cryptography in order to permute bit sequences. Unfortunately, many programming languages, including C, do not have operators or standard functions for circular shifting, even though virtually all processors have bitwise operation instructions for it (e.g. Intel x86 has ROL and ROR). However, some compilers may provide access to the processor instructions by means of intrinsic functions. In addition, it is possible to write standard ANSI C code that compiles down to the "rotate" assembly language instruction (on CPUs that have such an instruction). Most C compilers recognize this idiom:

If necessary, circular shift functions can be defined (here in C):

If the bit sequence 0001 0111 were subjected to a circular shift of one bit position... (see images below) 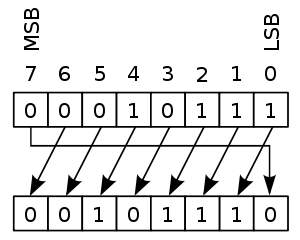 If the bit sequence 0001 0111 were subjected to a circular shift of three bit positions...

Cyclic codes are a kind of block code with the property that the circular shift of a codeword will always yield another codeword. This motivates the following general definition: For a string s over an alphabet Σ, let shift(s) denote the set of circular shifts of s, and for a set L of strings, let shift(L) denote the set of all circular shifts of strings in L. As already noted, if L is a cyclic code, we have L = shift(L). The operation shift(L) has been studied in formal language theory. For instance, if L is a context-free language, then shift(L) is again context-free.[4][5] Also, if L is described by a regular expression of length n, there is a regular expression of length O(n³) describing shift(L).[6]