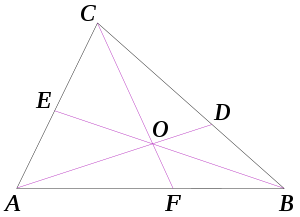 Ceva's theorem, case 1: the three lines are concurrent at a point O inside ABC

Ceva's theorem, case 2: the three lines are concurrent at a point O outside ABC

Ceva's theorem is a theorem about triangles in Euclidean plane geometry. Given a triangle ABC, let the lines AO, BO and CO be drawn from the vertices to a common point O to meet opposite sides at D, E and F respectively. (The segments AD, BE, and CF are known as cevians.) Then, using signed lengths of segments,

In other words the length AB is taken to be positive or negative according to whether A is to the left or right of B in some fixed orientation of the line. For example, AF/FB is defined as having positive value when F is between A and B and negative otherwise.

The converse is also true: If points D, E and F are chosen on BC, AC and AB respectively so that

then AD, BE and CF are concurrent. The converse is often included as part of the theorem.

The theorem is often attributed to Giovanni Ceva, who published it in his 1678 work De lineis rectis. But it was proven much earlier by Yusuf Al-Mu'taman ibn Hűd, an eleventh-century king of Zaragoza.[1]

The theorem is very similar to Menelaus' theorem in that their equations differ only in sign.

Proof of the theorem

(Here directed segments are not used, except in the case of proving using Menelaus' Theorem)

To check the magnitude, note that the area of a triangle of a given height is proportional to its base. So

(Replace the minus with a plus if A and O are on opposite sides of BC.) Similarly,

The theorem can also be proven easily using Menelaus' theorem.[4] From the transversal BOE of triangle ACF,

and from the transversal AOD of triangle BCF,

The theorem follows by dividing these two equations.

The converse follows as a corollary.[5] Let D, E and F be given on the lines BC, AC and AB so that the equation holds. Let AD and BE meet at O and let F′ be the point where CO crosses AB. Then by the theorem, the equation also holds for D, E and F′. Comparing the two,

But at most one point can cut a segment in a given ratio so F=F′.

The theorem can be generalized to higher-dimensional simplexes using barycentric coordinates. Define a cevian of an n-simplex as a ray from each vertex to a point on the opposite (n-1)-face (facet). Then the cevians are concurrent if and only if a mass distribution can be assigned to the vertices such that each cevian intersects the opposite facet at its center of mass. Moreover, the intersection point of the cevians is the center of mass of the simplex. (Landy. See Wernicke for an earlier result.)

Routh's theorem gives the area of the triangle formed by three cevians in the case that they are not concurrent. Ceva's theorem can be obtained from it by setting the area equal to zero and solving.

The analogue of the theorem for general polygons in the plane has been known since the early nineteenth century Template:Harv. The theorem has also been generalized to triangles on other surfaces of constant curvature (Masal'tsev 1994).