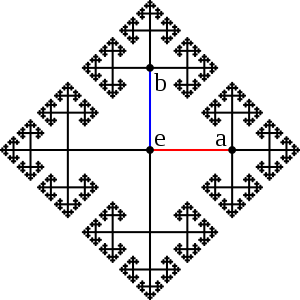 In mathematics, a Cayley graph, also known as a Cayley colour graph, Cayley diagram, group diagram, or colour group[1] is a graph that encodes the abstract structure of a group. Its definition is suggested by Cayley's theorem (named after Arthur Cayley) and uses a specified, usually finite, set of generators for the group. It is a central tool in combinatorial and geometric group theory.

is a group and

is a generating set. The Cayley graph

is a colored directed graph constructed as follows: [2]

In geometric group theory, the set

is usually assumed to be finite, symmetric (i.e.

) and not containing the identity element of the group. In this case, the uncolored Cayley graph is an ordinary graph: its edges are not oriented and it does not contain loops (single-element cycles).

On two generators of Dih4, which are both self-inverse

Part of a Cayley graph of the Heisenberg group. (The coloring is only for visual aid.)

is depicted to the right. The generators used in the picture are the three matrices X, Y, Z given by the three permutations of 1, 0, 0 for the entries x, y, z. They satisfy the relations

, which can also be read off from the picture. This is a non-commutative infinite group, and despite being three-dimensional in some sense, the Cayley graph has four-dimensional volume growth.

acts on itself by the left multiplication (see Cayley's theorem). This action may be viewed as the action of

on its Cayley graph. Explicitly, an element

. The set of edges of the Cayley graph is preserved by this action: the edge

is transformed into the edge

. The left multiplication action of any group on itself is simply transitive, in particular, the Cayley graph is vertex transitive. This leads to the following characterization of Cayley graphs:

is a Cayley graph of a group

if and only if it admits a simply transitive action of

by graph automorphisms (i.e. preserving the set of edges).[4]

To recover the group

and the generating set

from the Cayley graph

and label it by the identity element of the group. Then label each vertex

by the unique element of

as the Cayley graph is the set of labels of the vertices adjacent to the selected vertex. The generating set is finite (this is a common assumption for Cayley graphs) if and only if the graph is locally finite (i.e. each vertex is adjacent to finitely many edges).

In particular, if a group

generators, all of order different from 2, and the set

consists of these generators together with their inverses, then the Cayley graph

is covered by the infinite regular tree of degree

corresponding to the free group on the same set of generators.

If one, instead, takes the vertices to be right cosets of a fixed subgroup

, one obtains a related construction, the Schreier coset graph, which is at the basis of coset enumeration or the Todd–Coxeter process.

Insights into the structure of the group can be obtained by studying the adjacency matrix of the graph and in particular applying the theorems of spectral graph theory.

For infinite groups, the coarse geometry of the Cayley graph is fundamental to geometric group theory. For a finitely generated group, this is independent of choice of finite set of generators, hence an intrinsic property of the group. This is only interesting for infinite groups: every finite group is coarsely equivalent to a point (or the trivial group), since one can choose as finite set of generators the entire group.

Formally, for a given choice of generators, one has the word metric (the natural distance on the Cayley graph), which determines a metric space. The coarse equivalence class of this space is an invariant of the group.

The Cayley Graph was first considered for finite groups by Arthur Cayley in 1878.[2] Max Dehn in his unpublished lectures on group theory from 1909–10 reintroduced Cayley graphs under the name Gruppenbild (group diagram), which led to the geometric group theory of today. His most important application was the solution of the word problem for the fundamental group of surfaces with genus ≥ 2, which is equivalent to the topological problem of deciding which closed curves on the surface contract to a point.[6]