In mathematics, Cauchy's integral formula, named after Augustin-Louis Cauchy, is a central statement in complex analysis. It expresses the fact that a holomorphic function defined on a disk is completely determined by its values on the boundary of the disk, and it provides integral formulas for all derivatives of a holomorphic function. Cauchy's formula shows that, in complex analysis, "differentiation is equivalent to integration": complex differentiation, like integration, behaves well under uniform limits – a result denied in real analysis.

be the circle forming the boundary of D. Then for every a in the interior of D:

where the contour integral is taken counter-clockwise.

The proof of this statement uses the Cauchy integral theorem and similarly only requires f to be complex differentiable. Since the reciprocal of the denominator of the integrand in Cauchy's integral formula can be expanded as a power series in the variable (a − z0), it follows that holomorphic functions are analytic. In particular f is actually infinitely differentiable, with

This formula is sometimes referred to as Cauchy's differentiation formula.

The circle γ can be replaced by any closed rectifiable curve in U which has winding number one about a. Moreover, as for the Cauchy integral theorem, it is sufficient to require that f be holomorphic in the open region enclosed by the path and continuous on its closure.

By using the Cauchy integral theorem, one can show that the integral over C (or the closed rectifiable curve) is equal to the same integral taken over an arbitrarily small circle around a. Since f(z) is continuous, we can choose a circle small enough on which f(z) is arbitrarily close to f(a). On the other hand, the integral

over any circle C centered at a. This can be calculated directly via a parametrization (integration by substitution) 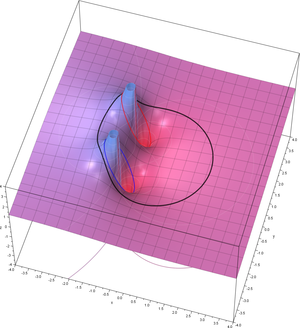 To find the integral of g(z) around the contour C, we need to know the singularities of g(z). Observe that we can rewrite g as follows:

Thus, g has poles at

Now, each of these smaller integrals can be solved by the Cauchy integral formula, but they first must be rewritten to apply the theorem. For the integral around C1, define f1) as f1)(z)=(z-z1)g(z). This is analytic (since the contour does not contain the other singularity). We can simplify f1) to be:

Since the Cauchy integral theorem says that:

we can evaluate the integral as follows:

Doing likewise for the other contour:

The integral around the original contour C then is the sum of these two integrals:

The integral formula has broad applications. First, it implies that a function which is holomorphic in an open set is in fact infinitely differentiable there. Furthermore, it is an analytic function, meaning that it can be represented as a power series. The proof of this uses the dominated convergence theorem and the geometric series applied to

The formula is also used to prove the residue theorem, which is a result for meromorphic functions, and a related result, the argument principle. It is known from Morera's theorem that the uniform limit of holomorphic functions is holomorphic. This can also be deduced from Cauchy's integral formula: indeed the formula also holds in the limit and the integrand, and hence the integral, can be expanded as a power series. In addition the Cauchy formulas for the higher order derivatives show that all these derivatives also converge uniformly.

A version of Cauchy's integral formula is the Cauchy-Pompeiu formula,[2] and holds for smooth functions as well, as it is based on Stokes' theorem. Let D be a disc in C and suppose that f is a complex-valued C1 function on the closure of D. Then Template:Harv

One may use this representation formula to solve the inhomogeneous Cauchy–Riemann equations in D. Indeed, if φ is a function in D, then a particular solution f of the equation is a holomorphic function outside the support of μ. Moreover, if in an open set D,

is also in Ck(D) and satisfies the equation

The first conclusion is, succinctly, that the convolution μ∗k(z) of a compactly supported measure with the Cauchy kernel

is a holomorphic function off the support of μ. Here p.v. denotes the principal value. The second conclusion asserts that the Cauchy kernel is a fundamental solution of the Cauchy–Riemann equations. Note that for smooth complex-valued functions f of compact support on C the generalized Cauchy integral formula simplifies to

and is a restatement of the fact that, considered as a distribution,

is a fundamental solution of the Cauchy-Riemann operator

.[3] The generalized Cauchy integral formula can be deduced for any bounded open region X with C1 boundary ∂X from this result and the formula for the distributional derivative of the characteristic function χX of X:

where the distribution on the right hand side denotes contour integration along ∂X.[4]

In several complex variables, the Cauchy integral formula can be generalized to polydiscs Template:Harv. Let D be the polydisc given as the Cartesian product of n open discs D1, ..., Dn:

Suppose that f is a holomorphic function in D continuous on the closure of D. Then

The Cauchy integral formula is generalizable to real vector spaces of two or more dimensions. The insight into this property comes from geometric algebra, where objects beyond scalars and vectors (such as planar bivectors and volumetric trivectors) are considered, and a proper generalization of Stokes theorem.

under its geometric product—that is, for a

. For example, a vector field (

) generally has in its derivative a scalar part, the divergence (

). This particular derivative operator has a Green's function:

is the surface area of a unit ball in the space (that is,

, the circumference of a circle with radius 1, and

, the surface area of a sphere with radius 1). By definition of a Green's function,

. It is this useful property that can be used, in conjunction with the generalized Stokes theorem:

can, in principle, be composed of any combination of multivectors. The proof of Cauchy's integral theorem for higher dimensional spaces relies on the using the generalized Stokes theorem on the quantity

and use of the product rule:

is called a monogenic function, the generalization of holomorphic functions to higher-dimensional spaces—indeed, it can be shown that the Cauchy–Riemann condition is just the two-dimensional expression of the monogenic condition. When that condition is met, the second term in the right-hand integral vanishes, leaving only

-vector, the pseudoscalar. The result is

Thus, as in the two-dimensional (complex analysis) case, the value of an analytic (monogenic) function at a point can be found by an integral over the surface surrounding the point, and this is valid not only for scalar functions but vector and general multivector functions as well.