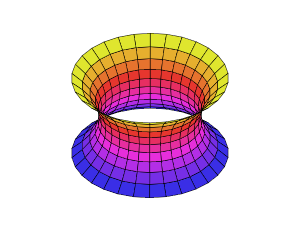 The catenoid may be defined by the following parametric equations:

where u and v are real parameters and c is a non-zero real constant.

Where c is a real constant.

A physical model of a catenoid can be formed by dipping two circles into a soap solution and slowly drawing the circles apart.

Animation showing the deformation of a helicoid into a catenoid.

Because they are members of the same associate family of surfaces, one can bend a catenoid into a portion of a helicoid without stretching. In other words, one can make a (mostly) continuous and isometric deformation of a catenoid to a portion of the helicoid such that every member of the deformation family is minimal (having a mean curvature of zero). A parametrization of such a deformation is given by the system

corresponds to a right-handed helicoid,

corresponds to a catenoid, and

corresponds to a left-handed helicoid.