The Burgess Shale Formation, located in the Canadian Rockies of British Columbia, is one of the world's most celebrated fossil fields.[1] It is famous for the exceptional preservation of the soft parts of its fossils. At Template:Ma (Middle Cambrian) old,[2] it is one of the earliest fossil beds containing soft-part imprints.

The rock unit is a black shale and crops out at a number of localities near the town of Field in Yoho National Park and the Kicking Horse Pass. Another outcrop is in Kootenay National Park 42 km to the south. 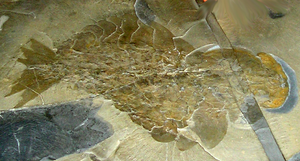 The Burgess Shale was discovered by palaeontologist Charles Walcott on 30 August 1909,[3] towards the end of the season's fieldwork.Template:Fotbs He returned in 1910 with his sons, daughter, and wife, establishing a quarry on the flanks of Fossil Ridge. The significance of soft-bodied preservation, and the range of organisms he recognised as new to science, led him to return to the quarry almost every year until 1924. At that point, aged 74, he had amassed over 65,000 specimens. Describing the fossils was a vast task, pursued by Walcott until his death in 1927.[4] Walcott, led by scientific opinion at the time, attempted to categorise all fossils into living taxa, and as a result, the fossils were regarded as little more than curiosities at the time. It was not until 1962 that a first-hand reinvestigation of the fossils was attempted, by Alberto Simonetta. This led scientists to recognise that Walcott had barely scratched the surface of information available in the Burgess Shale, and also made it clear that the organisms did not fit comfortably into modern groups.

Excavations were resumed at the Walcott Quarry by the Geological Survey of Canada under the persuasion of trilobite expert Harry Blackmore Whittington, and a new quarry, the Raymond, was established about 20 metres higher up Fossil Ridge.[4] Whittington, with the help of research students Derek Briggs and Simon Conway Morris of the University of Cambridge, began a thorough reassessment of the Burgess Shale, and revealed that the fauna represented were much more diverse and unusual than Walcott had recognized.[4] Indeed, many of the animals present had bizarre anatomical features and only the slightest resemblance to other known animals. Examples include Opabinia, with five eyes and a snout like a vacuum cleaner hose and Hallucigenia, which was originally reconstructed upside down, walking on bilaterally symmetrical spines.

With Parks Canada and UNESCO recognising the significance of the Burgess Shale, collecting fossils became politically more difficult from the mid-1970s. Collections continued to be made by the Royal Ontario Museum. The curator of invertebrate palaeontology, Desmond Collins, identified a number of additional outcrops, stratigraphically both higher and lower than the original Walcott quarry.[4] These localities continue to yield new organisms faster than they can be studied.

Stephen Jay Gould's book Wonderful Life, published in 1989, brought the Burgess Shale fossils to the public's attention. Gould suggests that the extraordinary diversity of the fossils indicate that life forms at the time were much more disparate in body form than those that survive today, and that many of the unique lineages were evolutionary experiments that became extinct. Gould's interpretation of the diversity of Cambrian fauna relied heavily on Simon Conway Morris' reinterpretation of Charles Walcott's original publications. However, Conway Morris strongly disagreed with Gould's conclusions, arguing that almost all the Cambrian fauna could be classified into modern day phyla.[5]

In February 2014, the discovery was announced of another Burgess Shale outcrop in Kootenay National Park to the south. In just 15 days of field collecting in 2013, 50 animal species were unearthed at the new site.[6] 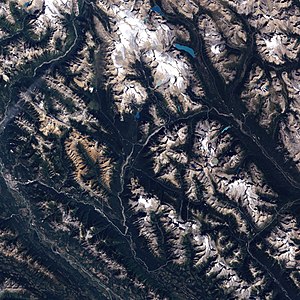 Satellite image of the area.

The fossiliferous deposits of the Burgess Shale correlate to the Stephen formation, a collection of slightly calcareous dark mudstones, about Template:Ma old.[4] The beds were deposited at the base of a cliff about 160 m tall,[4] below the depth agitated by waves during storms.[7] This vertical cliff was composed of the calcareous reefs of the Cathedral Formation, which probably formed shortly before the deposition of the Burgess Shale.[4] The precise formation mechanism is not known for certain, but the most widely accepted hypothesis suggests that the edge of the Cathedral Formation reef became detached from the rest of the reef, slumping and being transported some distance — perhaps kilometers — away from the reef edge.[4] Later reactivation of faults at the base of the formation led to its disintegration from about Template:Ma.[8] This would have left a steep cliff, the bottom of which would be protected, because the limestone of the Cathedral Formation is difficult to compress, from tectonic decompression. This protection explains why fossils preserved further from the Cathedral Formation are impossible to work with — tectonic squeezing of the beds has produced a vertical cleavage that fractures the rocks, so they split perpendicular to the fossils.[4] The Walcott quarry produced such spectacular fossils because it was so close to the Stephen Formation — indeed the quarry has now been excavated to the very edge of the Cambrian cliff.[4]

It was originally thought that the Burgess Shale was deposited in anoxic conditions, but mounting research shows that oxygen was continually present in the sediment.[9] The anoxic setting had been thought to not only protect the newly dead organisms from decay, but it also created chemical conditions allowing the preservation of the soft parts of the organisms. Further, it reduced the abundance of burrowing organisms — burrows and trackways are found in beds containing soft-bodied organisms, but they are rare and generally of limited vertical extent.[4] Brine seeps are an alternative hypothesis - see Burgess Shale type preservation for a more thorough discussion. 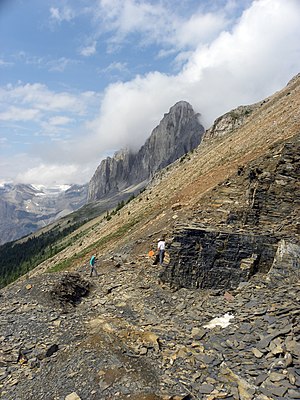 Walcott Quarry of the Burgess Shale showing the Walcott Quarry Shale Member. The white parallel vertical streaks are remnants of drill holes made during excavations in mid-1990s.

The Burgess Shale Formation comprises 10 members, the most famous being the Walcott Quarry Shale Member comprising the greater phyllopod bed.[7]

There are many other comparable Cambrian lagerstätten; indeed such assemblages are far more common in the Cambrian than in any other period. This is mainly due to the limited extent of burrowing activity; as such bioturbation became more prevalent throughout the Cambrian, environments capable of preserving organisms' soft parts became much rarer.[4] (The pre-Cambrian fossil record of animals is sparse and ambiguous.)

The biota of the Burgess Shale appears to be typical of Middle Cambrian deposits.[4] Although the hard-part bearing organisms make up as little as 14% of the community,[4] these same organisms are found in similar proportions in other Cambrian localities. This means that there is no reason to assume that the organisms without hard parts are exceptional in any way; indeed, many appear in other lagerstätten of different age and locations.[4]

The biota consists of a range of organisms. Free-swimming (nectonic) organisms are relatively rare, with the majority of organisms being bottom dwelling (benthic) — either moving about (vagrant) or permanently attached to the sea floor (sessile).[4] About two-thirds of the Burgess Shale organisms lived by feeding on the organic content in the muddy sea floor, while almost a third filtered out fine particles from the water column. Under 10% of organisms were predators or scavengers, although since these organisms were larger, the biomass was split equally among each of the filter feeding, deposit feeding, predatory and scavenging organisms.[4]

Working with the Burgess Shale

The fossils of the Burgess Shale are preserved as black carbon films on black shales, and so are difficult to photograph; however, various photographic techniques can improve the quality of the images that can be acquired.[16] Other techniques include backscatter SEM, elemental mapping and camera lucida drawing.

Once images have been acquired, the effects of decay and taphonomy must be accounted for before a correct anatomical reconstruction can be made. A consideration of the combination of characters allows researchers to establish the taxonomic affinity.