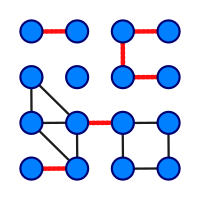 A graph with 16 vertices and 6 bridges (highlighted in red)

An undirected connected graph with no cut edges

In graph theory, a bridge, isthmus, cut-edge, or cut arc is an edge of a graph whose deletion increases its number of connected components.[1] Equivalently, an edge is a bridge if and only if it is not contained in any cycle. A graph is said to be bridgeless or isthmus-free if it contains no bridges.

Another meaning of "bridge" appears in the term bridge of a subgraph. If H is a subgraph of G, a bridge of H in G is a maximal subgraph of G that is not contained in H and is not separated by H.

nodes can contain at most

bridges, since adding additional edges must create a cycle. The graphs with exactly

In every undirected graph, there is an equivalence relation on the vertices according to which two vertices are related to each other whenever there are two edge-disjoint paths connecting them. (Every vertex is related to itself via two length-zero paths, which are identical but nevertheless edge-disjoint.) The equivalence classes of this relation are called 2-edge-connected components, and the bridges of the graph are exactly the edges whose endpoints belong to different components. The bridge-block tree of the graph has a vertex for every nontrivial component and an edge for every bridge.[2]

In a cubic graph, every cut vertex is an endpoint of at least one bridge.

An important open problem involving bridges is the cycle double cover conjecture, due to Seymour and Szekeres (1978 and 1979, independently), which states that every bridgeless graph admits a set of simple cycles which contains each edge exactly twice.[4]

The first linear time algorithm for finding the bridges in a graph was described by Robert Tarjan in 1974.[5] It performs the following steps:

Chain decompositions are special ear decompositions depending on a DFS-tree T of G and can be computed very simply: Let every vertex be marked as unvisited. For each vertex v in ascending DFS-numbers 1...n, traverse every backedge (i.e. every edge not in the DFS tree) that is incident to v and follow the path of tree-edges back to the root of T, stopping at the first vertex that is marked as visited. During such a traversal, every traversed vertex is marked as visited. Thus, a traversal stops at the latest at v and forms either a directed path or cycle, beginning with v; we call this path or cycle a chain. The ith chain found by this procedure is referred to as Ci. C=C1,C2,... is then a chain decomposition of G.

The following characterizations then allow to read off several properties of G from C efficiently, including all bridges of G.[6] Let C be a chain decomposition of a simple connected graph G=(V,E).