In graph theory, breadth-first search (BFS) is a strategy for searching in a graph when search is limited to essentially two operations: (a) visit and inspect a node of a graph; (b) gain access to visit the nodes that neighbor the currently visited node. The BFS begins at a root node and inspects all the neighboring nodes. Then for each of those neighbor nodes in turn, it inspects their neighbor nodes which were unvisited, and so on. Compare BFS with the equivalent, but more memory-efficient Iterative deepening depth-first search and contrast with depth-first search.

BFS was invented in the late 1950s by E. F. Moore and initially used to find the shortest path out of a maze.[1]

Animated example of a breadth-first search 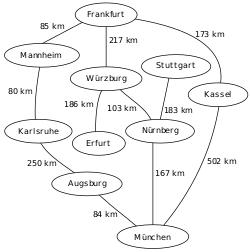 An example map of Germany with some connections between cities 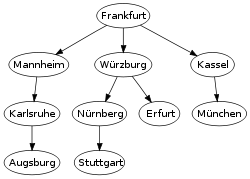 The algorithm uses a queue data structure to store intermediate results as it traverses the graph, as follows:

Input: A graph G and a root v of G

The time complexity can be expressed as

[2] since every vertex and every edge will be explored in the worst case. Note:

, depending on how sparse the input graph is.

When the number of vertices in the graph is known ahead of time, and additional data structures are used to determine which vertices have already been added to the queue, the space complexity can be expressed as

is the cardinality of the set of vertices. If the graph is represented by an Adjacency list it occupies

[3] space in memory, while an Adjacency matrix representation occupies

In the analysis of algorithms, the input to breadth-first search is assumed to be a finite graph, represented explicitly as an adjacency list or similar representation. However, in the application of graph traversal methods in artificial intelligence the input may be an implicit representation of an infinite graph. In this context, a search method is described as being complete if it is guaranteed to find a goal state if one exists. Breadth-first search is complete, but depth-first search is not: when applied to infinite graphs represented implicitly, it may get lost in parts of the graph that have no goal state and never return.[5]

Breadth-first search can be used to solve many problems in graph theory, for example:

The set of nodes reached by a BFS (breadth-first search) form the connected component containing the starting node.