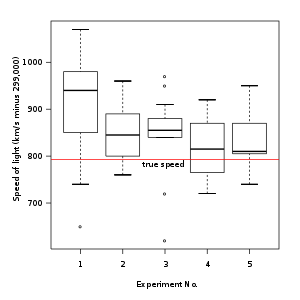 Figure 1. Box plot of data from the Michelson–Morley experiment

In descriptive statistics, a box plot or boxplot is a convenient way of graphically depicting groups of numerical data through their quartiles. Box plots may also have lines extending vertically from the boxes (whiskers) indicating variability outside the upper and lower quartiles, hence the terms box-and-whisker plot and box-and-whisker diagram. Outliers may be plotted as individual points.

Box plots are non-parametric: they display variation in samples of a statistical population without making any assumptions of the underlying statistical distribution. The spacings between the different parts of the box indicate the degree of dispersion (spread) and skewness in the data, and show outliers. In addition to the points themselves, they allow one to visually estimate various L-estimators, notably the interquartile range, midhinge, range, mid-range, and trimean. Boxplots can be drawn either horizontally or vertically. 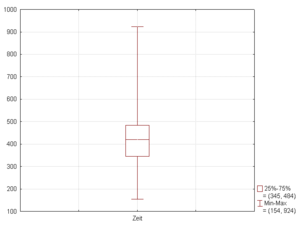 Figure 2. Boxplot with whiskers from minimum to maximum 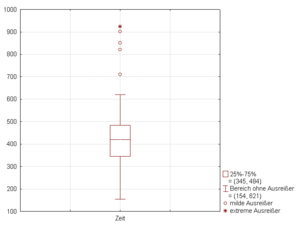 Box and whisker plots are uniform in their use of the box: the bottom and top of the box are always the first and third quartiles, and the band inside the box is always the second quartile (the median). But the ends of the whiskers can represent several possible alternative values, among them:

Any data not included between the whiskers should be plotted as an outlier with a dot, small circle, or star, but occasionally this is not done.

Some box plots include an additional character to represent the mean of the data.[2]

On some box plots a crosshatch is placed on each whisker, before the end of the whisker.

Rarely, box plots can be presented with no whiskers at all.

Because of this variability, it is appropriate to describe the convention being used for the whiskers and outliers in the caption for the plot.

The unusual percentiles 2%, 9%, 91%, 98% are sometimes used for whisker cross-hatches and whisker ends to show the seven-number summary. If the data is normally distributed, the locations of the seven marks on the box plot will be equally spaced.

Figure 4. Four box plots, with and without notches and variable width

Since the American mathematician John W. Tukey introduced this type of visual data display in 1969, several variations on the traditional box plot have been described. Two of the most common are variable width box plots and notched box plots (see figure 4).

Notched box plots apply a "notch" or narrowing of the box around the median. Notches are useful in offering a rough guide to significance of difference of medians; if the notches of two boxes do not overlap, this offers evidence of a statistically significant difference between the medians.[1] The width of the notches is proportional to the interquartile range of the sample and inversely proportional to the square root of the size of the sample. However, there is uncertainty about the most appropriate multiplier (as this may vary depending on the similarity of the variances of the samples).[1] One convention is to use

Figure 5. Boxplot and a probability density function (pdf) of a Normal N(0,1σ2) Population

The box plot is a quick way of examining one or more sets of data graphically. Box plots may seem more primitive than a histogram or kernel density estimate but they do have some advantages. They take up less space and are therefore particularly useful for comparing distributions between several groups or sets of data (see Figure 1 for an example). Choice of number and width of bins techniques can heavily influence the appearance of a histogram, and choice of bandwidth can heavily influence the appearance of a kernel density estimate.