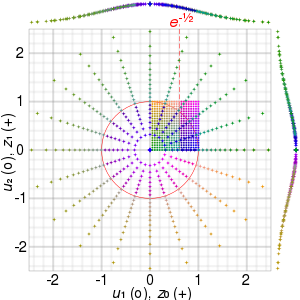 Visualisation of the Box-Muller transform — the coloured points in the unit square (u1, u2), drawn as circles, are mapped to a 2D Gaussian (z0, z1), drawn as crosses. The plots at the margins are the probability distribution functions of z0 and z1. Note that z0 and z1 are unbounded; they appear to be in [-3,3] due to the choice of the illustrated points.

It is commonly expressed in two forms. The basic form as given by Box and Muller takes two samples from the uniform distribution on the interval (0, 1] and maps them to two standard, normally distributed samples. The polar form takes two samples from a different interval, [−1, +1], and maps them to two normally distributed samples without the use of sine or cosine functions.

Suppose U1 and U2 are independent random variables that are uniformly distributed in the interval (0, 1]. Let

Then Z0 and Z1 are independent random variables with a standard normal distribution.

Two uniformly distributed values, u and v are used to produce the value s = R2, which is likewise uniformly distributed. The definitions of the sine and cosine are then applied to the basic form of the Box–Muller transform in order to avoid using trigonometric functions.

The polar form was first proposed by J. Bell[4] and then modified by R. Knop.[5] While several different versions of the polar method have been described, the version of R. Knop will be described here because it is the most widely used, in part due to its inclusion in Numerical Recipes.

. From this we find the probability density function to have the constant value 1 on the interval (0, 1). Equally so, the angle θ divided by

is uniformly distributed in the interval [0, 1) and independent of s.

with that of U2 in the basic form. As shown in the figure, the values of

in the basic form can be replaced with the ratios

Just as the basic form produces two standard normal deviates, so does this alternate calculation.

The basic form requires two multiplications, 1/2 logarithm, 1/2 square root, and one trigonometric function for each normal variate.[7] On some processors, the cosine and sine of the same argument can be calculated in parallel using a single instruction. Notably for Intel-based machines, one can use the fsincos assembler instruction or the expi instruction (usually available from C as an intrinsic function), to calculate complex

and just separate the real and imaginary parts.

The polar form requires 3/2 multiplications, 1/2 logarithm, 1/2 square root, and 1/2 division for each normal variate. The effect is to replace one multiplication and one trigonometric function with a single division.

When a computer is used to produce a uniform random variable it will inevitably have some inaccuracies because there is a lower bound on how close numbers can be to 0. For 32 bit computer the smallest number that can be generated is

This means that the algorithm will not produce random variables more than 6.66 standard deviations from the mean. This corresponds to a proportion of

lost due to the truncation.