Bias of an estimator

In statistics, the bias (or bias function) of an estimator is the difference between this estimator's expected value and the true value of the parameter being estimated. An estimator or decision rule with zero bias is called unbiased. Otherwise the estimator is said to be biased. In statistics, "bias" is an objective statement about a function, and while not a desired property, it is not pejorative, unlike the ordinary English use of the term "bias".

Bias can also be measured with respect to the median, rather than the mean (expected value), in which case one distinguishes median-unbiased from the usual mean-unbiasedness property. Bias is related to consistency in that consistent estimators are convergent and asymptotically unbiased (hence converge to the correct value), though individual estimators in a consistent sequence may be biased (so long as the bias converges to zero); see bias versus consistency.

Suppose we have a statistical model parameterized by θ giving rise to a probability distribution for observed data,

, and a statistic θ^ which serves as an estimator of θ based on any observed data

. That is, we assume that our data follows some unknown distribution

(where θ is a fixed constant that is part of this distribution, but is unknown), and then we construct some estimator θ^ that maps observed data to values that we hope are close to θ. Then the bias of this estimator (relative to the parameter θ) is defined to be

denotes expected value over the distribution

, i.e. averaging over all possible observations

. The second equation follows since θ is measurable with respect to the conditional distribution

An estimator is said to be unbiased if its bias is equal to zero for all values of parameter θ.

There are more general notions of bias and unbiasedness. What this article calls "bias" is called "mean-bias", to distinguish mean-bias from the other notions, with the notable ones being "median-unbiased" estimators. For more details, the general theory of unbiased estimators is briefly discussed near the end of this article.

In a simulation experiment concerning the properties of an estimator, the bias of the estimator may be assessed using the mean signed difference.

Suppose X1, ..., Xn are independent and identically distributed (i.i.d.) random variables with expectation μ and variance σ2. If the sample mean and uncorrected sample variance are defined as

then S2 is a biased estimator of σ2, because

In other words, the expected value of the uncorrected sample variance does not equal the population variance σ2, unless multiplied by a normalization factor. The sample mean, on the other hand, is an unbiased[1] estimator of the population mean μ.

The reason that S2 is biased stems from the fact that the sample mean is an ordinary least squares (OLS) estimator for μ:

is the number that makes the sum

as small as possible. That is, when any other number is plugged into this sum, the sum can only increase. In particular, the choice

Note that the usual definition of sample variance is

and this is an unbiased estimator of the population variance. This can be seen by noting the following formula, which follows from the Bienaymé formula, for the term in the inequality for the expectation of the uncorrected sample variance above:

The ratio between the biased (uncorrected) and unbiased estimates of the variance is known as Bessel's correction.

with a sample of size 1. (For example, when incoming calls at a telephone switchboard are modeled as a Poisson process, and λ is the average number of calls per minute, then e−2λ is the probability that no calls arrive in the next two minutes.)

Since the expectation of an unbiased estimator δ(X) is equal to the estimand, i.e.

the only function of the data constituting an unbiased estimator is

To see this, note that when decomposing e−λ from the above expression for expectation, the sum that is left is a Taylor series expansion of e−λ as well, yielding e−λe−λ = e−2λ (see Characterizations of the exponential function).

is far better than this unbiased estimator. Not only is its value always positive but it is also more accurate in the sense that its mean squared error

is smaller; compare the unbiased estimator's MSE of

The MSEs are functions of the true value λ. The bias of the maximum-likelihood estimator is:

Maximum of a discrete uniform distribution

{{#invoke:main|main}} The bias of maximum-likelihood estimators can be substantial. Consider a case where n tickets numbered from 1 through to n are placed in a box and one is selected at random, giving a value X. If n is unknown, then the maximum-likelihood estimator of n is X, even though the expectation of X is only (n + 1)/2; we can be certain only that n is at least X and is probably more. In this case, the natural unbiased estimator is 2X − 1.

The theory of median-unbiased estimators was revived by George W. Brown in 1947:[4]

An estimate of a one-dimensional parameter θ will be said to be median-unbiased, if, for fixed θ, the median of the distribution of the estimate is at the value θ; i.e., the estimate underestimates just as often as it overestimates. This requirement seems for most purposes to accomplish as much as the mean-unbiased requirement and has the additional property that it is invariant under one-to-one transformation.

Bias with respect to other loss functions 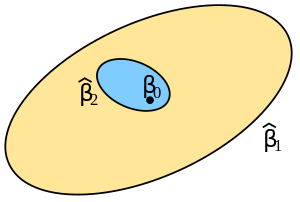 Sampling distributions of two alternative estimators for a parameter β0. Although β1^ is unbiased, it is clearly inferior to the biased β2^.

Ridge regression is one example of a technique where allowing a little bias may lead to a considerable reduction in variance, and more reliable estimates overall.

While bias quantifies the average difference to be expected between an estimator and an underlying parameter, an estimator based on a finite sample can additionally be expected to differ from the parameter due to the randomness in the sample.

One measure which is used to try to reflect both types of difference is the mean square error,

This can be shown to be equal to the square of the bias, plus the variance:

When the parameter is a vector, an analogous decomposition applies:[6]

is the trace of the covariance matrix of the estimator.

An estimator that minimises the bias will not necessarily minimise the mean square error.

For example,[7] suppose an estimator of the form

is sought for the population variance as above, but this time to minimise the MSE:

If the variables X1 ... Xn follow a normal distribution, then nS2/σ2 has a chi-squared distribution with n − 1 degrees of freedom, giving:

More generally it is only in restricted classes of problems that there will be an estimator that minimises the MSE independently of the parameter values.

However it is very common that there may be perceived to be a bias–variance tradeoff, such that a small increase in bias can be traded for a larger decrease in variance, resulting in a more desirable estimator overall.

Most bayesians are rather unconcerned about unbiasedness (at least in the formal sampling-theory sense above) of their estimates. For example, Gelman et al (1995) write: "From a Bayesian perspective, the principle of unbiasedness is reasonable in the limit of large samples, but otherwise it is potentially misleading."[8]

Fundamentally, the difference between the Bayesian approach and the sampling-theory approach above is that in the sampling-theory approach the parameter is taken as fixed, and then probability distributions of a statistic are considered, based on the predicted sampling distribution of the data. For a Bayesian, however, it is the data which is known, and fixed, and it is the unknown parameter for which an attempt is made to construct a probability distribution, using Bayes' theorem:

Here the second term, the likelihood of the data given the unknown parameter value θ, depends just on the data obtained and the modelling of the data generation process. However a Bayesian calculation also includes the first term, the prior probability for θ, which takes account of everything the analyst may know or suspect about θ before the data comes in. This information plays no part in the sampling-theory approach; indeed any attempt to include it would be considered "bias" away from what was pointed to purely by the data. To the extent that Bayesian calculations include prior information, it is therefore essentially inevitable that their results will not be "unbiased" in sampling theory terms.

But the results of a Bayesian approach can differ from the sampling theory approach even if the Bayesian tries to adopt an "uninformative" prior.

For example, consider again the estimation of an unknown population variance σ2 of a Normal distribution with unknown mean, where it is desired to optimise c in the expected loss function

A standard choice of uninformative prior for this problem is the Jeffreys prior,

, which is equivalent to adopting a rescaling-invariant flat prior for ln( σ2).

One consequence of adopting this prior is that S2/σ2 remains a pivotal quantity, i.e. the probability distribution of S2/σ2 depends only on S2/σ2, independent of the value of S2 or σ2:

— when the expectation is taken over the probability distribution of σ2 given S2, as it is in the Bayesian case, rather than S2 given σ2, one can no longer take σ4 as a constant and factor it out. The consequence of this is that, compared to the sampling-theory calculation, the Bayesian calculation puts more weight on larger values of σ2, properly taking into account (as the sampling-theory calculation cannot) that under this squared-loss function the consequence of underestimating large values of σ2 is more costly in squared-loss terms than that of overestimating small values of σ2.

The worked-out Bayesian calculation gives a scaled inverse chi-squared distribution with n − 1 degrees of freedom for the posterior probability distribution of σ2. The expected loss is minimised when cnS2 = <σ2>; this occurs when c = 1/(n − 3).

Even with an uninformative prior, therefore, a Bayesian calculation may not give the same expected-loss minimising result as the corresponding sampling-theory calculation.