Contour plot of the beta function 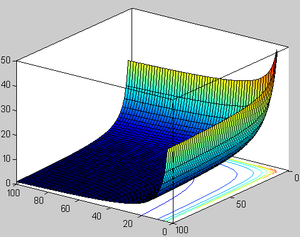 In mathematics, the beta function, also called the Euler integral of the first kind, is a special function defined by

The beta function was studied by Euler and Legendre and was given its name by Jacques Binet; its symbol Β is a Greek capital β rather than the similar Latin capital B.

The beta function is symmetric, meaning that

When x and y are positive integers, it follows from the definition of the gamma function

It has many other forms, including:

The Beta function has several interesting properties, including

is a truncated power function and the star denotes convolution. The lowermost identity above shows in particular

. Some of these identities, e.g. the trigonometric formula, can be applied to deriving the volume of an n-ball in Cartesian coordinates.

This Pochhammer contour integral converges for all values of α and β and so gives the analytic continuation of the beta function.

Just as the gamma function for integers describes factorials, the beta function can define a binomial coefficient after adjusting indices:

can be integrated to give a closed form, an interpolation function for continuous values of k:

The beta function was the first known scattering amplitude in string theory, first conjectured by Gabriele Veneziano. It also occurs in the theory of the preferential attachment process, a type of stochastic urn process.

To derive the integral representation of the beta function, write the product of two factorials as

Changing variables by putting u=zt, v=z(1-t) shows that this is

The stated identity may be seen as a particular case of the identity for the integral of a convolution. Taking

is the digamma function.

The Nörlund–Rice integral is a contour integral involving the beta function.

for large x and large y. If on the other hand x is large and y is fixed, then

The beta function can be extended to a function with more than two arguments, used in the definition of the Dirichlet distribution:

An incomplete beta value can be calculated as: