Ethiopian beadwork on basket, from the ethnographic collection of the National Museum, Addis Ababa

Beadwork is the art or craft of attaching beads to one another by stringing them with a sewing needle or beading needle and thread or thin wire, or sewing them to cloth. Beads come in a variety of materials, shapes and sizes. Beads are used to create jewelry or other articles of personal adornment; they are also used in wall hangings and sculpture and many other crafts.

Most cultures have employed beads for personal adornment. Archaeological records show that people made and used beads as long as 5,000 years ago. Beads have also been used for religious purposes, as good luck talismans, and as curative agents.

Modern beadwork is often used as a creative hobby to create jewelry, purses, coasters, and dozens of other crafts. Beads are available in many different designs, sizes, colors, and materials, allowing much variation among bead artisans and projects. Simple projects can be created in less than an hour by novice beaders, while complex beadwork may take weeks of meticulous work with specialized tools and equipment. 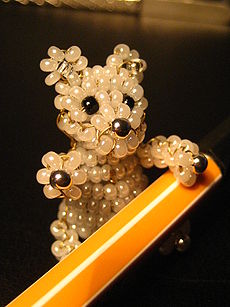 Icebear made of seed beads

3D, or three-dimensional, beading is less common than 2D, or two-dimensional, beading largely because free 3D beading patterns are not widely available on the internet.{{ safesubst:#invoke:Unsubst||date=__DATE__ |$B= {{#invoke:Category handler|main}}{{#invoke:Category handler|main}}[citation needed] }} Resources are scarce and difficult to find. It is mainly an East Asian art form, and most 3D beading resources are written in East Asian languages such as Japanese and Chinese, further impeding access for those in English-speaking countries. 3D beading is widely considered too complex for most beaders to manage although this sentiment is largely due to the apparent complexity of many Asian beading diagrams. It is a challenge for pattern designers to create 2D beading patterns that portray 3D beaded objects.

3D beading generally uses the techniques of bead weaving, which can be further divided into right angle weave and peyote stitch. Most 3D beading patterns are done in right angle weave, but sometimes both techniques are combined in the same piece. Both stitches are done using either fishing line (most popular brand: fireline) or nylon thread (most popular brand: nymo). Fishing line lends itself better to right angle weave because it is stiffer than nylon thread, so it holds the beads in a tighter arrangement and does not easily break when tugged upon. On the other hand, nylon thread is more suited to peyote stitch because it is softer and more pliable than fishing line, which permits the beads of the stitch to sit straight without undue tension bending the arrangement out of place. Right angle weave is done using both ends of the fishing line, in which beads are strung in repeated circular arrangements, and the fishing line is pulled tight after each bead circle is made. Peyote stitch is stitched using only one end of the nylon thread. The other end of the string is left dangling at the beginning of the piece, while the first end of the thread progresses through the stitch. In peyote stitch, beads are woven into the piece in a very similar fashion to knitting or cross stitching. In fact, it is not uncommon for cross stitch patterns to be beaded in peyote stitch technique. Peyote stitch patterns are very easy to depict diagrammatically because they are typically stitched flat and then later incorporated into the piece or simply left as a flat tapestry. Right angle weave lends itself better to 3D beading, but peyote stitch offers the advantage of allowing the beads to be more tightly knit, which is sometimes necessary to portray an object properly in three dimensions.

Beadwork in Europe has a history dating back millennia to a time when shells and animal bones were used as beads in necklaces.

Glass beads were being made in Murano by the end of the 14th century. French beaded flowers were being made as early as the 16th century, and lampwork glass was invented in the 18th century. Seed beads began to be used for embroidery, crochet, and numerous off-loom techniques. 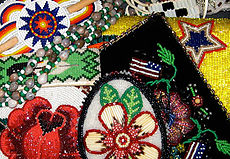 Beadwork is a quintessentially Native American art form but, ironically, uses beads imported from Europe and Asia. Glass beads have been in use for almost five centuries in the Americas. Today a wide range of beading styles flourish.

In the Great Lakes, Ursuline nuns introduced floral patterns to tribes who quickly applied them to beadwork.[1] Great Lakes tribes are known for their bandolier bags that might take an entire year to complete.[2] During the 20th century the Plateau tribes, such as the Nez Perce, perfected contour-style beadwork in which the lines of beads are stitched to emphasize the pictorial imagery. Plains tribes are master beaders, and today dance regalia for men and women feature a variety of beadwork styles. While Plains and Plateau tribes are renowned for their beaded horse trappings, Subarctic tribes such as the Dene create lavish beaded floral dog blankets.[3] Eastern tribes have a completely different beadwork aesthetic: Innu, Mi'kmaq, Penobscot, and Haudenosaunee tribes are known for symmetrical scroll motifs in white beads, called the "double curve."[4] Iroquois are also known for "embossed" beading in which strings pulled taut force beads to pop up from the surface, creating a bas-relief. Tammy Rahr (Cayuga) is a contemporary practitioner of this style. Zuni artists have developed a tradition of three-dimensional beaded sculptures.

Huichol Indians of Jalisco and Nayarit, Mexico have a completely unique approach to beadwork. They adhere beads one by one to a surface such as wood or a gourd with a mixture of resin and beeswax.[5]

Most Native beadwork is created for tribal use, but beadworkers also create conceptual work for the art world. Richard Aitson (Kiowa-Apache), enjoying both an Indian and non-Indian audience, is known for his fully beaded cradleboards. Another Kiowa beadworker, Teri Greeves, has won top honors for her beadwork which consciously integrates both traditional and contemporary motifs such as beaded dancers on Converse high-tops. Greeves also beads on buckskin and explores such issues as warfare or Native American voting rights.[6]

Roger Amerman, Marcus' brother, and Martha Berry, Cherokee, have effectively revived Southeastern beadwork, a style that had been lost because of the forced removal of their tribes to Indian Territory. Their beadwork commonly features white bead outlines, an echo of the shell beads or pearls Southeastern tribes used before contact.[8]

Jamie Okuma (Luiseño-Shoshone-Bannock) has won top awards with her beaded dolls, which can include entire families or horses and riders, all with fully beaded regalia. The antique Venetian beads she uses can be as small as size 22°, about the size of a grain of salt.[9] Juanita Growing Thunder Fogarty, Rhonda Holy Bear, and Charlene Holy Bear are also prominent beaded doll makers.

The widespread popularity of glass beads does not mean aboriginal bead making is dead. Perhaps the most famous Native bead is wampum, a cylindrical tube of quahog or whelk shell. Both shells produce white beads, but only parts of the quahog produce purple. These shell beads are ceremonially and politically important to a range of Eastern tribes.[10]