{{#invoke:Hatnote|hatnote}} In physics, attenuation (in some contexts also called extinction) is the gradual loss in intensity of any kind of flux through a medium. For instance, sunlight is attenuated by dark glasses, X-rays are attenuated by lead, and light and sound are attenuated by water.

In electrical engineering and telecommunications, attenuation affects the propagation of waves and signals in electrical circuits, in optical fibers, and in air (radio waves).

In many cases, attenuation is an exponential function of the path length through the medium. In chemical spectroscopy, this is known as the Beer-Lambert law.

In engineering, attenuation is usually measured in units of decibels per unit length of medium (dB/cm, dB/km, etc.) and is represented by the attenuation coefficient of the medium in question.[1] 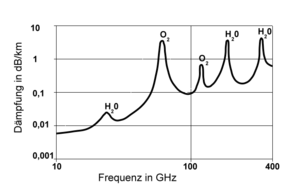 Attenuation also occurs in earthquakes; when the seismic waves move farther away from the epicenter, they grow smaller as they are attenuated by the ground.

) can be used to determine total attenuation in dB in the medium using the following formula:

There are two general ways of acoustic energy losses: absorption and scattering, for instance light scattering.[7] Ultrasound propagation through homogeneous media is associated only with absorption and can be characterized with absorption coefficient only. Propagation through heterogeneous media requires taking into account scattering.[8] Fractional derivative wave equations can be applied for modeling of lossy acoustical wave propagation, see also acoustic attenuation and Ref.[4]

In near-shore (coastal) waters, sea water contains more phytoplankton than the very clear central ocean waters. Chlorophyll-a pigments in the phytoplankton absorb light, and the plants themselves scatter light, making coastal waters less clear than open waters. Chlorophyll-a absorbs light most strongly in the shortest wavelengths (blue and violet) of the visible spectrum. In near-shore waters where there are high concentrations of phytoplankton, the green wavelength reaches the deepest in the water column and the color of water to an observer appears green-blue or green.

The energy with which an earthquake affects a location depends on the running distance. The attenuation in the signal of ground motion intensity plays an important role in the assessment of possible strong groundshaking. A seismic wave loses energy as it propagates through the earth (attenuation). This phenomenon is tied in to the dispersion of the seismic energy with the distance. There are two types of dissipated energy:

The primary causes of attenuation in matter are the photoelectric effect, compton scattering, and, for photon energies of above 1.022 MeV, pair production.

Attenuation in fiber optics, also known as transmission loss, is the reduction in intensity of the light beam (or signal) with respect to distance travelled through a transmission medium. Attenuation coefficients in fiber optics usually use units of dB/km through the medium due to the relatively high quality of transparency of modern optical transmission media. The medium is typically a fiber of silica glass that confines the incident light beam to the inside. Attenuation is an important factor limiting the transmission of a digital signal across large distances. Thus, much research has gone into both limiting the attenuation and maximizing the amplification of the optical signal. Empirical research has shown that attenuation in optical fiber is caused primarily by both scattering and absorption.

[9] Attenuation in fiber optics can be quantified using the following equation:[10] 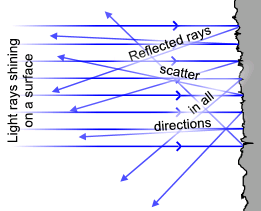 The propagation of light through the core of an optical fiber is based on total internal reflection of the lightwave. Rough and irregular surfaces, even at the molecular level of the glass, can cause light rays to be reflected in many random directions. This type of reflection is referred to as "diffuse reflection", and it is typically characterized by wide variety of reflection angles. Most objects that can be seen with the naked eye are visible due to diffuse reflection. Another term commonly used for this type of reflection is "light scattering". Light scattering from the surfaces of objects is our primary mechanism of physical observation. [11] [12] Light scattering from many common surfaces can be modelled by lambertian reflectance.

Light scattering depends on the wavelength of the light being scattered. Thus, limits to spatial scales of visibility arise, depending on the frequency of the incident lightwave and the physical dimension (or spatial scale) of the scattering center, which is typically in the form of some specific microstructural feature. For example, since visible light has a wavelength scale on the order of one micrometer (one millionth of a meter), scattering centers will have dimensions on a similar spatial scale.

Thus, attenuation results from the incoherent scattering of light at internal surfaces and interfaces. In (poly)crystalline materials such as metals and ceramics, in addition to pores, most of the internal surfaces or interfaces are in the form of grain boundaries that separate tiny regions of crystalline order. It has recently been shown that, when the size of the scattering center (or grain boundary) is reduced below the size of the wavelength of the light being scattered, the scattering no longer occurs to any significant extent. This phenomenon has given rise to the production of transparent ceramic materials.

Likewise, the scattering of light in optical quality glass fiber is caused by molecular-level irregularities (compositional fluctuations) in the glass structure. Indeed, one emerging school of thought is that a glass is simply the limiting case of a polycrystalline solid. Within this framework, "domains" exhibiting various degrees of short-range order become the building-blocks of both metals and alloys, as well as glasses and ceramics. Distributed both between and within these domains are microstructural defects that will provide the most ideal locations for the occurrence of light scattering. This same phenomenon is seen as one of the limiting factors in the transparency of IR missile domes.[13]

In addition to light scattering, attenuation or signal loss can also occur due to selective absorption of specific wavelengths, in a manner similar to that responsible for the appearance of color. Primary material considerations include both electrons and molecules as follows:

The selective absorption of infrared (IR) light by a particular material occurs because the selected frequency of the light wave matches the frequency (or an integral multiple of the frequency) at which the particles of that material vibrate. Since different atoms and molecules have different natural frequencies of vibration, they will selectively absorb different frequencies (or portions of the spectrum) of infrared (IR) light.

Attenuation of light is also important in physical oceanography. This same effect is an important consideration in weather radar, as raindrops absorb a part of the emitted beam that is more or less significant, depending on the wavelength used.

{{#invoke:main|main}} Attenuation is an important consideration in the modern world of wireless telecommunication. Attenuation limits the range of radio signals and is affected by the materials a signal must travel through (e.g., air, wood, concrete, rain). See the article on path loss for more information on signal loss in wireless communication.