Area of a disk

Modern mathematics can obtain the area using the methods of integral calculus or its more sophisticated offspring, real analysis. However the area of circles was studied by the Ancient Greeks. Eudoxus of Cnidus in the fifth century B.C. had found that the areas of circles are proportional to their radius squared.[1] The great mathematician Archimedes used the tools of Euclidean geometry to show that the area inside a circle is equal to that of a right triangle whose base has the length of the circle's circumference and whose height equals the circle's radius in his book Measurement of a Circle. The circumference is 2πr, and the area of a triangle is half the base times the height, yielding the area πr2 for the disk. Prior to Archimedes, Hippocrates of Chios was the first to show that the area of a disk is proportional to the square of its diameter, as part of his quadrature of the lune of Hippocrates,[2] but did not identify the constant of proportionality.

Following Template:Harvtxt, compare a circle to a right triangle whose base has the length of the circle's circumference and whose height equals the circle's radius. If the area of the circle is not equal to that of the triangle, then it must be either greater or less. We eliminate each of these by contradiction, leaving equality as the only possibility. We use regular polygons in the same way.

Suppose the circle area, C, may be greater than the triangle area, T = 1⁄2cr. Let E denote the excess amount. Inscribe a square in the circle, so that its four corners lie on the circle. Between the square and the circle are four segments. If the total area of those gaps, G4, is greater than E, split each arc in half. This makes the inscribed square into an inscribed octagon, and produces eight segments with a smaller total gap, G8. Continue splitting until the total gap area, Gn, is less than E. Now the area of the inscribed polygon, Pn = C − Gn, must be greater than that of the triangle.

But this forces a contradiction, as follows. Draw a perpendicular from the center to the midpoint of a side of the polygon; its length, h, is less than the circle radius. Also, let each side of the polygon have length s; then the sum of the sides, ns, is less than the circle circumference. The polygon area consists of n equal triangles with height h and base s, thus equals 1⁄2nhs. But since h < r and ns < c, the polygon area must be less than the triangle area, 1⁄2cr, a contradiction. Therefore our supposition that C might be greater than T must be wrong. 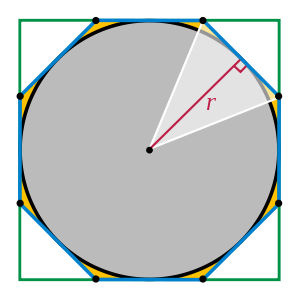 Suppose the circle area may be less than the triangle area. Let D denote the deficit amount. Circumscribe a square, so that the midpoint of each edge lies on the circle. If the total area gap between the square and the circle, G4, is greater than D, slice off the corners with circle tangents to make a circumscribed octagon, and continue slicing until the gap area is less than D. The area of the polygon, Pn, must be less than T.

This, too, forces a contradiction. For, a perpendicular to the midpoint of each polygon side is a radius, of length r. And since the total side length is greater than the circumference, the polygon consists of n identical triangles with total area greater than T. Again we have a contradiction, so our supposition that C might be less than T must be wrong as well. 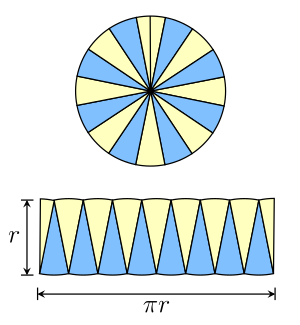 Following Satō Moshun Template:Harv and Leonardo da Vinci Template:Harv, we can use inscribed regular polygons in a different way. Suppose we inscribe a hexagon. Cut the hexagon into six triangles by splitting it from the center. Two opposite triangles both touch two common diameters; slide them along one so the radial edges are adjacent. They now form a parallelogram, with the hexagon sides making two opposite edges, one of which is the base, s. Two radial edges form slanted sides, and the height is h (as in the Archimedes proof). In fact, we can assemble all the triangles into one big parallelogram by putting successive pairs next to each other. The same is true if we increase to eight sides and so on. For a polygon with 2n sides, the parallelogram will have a base of length ns, and a height h. As the number of sides increases, the length of the parallelogram base approaches half the circle circumference, and its height approaches the circle radius. In the limit, the parallelogram becomes a rectangle with width πr and height r. 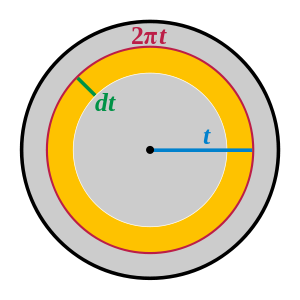 Area of the disk via ring integration

Using calculus, we can sum the area incrementally, partitioning the disk into thin concentric rings like the layers of an onion. This is the method of shell integration in two dimensions. For an infinitesimally thin ring of the "onion" of radius t, the accumulated area is 2πt dt, the circumferential length of the ring times its infinitesimal width (you can approach this ring by a rectangle with width=2πt and height=dt). This gives an elementary integral for a disk of radius r.

Similar to the onion proof outlined above, we could exploit calculus in a different way in order to arrive at the formula for the area of a circle. In this case, we imagine dividing up a circle into triangles, each with a base of length equal to the circle's radius and a height that is infinitesimally small. The area of each of these triangles is equal to 1/2 * r * dt. By summing up (integrating) all of the areas of these triangles, we arrive at the formula for the circle's area:

The calculations Archimedes used to approximate the area numerically were laborious, and he stopped with a polygon of 96 sides. A faster method uses ideas of Willebrord Snell (Cyclometricus, 1621), further developed by Christiaan Huygens (De Circuli Magnitudine Inventa, 1654), described in Template:Harvtxt.

Given a circle, let un be the perimeter of an inscribed regular n-gon, and let Un be the perimeter of a circumscribed regular n-gon. Then un and Un are lower and upper bounds for the circumference of the circle that become sharper and sharper as n increases, and their average (un + Un)/2 is an especially good approximation to the circumference. To compute un and Un for large n, Archimedes derived the following doubling formulae:

Starting from a hexagon, Archimedes doubled n four times to get a 96-gon, which gave him a good approximation to the circumference of the circle.

Snell proposed (and Huygens proved) a tighter bound than Archimedes': 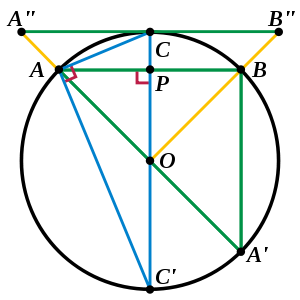 Let one side of an inscribed regular n-gon have length sn and touch the circle at points A and B. Let A′ be the point opposite A on the circle, so that A′A is a diameter, and A′AB is an inscribed triangle on a diameter. By Thales' theorem, this is a right triangle with right angle at B. Let the length of A′B be cn, which we call the complement of sn; thus cn2+sn2 = (2r)2. Let C bisect the arc from A to B, and let C′ be the point opposite C on the circle. Thus the length of CA is s2n, the length of C′A is c2n, and C′CA is itself a right triangle on diameter C′C. Because C bisects the arc from A to B, C′C perpendicularly bisects the chord from A to B, say at P. Triangle C′AP is thus a right triangle, and is similar to C′CA since they share the angle at C′. Thus all three corresponding sides are in the same proportion; in particular, we have C′A : C′C = C′P : C′A and AP : C′A = CA : C′C. The center of the circle, O, bisects A′A, so we also have triangle OAP similar to A′AB, with OP half the length of A′B. In terms of side lengths, this gives us

In the first equation C′P is C′O+OP, length r+1⁄2cn, and C′C is the diameter, 2r. For a unit circle we have the famous doubling equation of Ludolph van Ceulen,

Call the inscribed perimeter un = nsn, and the circumscribed perimenter Un = nSn. Then combining equations, we have

This gives a geometric mean equation.

We can also deduce

This gives a harmonic mean equation.

When more efficient methods of finding areas are not available, we can resort to “throwing darts”. This Monte Carlo method uses the fact that if random samples are taken uniformly scattered across the surface of a square in which a disk resides, the proportion of samples that hit the disk approximates the ratio of the area of the disk to the area of the square. This should be considered a method of last resort for computing the area of a disk (or any shape), as it requires an enormous number of samples to get useful accuracy; an estimate good to 10−n requires about 100n random samples Template:Harv.

We have seen that by partitioning the disk into an infinite number of pieces we can reassemble the pieces into a rectangle. A remarkable fact discovered relatively recently Template:Harv is that we can dissect the disk into a large but finite number of pieces and then reassemble the pieces into a square of equal area. This is called Tarski's circle-squaring problem. The nature of Laczkovich's proof is such that it proves the existence of such a partition (in fact, of many such partitions) but does not exhibit any particular partition.

We can stretch a disk to form an ellipse. Because this stretch is a linear transformation of the plane, it has a distortion factor which will change the area but preserve ratios of areas. This observation can be used to compute the area of an arbitrary ellipse from the area of a unit circle.

We can also consider analogous measurements in higher dimensions. For example, we may wish to find the volume inside a sphere. When we have a formula for the surface area, we can use the same kind of “onion” approach we used for the disk.

Circle unwrapped to form a triangle

The circle and the triangle are equal in area.

This approach is a slight modification of onion proof. Consider unwrapping the concentric circles to straight strips. This will form a right angled triangle with r as its height and 2πr (being the outer slice of onion) as its base.