|} Arcturus (Template:IPAc-en; α Boo, α Boötis, Alpha Boötis) of the constellation Boötes is the brightest star in the northern celestial hemisphere. With a visual magnitude of −0.04, it is the fourth brightest star in the night sky, after −1.46 magnitude Sirius, −0.86 magnitude Canopus, and −0.27 magnitude Alpha Centauri. It is a relatively close star at only 36.7 light-years from Earth, and, together with Vega and Sirius, one of the most luminous stars in the Sun's neighborhood.

Arcturus is a type K1.5 IIIpe orange giant star, with an absolute magnitude of −0.30. It has likely exhausted its hydrogen from the core and is currently in its active hydrogen shell burning phase. It will continue to expand before entering horizontal branch stage of its life cycle.

As one of the brightest stars in the sky, Arcturus has been significant to observers since antiquity. In Mesopotamia, it was linked to the god Enlil, and also known as Shudun, "yoke",[6] or SHU-PA of unknown derivation in the Three Stars Each Babylonian star catalogues and later MUL.APIN around 1100 BC.[7]

Prehistoric Polynesian navigators knew Arcturus as Hōkūleʻa, the "Star of Joy". Arcturus is the zenith star of the Hawaiian Islands. Using Hōkūleʻa and other stars, the Polynesians launched their double-hulled canoes from Tahiti and the Marquesas Islands. Traveling east and north they eventually crossed the equator and reached the latitude at which Arcturus would appear directly overhead in the summer night sky. Knowing they had arrived at the exact latitude of the island chain, they sailed due west on the trade winds to landfall. If Hōkūleʻa could be kept directly overhead, they landed on the southeastern shores of the Big Island of Hawaiʻi. For a return trip to Tahiti the navigators could use Sirius, the zenith star of that island. Since 1976, the Polynesian Voyaging Society's Hōkūle‘a has crossed the Pacific Ocean many times under navigators who have incorporated this wayfinding technique in their non-instrument navigation.

The French mathematician and astronomer Jean-Baptiste Morin observed Arcturus in the daytime with a telescope (a first for any star other than the sun) in 1635, and Arcturus has been seen at or just before sunset with the naked eye.[8]

According to the Hipparcos satellite, Arcturus is 36.7 light years (11.3 parsecs) from Earth, relatively close in astronomical terms.

Arcturus has a visual magnitude of −0.04, making it the brightest star north of the celestial equator, and the fourth brightest star in the night sky.[9] However, Alpha Centauri is a bright binary star, whose unresolved components to the naked eye are both fainter than Arcturus. This makes Arcturus the third brightest individual star, just ahead of Alpha Centauri A (α Cen A), whose visual magnitude is −0.01.[8]

Arcturus is visible from both Earth's hemispheres as it is located 19° north of the celestial equator. The star culminates at midnight on 27 April, and at 9PM on June 10 being visible during the late northern spring or the southern autumn.[10] From the northern hemisphere, an easy way to find Arcturus is to follow the arc of the handle of the Big Dipper. By continuing in this path, one can find Spica, "Arc to Arcturus, then spike to Spica".

Eta Bootis, or Muphrid, is only 3.3 light years distant from Arcturus, and would have a visual magnitude −2.5, whereas an observer on the former system would find Arcturus as bright as Venus as seen from Earth.[8]

Arcturus is a type K1.5 IIIpe Red giant star—the letters "pe" stand for "peculiar emission," which indicates that the spectrum of light given off by the star is unusual and full of emission lines. This is not too uncommon in red giants, but Arcturus has a particularly strong case of the phenomenon. It is at least 110 times visually more luminous than the Sun, but this underestimates its strength as much of the "light" it gives off is in the infrared; total (bolometric) power output is about 180 times that of the Sun. The lower output in visible light is due to a lower efficacy as the star has a lower surface temperature than the Sun. With a near-infrared J band magnitude of −2.2,[1] only Betelgeuse (−2.9) and R Doradus (−2.6) are brighter.

As the brightest K-type giant in the sky, it was the subject of an atlas of its visible spectrum, made from photographic spectra taken with the coudé spectrograph of the Mt. Wilson 2.5m telescope published in 1968,[11] a key reference work for stellar spectroscopy. Subsequent spectral atlases [12] [13] [14] with greater wavelength coverage and superior signal-to-noise ratio made with digital detectors have supplanted the older work, but the Arcturus spectrum remains an important standard for stellar spectroscopy.

As one of the brightest stars in the sky, Arcturus has been the subject of a number of studies in the emerging field of asteroseismology.

Belmonte et al. (1990) carried out a radial velocity (Doppler shift of spectral lines) study of the star in April and May 1988, which showed variability with a frequency of the order of a few microhertz, the highest peak corresponding to 4.3 μHz (2.7 days) with an amplitude of 60 ms−1, with a frequency separation of ~5 μHz. They suggested that the most plausible explanation for the variability of Arcturus is stellar oscillations.

It is believed that the surface of the star oscillates slightly, a common feature of red giant stars. In the case of Arcturus, this was an interesting discovery as it is known that the redder (more towards or within the M spectral class) a giant gets, the more variable it will be. Extreme cases like Mira undergo large swings over hundreds of days; Arcturus is not very red and is a borderline case between variability and stability with its short period and tiny range.{{ safesubst:#invoke:Unsubst||date=__DATE__ |$B= {{#invoke:Category handler|main}}{{#invoke:Category handler|main}}[citation needed] }}

Astronomers term "metals" those elements with higher atomic numbers than helium. Arcturus has a much lower metallicity than our sun, and it is possibly a Population II star.[8]

Arcturus is notable for its high proper motion, larger than any first magnitude star in the stellar neighborhood other than α Centauri. It is moving rapidly (122 km/s) relative to the solar system, and is now almost at its closest point to the Sun. Closest approach will happen in about 4,000 years, when the star will be a few hundredths of a light year closer to Earth than it is today. Arcturus is thought to be an old disk star, and appears to be moving with a group of 52 other such stars, known as the Arcturus stream.[15] Its mass is hard to exactly determine, but may be slightly larger than that of the Sun[16] (1.1Template:± solar mass). Arcturus is around 7.1 billion (up to 8.5 billion) years old,[17] and has likely begun fusing helium into oxygen and carbon in its core. It will expand further after its helium supply is exhausted, slough off its outer shell and become a white dwarf inside a planetary nebula.[9]

In antiquity, Arcturus was closer to the centre of the constellation.[6]

Hipparcos also suggested that Arcturus is a binary star, with the companion about twenty times dimmer than the primary and orbiting close enough to be at the very limits of our current ability to make it out. Recent results remain inconclusive, but do support the marginal Hipparcos detection of a binary companion.[18]

In 1993, radial velocity measurements of Aldebaran, Arcturus and Pollux showed that Arcturus exhibited a long-period radial velocity oscillation, which could be interpreted as a substellar companion. This substellar object would be nearly 12 times the mass of Jupiter and be located roughly within Earth's orbital zone, at 1.1 Astronomical Units. However, all three stars surveyed showed similar oscillations yielding similar companion masses, and the authors concluded that the variation was likely to be intrinsic to the star rather than due to the gravitational effect of a companion. So far no substellar companion has been confirmed.[19] 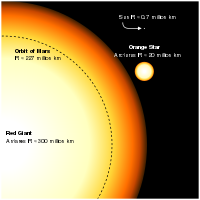 Comparison between Arcturus, red supergiant Antares, and the Sun. The black circle is the size of the orbit of Mars.

The name of the star derives from Ancient Greek Αρκτοῦρος (Arktouros) and means "Guardian of the Bear",[20] ultimately from ἄρκτος (arktos), "bear"[21] + οὖρος (ouros), "watcher, guardian".[22] It has been known by this name since at least the time of Hesiod.[6] This is a reference to it being the brightest star in the constellation Boötes (of which it forms the left foot), which is next to the Greater and Lesser Bears, Ursa Major and Ursa Minor.

In Ancient Rome, the star's celestial activity was supposed to portend tempestuous weather and a personification of the star acts as narrator of the prologue to Plautus' comedy Rudens.[23]

In Arabic, Arcturus is one of two stars called al-simāk ("the uplifted one"), the other being Spica. Arcturus is specified as السماك الرامح as-simāk ar-rāmiħ "the uplifted one of the lancer". The term Al Simak Al Ramih was appeared in Al Achsasi Al Mouakket catalogue, which was translated into Latin as Al Simak Lanceator.[24] This has been variously romanized in the past, leading to obsolete variants such as Aramec and Azimech. The name Alramih is used in Geoffrey Chaucer's Treatise on the Astrolabe of 1391. Another Arabic name is Haris-el-sema, from حارس السماء ħāris al-samā’ "the keeper of heaven".[25][26][27] or حارس ألشمل ħāris al-shamāl’ "the keeper of north".[28]

In the Hebrew scriptures Arcturus is referred to in Job 38:32

Arcturus was once again called by its classical name from the Renaissance onwards.[29]

The Wotjobaluk Koori people of southeastern Australia knew Arcturus as Marpean-kurrk, mother of Djuit (Antares) and another star in Bootes, Weet-kurrk,[30] (Muphrid).[31] Its appearance in the north signified the arrival of the larvae of the wood ant (a food item) in spring. The beginning of summer was marked by the star's setting with the sun in the west and the disappearance of the larvae.[30] The people of Milingimbi Island in Arnhem Land saw Arcturus and Muphrid as man and woman, and took the appearance of Arcturus at sunrise as a sign to go and harvest rakia or spikerush.[32] The Wailwun of northern New South Wales knew Arcturus as Guembila "red".[32]

In Inuit astronomy, Arcturus is called the Old Man (Uttuqalualuk in Inuit) and The First Ones (Sivulliik in Inuit).

In Indian Astrology or Vedic Astrology or Sidereal Astrology, Arcturus is called 'Svati' which is a word meaning "very beneficent" derived from the language Sanskrit. It is the eponymous star of one of the nakshatras (lunar mansions) of Hindu astrology.

In Indonesia, Arcturus is called Bintang Biduk (Star of boat).