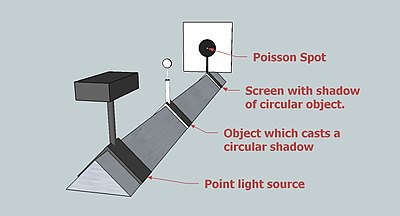 Arago spot experiment. A point source illuminates a circular object, casting a shadow on a screen. At the shadow's center a bright spot appears due to diffraction, contradicting the prediction of geometric optics.

In optics, an Arago spot, Fresnel bright spot, or Poisson spot is a bright point that appears at the center of a circular object's shadow due to Fresnel diffraction.[1][2][3][4] This spot played an important role in the discovery of the wave nature of light and is a common way to demonstrate that light behaves as a wave (for example, in undergraduate physics laboratory exercises).

The basic experimental setup requires a "point source," such as an illuminated pinhole, or a diverging laser beam. The dimensions of the setup must comply with the requirements for Fresnel diffraction. Namely, the Fresnel number must satisfy

Finally, the edge of the circular object must be sufficiently smooth.

These conditions together explain why the bright spot is not encountered in everyday life. However, with the laser sources available today, it is undemanding to perform an Arago spot experiment.[5]

In astronomy, the Arago spot can also be observed in the strongly defocussed image of a star in a Newtonian telescope. There, the star provides an almost ideal point source at infinity, and the secondary mirror of the telescope constitutes the circular obstacle.

When light shines on the circular obstacle, Huygens' principle says that every point in the plane of the obstacle acts as a new point source of light. The light coming from points on the circumference of the obstacle, and going to the center of the shadow, travels exactly the same distance; so all the light passing close by the object arrives at the screen in phase and constructively interferes. This results in a bright spot at the shadow's center, where geometrical optics and particle theories of light predict that there should be no light at all.

At the beginning of the 19th century, the idea that light does not simply propagate along straight lines gained traction. Thomas Young published his double-slit experiment in 1807.[6] The original Arago spot experiment was carried out a decade later, and was the deciding experiment on the question of whether light is a particle or a wave. It is thus an example of an experimentum crucis.

At that time, many favored Isaac Newton's corpuscular theory of light, among them the theoretician Siméon Denis Poisson.[7] In 1818 the French Academy of Sciences launched a competition to explain the properties of light, where Poisson was one of the members of the judging committee. The civil engineer Augustin-Jean Fresnel entered this competition by submitting a new wave theory of light.[8]

Poisson studied Fresnel's theory in detail, and, being a supporter of the particle-theory of light, looked for a way to prove it wrong. Poisson thought he had found a flaw when he argued that a consequence of Fresnel's theory was that there would exist an on-axis bright spot in the shadow of a circular obstacle, where there should be complete darkness according to the particle-theory of light. Since the Arago spot is not easily observed in every-day situations, Poisson interpreted it as an absurd result and that it should disprove Fresnel's theory.

However, the head of the committee, Dominique-François-Jean Arago—who incidentally later became Prime Minister of France—decided to perform the experiment in more detail. He molded a 2 mm metallic disk to a glass plate with wax.[9] He succeeded in observing the predicted spot, which convinced most scientists of the wave-nature of light, and gave Fresnel the win.

Arago later noted that the phenomenon (which was later to be known as Poisson's Spot or the Spot of Arago) had already been observed by Delisle[10] and Maraldi[11] a century earlier. It only turned out much later (in one of Einstein's Annus Mirabilis papers) that light can be equally described as a particle (wave–particle duality of light).

File:Huygensfresnelintegral.jpg
Notation for calculating the wave amplitude at point P1 from a spherical point source at P0.

At the heart of Fresnel's wave theory is the Huygens–Fresnel principle, which states that every unobstructed point of a wavefront becomes the source of a secondary spherical wavelet and that the amplitude of the optical field E at a point on the screen is given by the superposition of all those secondary wavelets taking into account their relative phases.[12] This means that the field at a point P1 on the screen is given by a surface integral:

where the inclination factor

A is the amplitude of the source wave

is the wavenumber
S is the unobstructed surface.

File:Poissonspotintensity.jpg
The on-axis intensity at the center of the shadow of a small circular obstacle converges to the unobstructed intensity.

This integral can be solved numerically (see below). If g is large and b is small so that the angle

is not negligible one can write the integral for the on-axis case (P1 is at the center of the shadow) as (see [14]):

The source intensity, which is the square of the field amplitude, is

and the intensity at the screen

. The on-axis intensity as a function of the distance b is hence given by:

This shows that the on-axis intensity at the center of the shadow tends to the source intensity, as if the circular object was not present at all. Furthermore, this means that the Arago spot is present even just a few obstacle diameters behind the disc.

To calculate the full diffraction image that is visible on the screen one has to consider the surface integral of the previous section. One cannot exploit circular symmetry anymore, since the line between the source and an arbitrary point on the screen does not pass through the center of the circular object. With the aperture function

which is 1 for transparent parts of the object plane and 0 otherwise (i.e. It is 0 if the direct line between source and the point on the screen passes through the blocking circular object.) the integral that needs to be solved is given by:

Numerical calculation of the integral using the trapezoidal rule or Simpson's rule is not efficient and becomes numerically unstable especially for configurations with large Fresnel number. However, it is possible to solve the radial part of the integral so that only the integration over the azimuth angle remains to be done numerically.[15] For a particular angle one must solve the line integral for the ray with origin at the intersection point of the line P0P1 with the circular object plane. The contribution for a particular ray with azimuth angle

and passing a transparent part of the object plane from

for a certain number of angles between 0 and

. Results of such a calculation are shown in the following images. 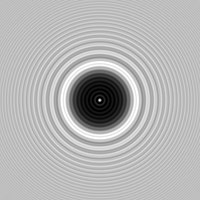 The lateral intensity distribution on the screen has in fact the shape of a squared zeroth Bessel function of the first kind when close to the optical axis and using a plane wave source (point source at infinity):[16]

r is the distance of the point

is the wavelength
b is the distance between circular object and screen.

The following images show the radial intensity distribution of the simulated Arago spot images above: 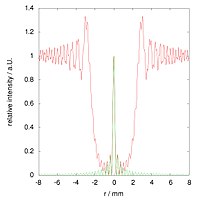 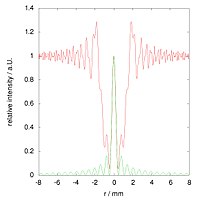 The red lines in these three graphs correspond to the simulated images above, and the green lines were computed by applying the corresponding parameters to the squared Bessel function given above.

If the cross-section of the circular object deviates slightly from its circular shape (but it still has a sharp edge on a smaller scale) the shape of the point-source Arago spot changes. In particular, if the object has an ellipsoidal cross-section the Arago spot has the shape of an evolute.[17] Note that this is only the case if the source is close to an ideal point source. From an extended source the Arago spot is only affected marginally, since one can interpret the Arago spot as a point-spread function. Therefore, the image of the extended source only becomes washed out due to the convolution with the point-spread function, but it does not decrease in over all intensity.

The Arago spot is very sensitive to small-scale deviations from the ideal circular cross-section. This means that a small amount of surface roughness of the circular object can completely cancel out the bright spot. This is shown in the following three diagrams which are simulations of the Arago spot from a 4 mm diameter disc (g = b = 1 m): 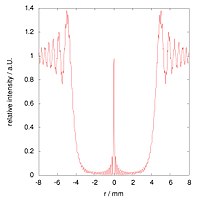 This effect can be best understood using the Fresnel zone concept. The circular object blocks a certain number of Fresnel zones. The Fresnel zone that begins with the edge of the circular object is the only one that contributes to the Arago spot. All the Fresnel zones that are further out destructively interfere with each other and thus cancel. Random edge corrugation whose amplitude is of the same order as the width of that adjacent Fresnel zone reduces the Arago spot intensity. Contributions from the parts of the edge whose radius has been increased by the corrugation to about the width of the adjacent Fresnel zone now destructively interfere with those contributions from the parts which have not been affected by the corrugation.

The adjacent Fresnel zone is approximately given by:[18]

The edge corrugation should not be much more than 10% of this width to see a close to ideal Arago spot. In the above simulations with the 4 mm diameter disc the adjacent Fresnel zone has a width of about 77 µm.

Recently, the Arago spot experiment was demonstrated with a supersonic expansion beam of deuterium molecules (an example of neutral matter waves).[18] Material particles behaving like waves is known from quantum mechanics. The wave-nature of particles actually dates back to de Broglie's hypothesis[19] as well as Davisson and Germer's experiments.[20] An Arago spot of electrons, which also constitute matter waves, can be observed in transmission electron microscopes when examining circular structures of a certain size.

The observation of an Arago spot with large molecules, thus proving their wave-nature, is a topic of current research.[18]

Beside the demonstration of wave-behavior the Arago spot also has a few other applications. One of the ideas is to use the Arago spot as a straight line reference in alignment systems (see Feier et al.). Another is to probe aberrations in laser beams by using the spot's sensitivity to beam aberrations.[16]