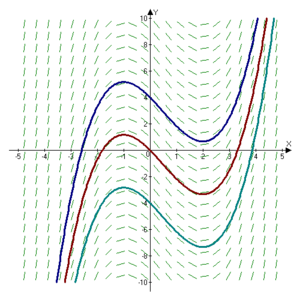 The slope field of F(x) = (x3/3)-(x2/2)-x+c, showing three of the infinitely many solutions that can be produced by varying the arbitrary constant C.

The discrete equivalent of the notion of antiderivative is antidifference.

Antiderivatives are important because they can be used to compute definite integrals, using the fundamental theorem of calculus: if F is an antiderivative of the integrable function f and f is continuous over the interval [a, b], then:

Because of this, each of the infinitely many antiderivatives of a given function f is sometimes called the "general integral" or "indefinite integral" of f and is written using the integral symbol with no bounds:

If F is an antiderivative of f, and the function f is defined on some interval, then every other antiderivative G of f differs from F by a constant: there exists a number C such that G(x) = F(x) + C for all x. C is called the arbitrary constant of integration. If the domain of F is a disjoint union of two or more intervals, then a different constant of integration may be chosen for each of the intervals. For instance

is the most general antiderivative of

on its natural domain

Every continuous function f has an antiderivative, and one antiderivative F is given by the definite integral of f with variable upper boundary:

Varying the lower boundary produces other antiderivatives (but not necessarily all possible antiderivatives). This is another formulation of the fundamental theorem of calculus.

There are various methods available:

Non-continuous functions can have antiderivatives. While there are still open questions in this area, it is known that:

Assuming that the domains of the functions are open intervals:

on the closed interval [a, b]. Then g must have either a maximum or minimum c in the open interval (a, b) and so

However if f is unbounded, or if f is bounded but the set of discontinuities of f has positive Lebesgue measure, a different choice of sample points

may give a significantly different value for the Riemann sum, no matter how fine the partition. See Example 4 below.