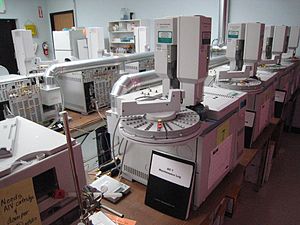 Analytical chemistry is the study of the separation, identification, and quantification of the chemical components of natural and artificial materials.[1] Qualitative analysis gives an indication of the identity of the chemical species in the sample, and quantitative analysis determines the amount of certain components in the substance. The separation of components is often performed prior to analysis.

Analytical methods can be separated into classical and instrumental.[2] Classical methods (also known as wet chemistry methods) use separations such as precipitation, extraction, and distillation and qualitative analysis by color, odor, or melting point. Classical quantitative analysis is achieved by measurement of weight or volume. Instrumental methods use an apparatus to measure physical quantities of the analyte such as light absorption, fluorescence, or conductivity. The separation of materials is accomplished using chromatography, electrophoresis or field flow fractionation methods. 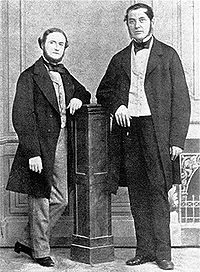 Analytical chemistry has been important since the early days of chemistry, providing methods for determining which elements and chemicals are present in the object in question. During this period significant analytical contributions to chemistry include the development of systematic elemental analysis by Justus von Liebig and systematized organic analysis based on the specific reactions of functional groups.

The first instrumental analysis was flame emissive spectrometry developed by Robert Bunsen and Gustav Kirchhoff who discovered rubidium (Rb) and caesium (Cs) in 1860.[3]

Most of the major developments in analytical chemistry take place after 1900. During this period instrumental analysis becomes progressively dominant in the field. In particular many of the basic spectroscopic and spectrometric techniques were discovered in the early 20th century and refined in the late 20th century.[4]

The separation sciences follow a similar time line of development and also become increasingly transformed into high performance instruments.[5] In the 1970s many of these techniques began to be used together to achieve a complete characterization of samples.

Starting in approximately the 1970s into the present day analytical chemistry has progressively become more inclusive of biological questions (bioanalytical chemistry), whereas it had previously been largely focused on inorganic or small organic molecules. Lasers have been increasingly used in chemistry as probes and even to start and influence a wide variety of reactions. The late 20th century also saw an expansion of the application of analytical chemistry from somewhat academic chemical questions to forensic, environmental, industrial and medical questions, such as in histology.[6]

Modern analytical chemistry is dominated by instrumental analysis. Many analytical chemists focus on a single type of instrument. Academics tend to either focus on new applications and discoveries or on new methods of analysis. The discovery of a chemical present in blood that increases the risk of cancer would be a discovery that an analytical chemist might be involved in. An effort to develop a new method might involve the use of a tunable laser to increase the specificity and sensitivity of a spectrometric method. Many methods, once developed, are kept purposely static so that data can be compared over long periods of time. This is particularly true in industrial quality assurance (QA), forensic and environmental applications. Analytical chemistry plays an increasingly important role in the pharmaceutical industry where, aside from QA, it is used in discovery of new drug candidates and in clinical applications where understanding the interactions between the drug and the patient are critical. 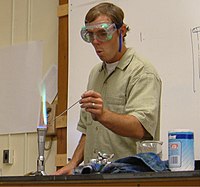 The presence of copper in this qualitative analysis is indicated by the bluish-green color of the flame.

Template:Rellink There are numerous qualitative chemical tests, for example, the acid test for gold and the Kastle-Meyer test for the presence of blood.

Template:Rellink Inorganic qualitative analysis generally refers to a systematic scheme to confirm the presence of certain, usually aqueous, ions or elements by performing a series of reactions that eliminate ranges of possibilities and then confirms suspected ions with a confirming test. Sometimes small carbon containing ions are included in such schemes. With modern instrumentation these tests are rarely used but can be useful for educational purposes and in field work or other situations where access to state-of-the-art instruments are not available or expedient.

Template:Rellink Gravimetric analysis involves determining the amount of material present by weighing the sample before and/or after some transformation. A common example used in undergraduate education is the determination of the amount of water in a hydrate by heating the sample to remove the water such that the difference in weight is due to the loss of water.

Template:Rellink Titration involves the addition of a reactant to a solution being analyzed until some equivalence point is reached. Often the amount of material in the solution being analyzed may be determined. Most familiar to those who have taken chemistry during secondary education is the acid-base titration involving a color changing indicator. There are many other types of titrations, for example potentiometric titrations. These titrations may use different types of indicators to reach some equivalence point. 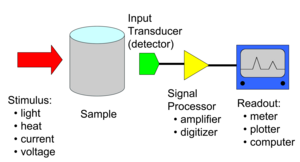 An accelerator mass spectrometer used for radiocarbon dating and other analysis.

Template:Rellink Electroanalytical methods measure the potential (volts) and/or current (amps) in an electrochemical cell containing the analyte.[7][8] These methods can be categorized according to which aspects of the cell are controlled and which are measured. The three main categories are potentiometry (the difference in electrode potentials is measured), coulometry (the cell's current is measured over time), and voltammetry (the cell's current is measured while actively altering the cell's potential).

Template:Further2 Calorimetry and thermogravimetric analysis measure the interaction of a material and heat. 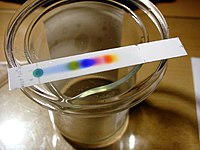 Separation of black ink on a thin layer chromatography plate.

Template:Further2 Separation processes are used to decrease the complexity of material mixtures. Chromatography, electrophoresis and Field Flow Fractionation are representative of this field.

Hyphenated separation techniques refers to a combination of two (or more) techniques to detect and separate chemicals from solutions. Most often the other technique is some form of chromatography. Hyphenated techniques are widely used in chemistry and biochemistry. A slash is sometimes used instead of hyphen, especially if the name of one of the methods contains a hyphen itself. 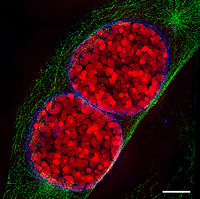 Template:Rellink The visualization of single molecules, single cells, biological tissues and nanomaterials is an important and attractive approach in analytical science. Also, hybridization with other traditional analytical tools is revolutionizing analytical science. Microscopy can be categorized into three different fields: optical microscopy, electron microscopy, and scanning probe microscopy. Recently, this field is rapidly progressing because of the rapid development of the computer and camera industries.

Template:Further2 Devices that integrate (multiple) laboratory functions on a single chip of only millimeters to a few square centimeters in size and that are capable of handling extremely small fluid volumes down to less than picoliters.

{{#invoke:main|main}} Error can be defined as numerical difference between observed value and true value. [15]

Error of a measurement is an inverse measure of accurate measurement i.e smaller the error greater the accuracy of the measurement. Errors are expressed relatively as:

A general method for analysis of concentration involves the creation of a calibration curve. This allows for determination of the amount of a chemical in a material by comparing the results of unknown sample to those of a series of known standards. If the concentration of element or compound in a sample is too high for the detection range of the technique, it can simply be diluted in a pure solvent. If the amount in the sample is below an instrument's range of measurement, the method of addition can be used. In this method a known quantity of the element or compound under study is added, and the difference between the concentration added, and the concentration observed is the amount actually in the sample.

The method of standard addition is used in instrumental analysis to determine concentration of a substance (analyte) in an unknown sample by comparison to a set of samples of known concentration, similar to using a calibration curve. Standard addition can be applied to most analytical techniques and is used instead of a calibration curve to solve the matrix effect problem.

One of the most important components of analytical chemistry is maximizing the desired signal while minimizing the associated noise.[16] The analytical figure of merit is known as the signal-to-noise ratio (S/N or SNR).

Noise can arise from environmental factors as well as from fundamental physical processes.

{{#invoke:main|main}} Thermal noise results from the motion of charge carriers (usually electrons) in an electrical circuit generated by their thermal motion. Thermal noise is white noise meaning that the power spectral density is constant throughout the frequency spectrum.

where kB is Boltzmann's constant, T is the temperature, R is the resistance, and

is the bandwidth of the frequency

{{#invoke:main|main}} Shot noise is a type of electronic noise that occurs when the finite number of particles (such as electrons in an electronic circuit or photons in an optical device) is small enough to give rise to statistical fluctuations in a signal.

Shot noise is a Poisson process and the charge carriers that make up the current follow a Poisson distribution. The root mean square current fluctuation is given by[16]

where e is the elementary charge and I is the average current. Shot noise is white noise.

{{#invoke:main|main}} Flicker noise is electronic noise with a 1/ƒ frequency spectrum; as f increases, the noise decreases. Flicker noise arises from a variety of sources, such as impurities in a conductive channel, generation and recombination noise in a transistor due to base current, and so on. This noise can be avoided by modulation of the signal at a higher frequency, for example through the use of a lock-in amplifier.

Noise in a thermogravimetric analysis; lower noise in the middle of the plot results from less human activity (and environmental noise) at night.

Environmental noise arises from the surroundings of the analytical instrument. Sources of electromagnetic noise are power lines, radio and television stations, wireless devices, Compact fluorescent lamps[17] and electric motors. Many of these noise sources are narrow bandwidth and therefore can be avoided. Temperature and vibration isolation may be required for some instruments.

Analytical chemistry research is largely driven by performance (sensitivity, selectivity, robustness, linear range, accuracy, precision, and speed), and cost (purchase, operation, training, time, and space). Among the main branches of contemporary analytical atomic spectrometry, the most widespread and universal are optical and mass spectrometry.[18] In the direct elemental analysis of solid samples, the new leaders are laser-induced breakdown and laser ablation mass spectrometry, and the related techniques with transfer of the laser ablation products into inductively coupled plasma. Advances in design of diode lasers and optical parametric oscillators promote developments in fluorescence and ionization spectrometry and also in absorption techniques where uses of optical cavities for increased effective absorption pathlength are expected to expand. The use of plasma- and laser-based methods is increasing. An interest towards absolute (standardless) analysis has revived, particularly in emission spectrometry.{{ safesubst:#invoke:Unsubst||date=__DATE__ |$B= {{#invoke:Category handler|main}}{{#invoke:Category handler|main}}[citation needed] }}

great effort is put in shrinking the analysis techniques to chip size. Although there are few examples of such systems competitive with traditional analysis techniques, potential advantages include size/portability, speed, and cost. (micro Total Analysis System (µTAS) or Lab-on-a-chip). Microscale chemistry reduces the amounts of chemicals used.

Many developments improve the analysis of biological systems. Examples of rapidly expanding fields in this area are:

The recent developments of computer automation and information technologies have extended analytical chemistry into a number of new biological fields. For example, automated DNA sequencing machines were the basis to complete human genome projects leading to the birth of genomics. Protein identification and peptide sequencing by mass spectrometry opened a new field of proteomics.

Analytical chemistry has been an indispensable area in the development of nanotechnology. Surface characterization instruments, electron microscopes and scanning probe microscopes enables scientists to visualize atomic structures with chemical characterizations.