Template:Infobox computer The Amiga 500 - also known as the A500 (or its code name "Rock Lobster") - was the first “low-end” Commodore Amiga 16/32-bit multimedia home/personal computer. It was announced at the winter Consumer Electronics Show in January 1987 - at the same time as the high-end Amiga 2000 - and competed directly against the Atari 520ST. Before Amiga 500 was shipped, Commodore suggested that the list price of the Amiga 500 was $595.95 USD without a monitor. At delivery in October 1987, Commodore announced that the Amiga 500 would carry a $699 USD/£499 GBP list price.

The Amiga 500 represented a return to Commodore's roots by being sold in the same mass retail outlets as the Commodore 64 - to which it was a spiritual successor - as opposed to the computer-store-only Amiga 1000.

The original Amiga 500 proved to be Commodore’s best-selling Amiga model, enjoying particular success in Europe.[1] Although popular with hobbyists, arguably its most widespread use was as a gaming machine, where its advanced graphics and sound for the time were of significant benefit.

In late 1991, an enhanced model known as the Amiga 500+ replaced the standard Amiga 500 in some markets, it was bundled with the Cartoon Classics pack in the United Kingdom at 399 GBP.[3]

The Amiga 500 series was discontinued in mid-1992 replaced by the similarly specified and priced Amiga 600, although this new machine had originally been intended as a much cheaper budget model, which would have been the A300. In late 1992, Commodore released the “next-generation” Amiga 1200, a machine closer in concept to the original Amiga 500, but featuring significant technical improvements. Despite this, neither the A1200 nor the A600 replicated the commercial success of its predecessor as, by this time, the market was definitively shifting from the home computer platforms of the past to commodity Wintel PCs and the new "low-cost" Macintosh Classic, LC and IIsi models.[4]

The earliest Amiga 500 models used nearly the same OCS chipset as the Amiga 1000,[6] so graphics can be displayed in multiple resolutions and color depths, even on the same screen. Resolutions vary from 320x200 (up to 32 colors) to 640x200 (up to 16 colors) for NTSC (704x484 overscan) and 320x256 to 640x256 for PAL (704x576 overscan.)[7] The system uses planar graphics, with up to five bitplanes (four in hires) allowing 2, 4, 8, 16, and 32-color screens, from a palette of 4096 colors. Two special graphics modes are also available: Extra HalfBrite, which uses a 6th bitplane as a mask to cut the brightness of any pixel in half (resulting in 32 arbitrary colors plus 32 more colors set at half the value of the first 32), and Hold And Modify (HAM) which allows all 4096 colors to be used on screen simultaneously (though only one color component – red, green, or blue – can be changed in the next pixel in this mode.)[8] Later revisions of the chipset are PAL/NTSC switchable in software.

The sound chip produces four hardware-mixed channels, two to the left and two to the right, of 8-bit PCM at a sampling frequency of up to 28 kHz. Each hardware channel has its own independent volume level and sampling rate, and can be designated to another channel where it can modulate both volume and frequency using its own output. With DMA disabled it's possible to output with a sampling frequency up to 56 kHz. There's a widely known trick to output sound with 14-bit precision too that can be combined to output 14-bit 56 kHz sound.

The stock system comes with AmigaOS version 1.2 or 1.3 and 512 kB of Chip RAM (150 ns access time), one built-in double-density floppy disk drive that is completely programmable and can read 720 kB IBM PC disks, 880 kB standard Amiga disks, and up to 984 kB using custom formatting drivers. The Amiga 500 houses the keyboard and CPU in one shell, similar to the design of the Commodore 64 and unlike the Amiga 1000.

Despite the lack of Amiga 2000-compatible internal expansion slots, there are many ports and expansion options. There are two Atari 2600 DE9M sockets for joysticks or mice, stereo audio (RCA connectors 1 V p-p). There is a floppy drive port for daisy-chaining up to 3 extra floppy disk drives via an DB23F connector.[9] The then-standard RS-232 serial port (DB25M) and Centronics parallel port (DB25F) are also included. The power supply is (+5V, +/-12V).[10] The system displays video in analog RGB 50 Hz PAL or 60 Hz NTSC through a proprietary DB23M connector and in NTSC mode the line frequency is 15,750 Hz HSync for standard video modes which is compatible with NTSC television and CVBS/RGB video, but out of range for most VGA-compatible monitors. While a Multisync monitor is required for some of the higher resolutions. This connection can also be genlocked to an external video signal. The system was bundled with an RF adapter to provide output on televisions with a coaxial input, while monochrome composite video is available via an RCA connector. There is also a Zorro II bus expansion on the left side (behind a plastic cover). Peripherals such as a hard drive can be added via the expansion slot and are configured automatically by the Amiga's AutoConfig standard, so that multiple devices do not conflict with each other. Up to 8 MB of “fast" RAM can be added using the side expansion slot.

The Amiga 500 has a "trapdoor" slot on the underside for an upgrade of 512 kB of RAM. The extra RAM is classified as "fast" RAM, but is sometimes referred to as "slow" RAM since due to the design of the expansion bus it is actually on the chipset bus. Such upgrades usually include a battery-backed real-time clock. All versions of the A500 can have the additional RAM configured as Chip RAM by a simple hardware modification, which involves fitting a later model (8372A) Agnus chip. Likewise, all versions of the A500 can be upgraded to 2 MB Chip RAM by fitting the 8372B Agnus chip and adding additional memory.

The Amiga 500 also sports an unusual feature for a budget machine, socketed chips, which allow easy replacement of defective chips. The CPU can be directly upgraded to a 68010 or to a 68020, 68030, or 68040 via the side expansion slot. In fact, all the custom chips can be upgraded to the Amiga Enhanced Chip Set (ECS) versions.

The case is made from ABS plastics which may become brown with time. This can be reversed by using the public domain chemical mix "Retr0bright".

Max 6 bpp. The Amiga could show multiple resolution modes at the same time, splitting the screen vertically. An additional mode called Hold-And-Modify (HAM) makes it possible to utilize 12 bpp over a 3 pixels wide span. This works by letting each pixel position use the previous RGB value and modify one of the red, green or blue values to a new 4-bit value. This will cause some negligible colour artifacts however.

The Amiga 520 adapter allowed for an RF modulated output, to be connected to a TV 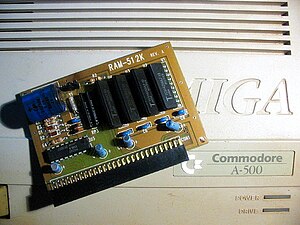 An A501 compatible expansion

A popular expansion for the Amiga 500 was the Amiga 501 circuit board that could be installed underneath the computer behind a plastic cover. It contains 512 kB RAM configured by default as “Slow RAM” or “Trapdoor RAM” and a battery-backed real-time clock (RTC). However the RAM was pseudo Fast RAM, only accessible by the processor but still as slow as Chip RAM. The motherboard can be modified to relocate the trapdoor RAM to the Chip memory pool, provided a compatible Agnus chip is fitted on the motherboard.