The Commodore Amiga 1000, also known as the A1000 and originally simply as the Amiga, was the first personal computer release by Commodore International in the Amiga line. It used one of the most powerful and orthogonal CPUs for its time and also one of the most advanced graphics and sound hardware of its class with a preemptive multitasking operating system that fit into 512 KB of memory.[1]

The A1000 has a number of characteristics that distinguish it from later Amiga models: It is the only model to feature the short-lived Amiga "check mark" logo on its case, the case is elevated slightly to give a storage area for the keyboard when not in use (a "keyboard garage"), and the inside of the case is engraved with the signatures of the Amiga designers (similar to the Macintosh); including Jay Miner and the paw print of his dog Mitchy. The A1000's case was designed by Howard Stolz.[2] As Senior Industrial Designer at Commodore, Stolz was the mechanical lead and primary interface with Sanyo in Japan, the contract manufacturer for the A1000 casing.[3]

Because AmigaOS was rather buggy at the time of the A1000's release, the OS was not placed in ROM. Instead, the A1000 included a daughterboard with 256 KB of RAM, dubbed the "Writable Control Store" (WCS), into which the core of the operating system was loaded from floppy disk (this portion of the operating system was known as the "Kickstart"). The WCS was write-protected after loading, and system resets did not require a reload of the WCS. In Europe, the WCS was often referred to as WOM (Write Once Memory), a play on the more conventional term "ROM" (Read Only Memory).

The Amiga 1000 has a Motorola 68000 CPU running at 7.15909 MHz (on NTSC systems) or 7.09379 MHz (PAL systems), precisely double the video color carrier frequency for NTSC or 1.6 times the color carrier frequency for PAL. The system clock timings are derived from the video frequency, which simplifies glue logic and allows the Amiga 1000 to make do with a single crystal. The chipset was designed to synchronize CPU memory access and chipset DMA so the hardware runs in real-time without wait-state delays.

The original 68000 CPU can be directly replaced with a 68010, which can execute instructions slightly faster than the 68000 but also introduces a small degree of software incompatibility. Third-party CPU upgrades, which mostly fit in the CPU socket, use faster 68020/68881 or 68030/68882 microprocessors and integrated memory. Such upgrades often have the option to revert to 68000 mode for full compatibility. Some boards have a socket to seat the original 68000, whereas the 68030 cards typically come with an on-board 68000.

The original Amiga 1000 is the only model to have 256 KB of Amiga Chip RAM, which can be expanded to 512 KB with the addition of a daughterboard under a cover in the centre front of the machine.[4]Template:Inconsistent citations RAM may also be upgraded via official and third-party upgrades, with a practical upper limit of about 9 MB of "fast" RAM due to the 68000's 24-bit address bus. This memory is accessible only by the CPU permitting faster code execution as DMA cycles are not shared with the chipset.

The Amiga 1000 features an 86-pin expansion port (electrically identical to the later Amiga 500 expansion port, though the A500's connector is inverted). This port was utilized by third-party expansions such as memory upgrades and SCSI adaptors. These resources are handled by the Amiga AutoConfig standard. Other expansion options were available including a bus expander which provided two Zorro-II slots. 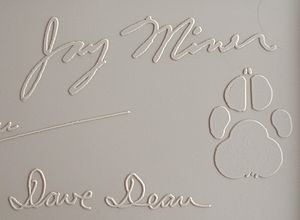 Jay Miner's signature from the top cover of a Commodore Amiga 1000 computer. The paw print is that of Mitchy, Miner's dog

Introduced on July 23, 1985 at the Lincoln Center in New York City, machines began shipping in September with a base configuration of 256 KB of RAM at the retail price of US$1,295. A Template:Convert analog RGB monitor was available for around US$300, bringing the price of a complete Amiga system to 1,595 USD. Before the release of the Amiga 500 and Amiga 2000 models in 1987, the A1000 was simply called Amiga.

In the US, the A1000 was marketed as The Amiga from Commodore, though the Commodore logo was omitted from the case. Additionally, the Amiga 1000 was sold exclusively in computer stores rather than the various non computer-dedicated department and toy stores through which the VIC20 and Commodore 64 were retailed. These measures were an effort to avoid Commodore's "toy-store" computer image created during the Tramiel era.[5][6]

Along with the operating system, the machine came bundled with a version of AmigaBASIC developed by Microsoft and a speech synthesis library developed by Softvoice, Inc.

Many A1000 owners remained attached to their machines long after newer models rendered the units technically obsolete, and it attracted numerous aftermarket upgrades. Many CPU upgrades that plugged into the Motorola 68000 socket functioned in the A1000. Additionally, a line of products called the Rejuvenator series allowed the use of newer chipsets in the A1000, and an Australian-designed replacement A1000 motherboard called The Phoenix utilized the same chipset as the A3000 and added an A2000-compatible video slot and onboard SCSI controller.

In 1994, as Commodore filed for bankruptcy, Byte magazine called the Amiga 1000 "the first multimedia computer... so far ahead of its time that almost nobody—including Commodore's marketing department—could fully articulate what it was all about".[7]