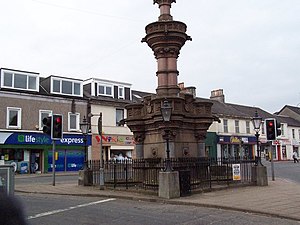 As of 2001, the population of the town is 13,444. It is the largest town in the Vale of Leven, the others being Balloch, Bonhill, Jamestown and Renton; their combined population is over 20,000.

The town's traditional industries, most importantly cotton manufacturing, bleaching and printing, have been phased out. The town was redeveloped in the 1970s with a new town centre layout and traffic system. Local landmarks include Christie Park, and the Fountain in the town centre. Lomond Galleries on North Main Street is a former car factory with an impressive dome and an even more impressive marble entrance hall and staircase. It was originally built in 1906 as the Argyll Motor Works, for Argyll Motors Ltd. A carving above the entrance shows one of the company's cars. After the car production ceased in 1914 it was used by the Admiralty for the manufacture of torpedoes, which were test-fired in Loch Long, and in the early 1970s was the scene of the Plessey sit-in.[2] The town had the curious distinction of having the only unemployment benefit office in Britain with the insignia of King Edward VIII of the United Kingdom above the door, until the building was closed and redeveloped as housing, but the insignia was retained. It is also reputed to be the only UK town with a railway station and a pub in the middle of a roundabout. A. J. Cronin's uncle owned a pub in Bridge Street. Alexandria Library is located on Gilmour Street.[3]

Alexandria sits on the former A82 main road between Glasgow and Loch Lomond. There are regular bus services on the route and the town has a railway station on the rail line between Balloch and Glasgow Queen Street.