Albinism (from Latin albus, "white"; see extended etymology, also called achromia, achromasia, or achromatosis) is a congenital disorder characterized by the complete or partial absence of pigment in the skin, hair and eyes due to absence or defect of tyrosinase, a copper-containing enzyme involved in the production of melanin. Albinism results from inheritance of recessive gene alleles and is known to affect all vertebrates, including humans. While an organism with complete absence of melanin is called an albino (Template:IPAc-en,[1] or Template:IPAc-en)[2] an organism with only a diminished amount of melanin is described as albinoid.[3]

Albinism is associated with a number of vision defects, such as photophobia, nystagmus and astigmatism. Lack of skin pigmentation makes for more susceptibility to sunburn and skin cancers. In rare cases such as Chédiak–Higashi syndrome, albinism may be associated with deficiencies in the transportation of melanin granules. This also affects essential granules present in immune cells leading to increased susceptibility to infection.[4] 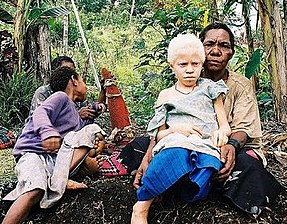 Most people with oculocutaenous albinism appear white or very pale as the melanin pigments responsible for brown, black, and some yellow colorations are not present. Ocular albinism results in pale blue eyes, and may require genetic testing to diagnose.

Because individuals with albinism have skin that entirely lacks the dark pigment melanin, which helps protect the skin from the sun's ultraviolet radiation, their skin can burn more easily from overexposure.[5]

The human eye normally produces enough pigment to color the iris blue, green or brown and lend opacity to the eye. However, there are cases in which the eyes of an albinistic person appear red, pink or purple, depending on the amount of pigment present, due to the red of retina being visible through the iris. Lack of pigment in the eyes also results in problems with vision, both related and unrelated to photosensitivity.

Those afflicted with albinism are generally as healthy as the rest of the population (but see related disorders below), with growth and development occurring as normal, and albinism by itself does not cause mortality,[6] although the lack of pigment blocking ultraviolet radiation increases the risk of melanomas (skins cancers) and other problems.

Development of the optical system is highly dependent on the presence of melanin, and the reduction or absence of this pigment in sufferers of albinism may lead to:

Eye conditions common in albinism include:

Some of the visual problems associated with albinism arise from a poorly developed retinal pigment epithelium (RPE) due to the lack of melanin.{{ safesubst:#invoke:Unsubst||date=__DATE__ |$B= {{#invoke:Category handler|main}}{{#invoke:Category handler|main}}[citation needed] }} This degenerate RPE causes foveal hypoplasia (a failure in the development of normal foveae), which results in eccentric fixation and lower visual acuity, and often a minor level of strabismus.

The iris is a sphincter formed from pigmented tissue that contracts when the eye is exposed to bright light, to protect the retina by limiting the amount of light passing through the pupil. In low light conditions the iris relaxes to allow more light to enter the eye. In albinistic subjects, the iris does not have enough pigment to block the light, thus the decrease in pupil diameter is only partially successful in reducing the amount of light entering the eye.{{ safesubst:#invoke:Unsubst||date=__DATE__ |$B= {{#invoke:Category handler|main}}{{#invoke:Category handler|main}}[citation needed] }} Additionally, the improper development of the RPE, which in normal eyes absorbs most of the reflected sunlight, further increases glare due to light scattering within the eye.[9] The resulting sensitivity (photophobia) generally leads to discomfort in bright light, but this can be reduced by the use of sunglasses and/or brimmed hats.[10]

Oculocutaneous albinism is generally the result of the biological inheritance of genetically recessive alleles (genes) passed from both parents of an individual for example OCA1 and OCA2. Some rare forms are inherited from only one parent. There are other genetic mutations which are proven to be associated with albinism. All alterations, however, lead to changes in melanin production in the body.[6][11] Some of these are associated with increased risk of skin cancer ( see list of such genetic variations).

The chance of offspring with albinism resulting from the pairing of an organism with albinism and one without albinism is low. However, because organisms (including humans) can be carriers of genes for albinism without exhibiting any traits, albinistic offspring can be produced by two non-albinistic parents. Albinism usually occurs with equal frequency in both sexes.[6] An exception to this is ocular albinism, which it is passed on to offspring through X-linked inheritance. Thus, ocular albinism occurs more frequently in males as they have a single X and Y chromosome, unlike females, whose genetics are characterized by two X chromosomes.[12]

Template:Refimprove section Genetic testing can confirm albinism and what variety it is, but offers no medical benefits except in the cases of non-OCA disorders (see below) that cause albinism along with other medical problems which may be treatable. There is no 'cure' for Albinism. The symptoms of albinism can be assisted by various methods detailed below.

For the most part, treatment of the eye conditions consists of visual rehabilitation. Surgery is possible on the ocular muscles to decrease nystagmus, strabismus and common refractive errors like astigmatism.[5] Nystagmus-damping surgery can also be performed, to reduce the "shaking" of the eyes back and forth.[13] The effectiveness of all these procedures varies greatly and depends on individual circumstances.

Glasses and other vision aids, large-print materials as well as bright but angled reading lights, can help individuals with albinism, even though their vision cannot be corrected completely. Some people with albinism do well using bifocals (with a strong reading lens), prescription reading glasses, and/or hand-held devices such as magnifiers or monoculars.[10] Contact lenses may be colored to block light transmission through the iris. But in the case of nystagmus this is not possible, due to the irritation that is caused by the movement of the eyes. Some use bioptics, glasses which have small telescopes mounted on, in, or behind their regular lenses, so that they can look through either the regular lens or the telescope. Newer designs of bioptics use smaller light-weight lenses. Some US states allow the use of bioptic telescopes for driving motor vehicles. (See also NOAH bulletin "Low Vision Aids".) It is important to remember there is no cure for Albinism which is not a sickness or disease. People with Albinism need to take care not to sun-burn and should have regular healthy skin checks by a dermatologist.

Albinism affects people of all ethnic backgrounds; its frequency worldwide is estimated to be approximately one in 17,000. Prevalence of the different forms of albinism varies considerably by population, and is highest overall in people of sub-Saharan African descent.[14]

{{#invoke:main|main}} In physical terms, humans with albinism commonly have visual problems and need sun protection. They often face social and cultural challenges (even threats), as the condition is often a source of ridicule, discrimination, or even fear and violence. Many cultures around the world have developed beliefs regarding people with albinism.

In African countries such as Tanzania[15] and Burundi,[16][17] there has been an unprecedented rise in witchcraft-related killings of albino people in recent years, because their body parts are used in potions sold by witchdoctors. Numerous authenticated incidents have occurred in Africa during the 21st Century.[18][19][20][21] For example, in Tanzania, in September 2009, three men were convicted of killing a 14-year-old albino boy and severing his legs in order to sell them for witchcraft purposes.[22] Again in Tanzania and Burundi in 2010, the murder and dismemberment of a kidnapped albino child was reported from the courts,[16] as part of a continuing problem. National Geographic estimates that in Tanzania a complete set of albino body parts is worth $75,000.[23]

Another harmful and false belief is that sex with an albinistic woman will cure a man of HIV. This has led, for example in Zimbabwe, to rapes (and subsequent HIV infection).[24]

Certain ethnic groups and populations in isolated areas exhibit heightened susceptibility to albinism, presumably due to genetic factors. These include notably the Native American Kuna and Zuni nations (respectively of Panama and New Mexico); Japan, in which one particular form of albinism is unusually common; and Ukerewe Island, the population of which shows a very high incidence of albinism.[25]

Famous people with albinism include historical figures such as Oxford don William Archibald Spooner; actor-comedian Victor Varnado; musicians such as Johnny and Edgar Winter, Salif Keita, Winston "Yellowman" Foster, Brother Ali, Sivuca, Willie "Piano Red" Perryman; and fashion models Connie Chiu and Shaun Ross. Emperor Seinei of Japan is thought to have been an albino because he was said to have been born with white hair.

Many animals with albinism lack their protective camouflage and are unable to conceal themselves from their predators or prey; the survival rate of animals with albinism in the wild is usually quite low.[26][27] However the novelty of albino animals has occasionally led to their protection by groups such as the Albino Squirrel Preservation Society.

In "partial albinism", there can be a single patch or patches of skin that lack melanin. Especially in albinistic birds and reptiles, ruddy and yellow hues or other colors may be present on the entire body or in patches (as is common among pigeons), because of the presence of other pigments unaffected by albinism such as porphyrins, pteridines and psittacins, as well as carotenoid pigments derived from the diet.

Intentionally bred albinistic strains of some animal species are commonly used as model organisms in biomedical study and experimentation, although some researchers have argued that they are not always the best choice.[28] Examples include the BALB/c mouse and Wistar and Sprague Dawley rat strains, while albino rabbits were historically used for Draize toxicity testing.[29] The yellow mutation in fruit flies is their version of albinism.

The incidence of albinism can be artificially increased in fish by exposing the eggs to heavy metals (arsenic, cadmium, copper, mercury, selenium, zinc).[30]

The eyes of an albino animal appear red because the colour of the red blood cells in the underlying retinal blood vessels shows through where there is no pigment to obscure it.

Famous albino animals include Migaloo, a humpback whale off the coast of Australia; Pinky, a bottlenose dolphin living in and around in Calcasieu Lake, Louisiana; Snowflake, a Barcelona Zoo gorilla; Snowflake, a Bristol Zoo penguin; and Mahpiya Ska (Sioux for "White Cloud"), a buffalo in Jamestown, North Dakota.[31] The inspiration for Herman Melville's novel Moby-Dick was a sperm whale known as Mocha Dick.

In some animals, albinism-like conditions may affect other pigments or pigment-production mechanisms:

Plants that are pale due to a mutation that eliminates chlorophyll production are sometimes termed albinos, whereas plants that are pale from being in the dark are called etiolated. Albino redwoods are rare examples that may grow to substantial size as parasites.