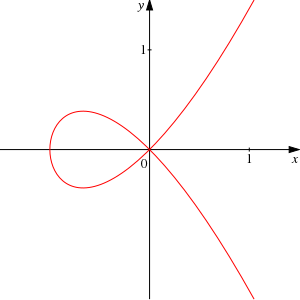 A cubic plane curve given by

In algebraic geometry, an affine variety over an algebraically closed field k is the zero-locus in the affine n-space

of some finite family of polynomials of n variables with coefficients in k that generate a prime ideal. If the condition of generating a prime ideal is removed, such a set is called an (affine) algebraic set. A Zariski open subvariety of an affine variety is called a quasi-affine variety.

If X is an affine variety defined by a prime ideal I, then the quotient ring

is called the coordinate ring of X. This ring is precisely the set of all regular functions on X; in other words, it is the space of global sections of the structure sheaf of X. A theorem of Serre gives a cohomological characterization of an affine variety; it says an algebraic variety is affine if and only if

and any quasi-coherent sheaf F on X. (cf. Cartan's theorem B.) This makes the cohomological study of an affine variety non-existent, in a sharp contrast to the projective case in which cohomology groups of line bundles are of central interest.

The most concrete point of view to describe an affine algebraic variety is that it is the set of solutions in an algebraically closed field k of a system of polynomial equations with coefficients in k. More precisely, if

are polynomials with coefficients in k, they define an affine variety (or affine algebraic set)

By Hilbert's Nullstellensatz, the points of the variety are in one to one correspondence with the maximal ideals of its coordinate ring, the k-algebra

denotes the image in the quotient algebra R of the polynomial

In scheme theory, this correspondence has been extended to prime ideals to define the affine scheme

which may be identified to the variety, through an equivalence of categories.

is the image of a polynomial

which defines a function from kn into k; The restriction of f to the variety does not depend on the choice of

among the polynomials mapped on

The dimension of a variety is an integer associated to every variety, and even to every algebraic set, whose importance relies on the large number of its equivalent definitions (see Dimension of an algebraic variety).

where A, B are integral domains that are the quotient of the polynomial ring

arises in this way is called a morphism of affine varieties. Now, if Y is k, then

may be identified with a regular function. By the same logic, if

can be thought of as an n-tuple of regular functions. Since

, a morphism between affine varieties in general would have this form.

Template:Expand section Tangent spaces may be defined just as in calculus. Let

defined by the linear equations

is called the tangent space at

[1] (A more intrinsic definition is given by Zariski tangent space.) If the tangent space at x and the variety X have the same dimension, the point x is said to be smooth; otherwise, singular.

The important difference from calculus is that the inverse function theorem fails. To alleviate this problem, one has to consider the étale topology instead of the Zariski topology. (cf. Milne, Étale)Template:Clarify

The original article was written as a partial human translation of the corresponding French article.