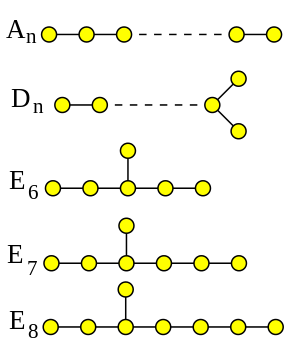 In mathematics, the ADE classification (originally A-D-E classifications) is the complete list of simply laced Dynkin diagrams or other mathematical objects satisfying analogous axioms; "simply laced" means that there are no multiple edges, which corresponds to all simple roots in the root system forming angles of

(no edge between the vertices) or

These comprise two of the four families of Dynkin diagrams (omitting

), and three of the five exceptional Dynkin diagrams (omitting

If one extends the families to include redundant terms, one obtains the exceptional isomorphisms

and corresponding isomorphisms of classified objects.

The question of giving a common origin to these classifications, rather than a posteriori verification of a parallelism, was posed in Template:Harv.

The A, D, E nomenclature also yields the simply laced finite Coxeter groups, by the same diagrams: in this case the Dynkin diagrams exactly coincide with the Coxeter diagrams, as there are no multiple edges.

The same classification applies to discrete subgroups of

and the representations of these groups can be understood in terms of these diagrams. This connection is known as the Template:Visible anchor after John McKay. The connection to Platonic solids is described in Template:Harv. The correspondence uses the construction of McKay graph.

while the reflection groups of the tetrahedron, cube/octahedron, and dodecahedron/icosahedron are instead representations of the Coxeter groups

constructed using each discrete subgroup leads to an ADE-type singularity at the origin, termed a du Val singularity.

The McKay correspondence can be extended to multiply laced Dynkin diagrams, by using a pair of binary polyhedral groups. This is known as the Slodowy correspondence, named after Peter Slodowy – see Template:Harv.

The affine ADE graphs are the only graphs that admit a positive labeling (labeling of the nodes by positive real numbers) with the following property:

Twice any label is the sum of the labels on adjacent vertices.

That is, they are the only positive functions with eigenvalue 1 for the discrete Laplacian (sum of adjacent vertices minus value of vertex) – the positive solutions to the homogeneous equation:

Equivalently, the positive functions in the kernel of

The resulting numbering is unique up to scale, and if normalized such that the smallest number is 1, consists of small integers – 1 through 6, depending on the graph.

The ordinary ADE graphs are the only graphs that admit a positive labeling with the following property:

Twice any label minus two is the sum of the labels on adjacent vertices.

In terms of the Laplacian, the positive solutions to the inhomogeneous equation:

The resulting numbering is unique (scale is specified by the "2") and consists of integers; for E8 they range from 58 to 270, and have been observed as early as Template:Harv.

The elementary catastrophes are also classified by the ADE classification.

The ADE diagrams are exactly the tame quivers, via Gabriel's theorem.

Arnold has subsequently proposed many further connections in thisTemplate:Which vein, under the rubric of "mathematical trinities",[3][4] and McKay has extended his correspondence along parallel and sometimes overlapping lines. Arnold terms these "trinities" to evoke religion, and suggest that (currently) these parallels rely more on faith than on rigorous proof, though some parallels are elaborated. Further trinities have been suggested by other authors.[5][6][7] Arnold's trinities begin with R/C/H (the real numbers, complex numbers, and quaternions), which he remarks "everyone knows", and proceeds to imagine the other trinities as "complexifications" and "quaternionifications" of classical (real) mathematics, by analogy with finding symplectic analogs of classic Riemannian geometry, which he had previously proposed in the 1970s. In addition to examples from differential topology (such as characteristic classes), Arnold considers the three Platonic symmetries (tetrahedral, octahedral, icosahedral) as corresponding to the reals, complexes, and quaternions, which then connects with McKay's more algebraic correspondences, below.

(corresponding to tetrahedral, octahedral, and icosahedral symmetry) have symmetry groups

respectively, and the associated foldings are the diagrams

(note that in less careful writing, the extended (tilde) qualifier is often omitted). More significantly, McKay suggests a correspondence between the nodes of the

diagram and certain conjugacy classes of the monster group, which is known as McKay's E8 observation;[8][9] see also monstrous moonshine. McKay further relates the nodes of

to conjugacy classes in 2.B (an order 2 extension of the baby monster group), and the nodes of

to conjugacy classes in 3.Fi24' (an order 3 extension of the Fischer group)[9] – note that these are the three largest sporadic groups, and that the order of the extension corresponds to the symmetries of the diagram.

Turning from large simple groups to small ones, the corresponding Platonic groups

These groups also are related to various geometries, which dates to Felix Klein in the 1870s; see icosahedral symmetry: related geometries for historical discussion and Template:Harv for more recent exposition. Associated geometries (tilings on Riemann surfaces) in which the action on p points can be seen are as follows: PSL(2,5) is the symmetries of the icosahedron (genus 0) with the compound of five tetrahedra as a 5-element set, PSL(2,7) of the Klein quartic (genus 3) with an embedded (complementary) Fano plane as a 7-element set (order 2 biplane), and PSL(2,11) the Template:Visible anchor (genus 70) with embedded Paley biplane as an 11-element set (order 3 biplane).[13] Of these, the icosahedron dates to antiquity, the Klein quartic to Klein in the 1870s, and the buckyball surface to Pablo Martin and David Singerman in 2008.