35 is a tetrahedral number 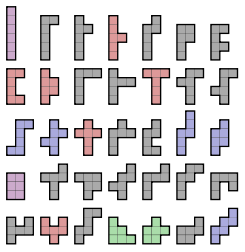 35 is the sum of the first five triangular numbers, making it a tetrahedral number.

35 is the number of ways that three things can be selected from a set of seven unique things also known as the "combination of seven things taken three at a time".

35 is a centered cube number, a pentagonal number and a pentatope number.

35 is a highly cototient number, since there are more solutions to the equation x - φ(x) = 35 than there are for any other integers below it except 1.

There are 35 free hexominoes, the polyominoes made from six squares.

35 is the highest number one can count to on one's fingers using base 6.