of a galaxy varies with distance

from its center. It is a generalization of de Vaucouleurs' law. J. L. Sérsic first published his law in 1963.[1]

The Sérsic profile has the form

is the intensity at

, called the "Sérsic index," controls the degree of curvature of the profile (see figure). The smaller the value of

, the less centrally concentrated the profile is and the shallower (steeper) the logarithmic slope at small (large) radii is:

Massive elliptical galaxies have high Sérsic indices and a high degree of central concentration. This galaxy, Messier 87, has n ≈ 4.[2] 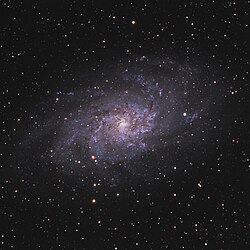 Discs of spiral galaxies, such as the Triangulum Galaxy, have low Sérsic indices and a low degree of central concentration.

Most galaxies are fit by Sérsic profiles with indices in the range 1/2 < n < 10. The best-fit value of n correlates with galaxy size and luminosity, such that bigger and brighter galaxies tend to be fit with larger n. [3] [4] Setting n = 4 gives the de Vaucouleurs profile:

which is a good description of giant elliptical galaxies. Setting n = 1 gives the exponential profile:

which is a good description of spiral galaxy disks and dwarf elliptical galaxies. The correlation of Sérsic index (i.e. galaxy concentration) with galaxy morphology is sometimes used in automated schemes to determine the Hubble type of distant galaxies.[5] Sérsic indices have also been shown to correlate with the mass of the supermassive black hole at the centers of the galaxies. [6]

Generalizations of the Sérsic profile

The brightest elliptical galaxies often have low-density cores that are not well described by Sérsic's law. The "core-Sérsic" family of models was introduced by A. Graham et al. [9] and Trujillo et al. [10] and further developed by B. Terzić and A. Graham in 2005 to describe such galaxies.[11] Core-Sérsic models have an additional set of parameters that describe the core radius and core density.

Dwarf elliptical galaxies sometimes have pointlike nuclei that are also not well described by Sérsic's law. These galaxies are often fit by a Sérsic model with an added central component representing the nucleus. [12] [13]

The Einasto profile is mathematically identical to the Sérsic profile, except that

, the space density, and

, the true (not projected) distance from the center.