From formulasearchengine
Revision as of 12:48, 9 August 2012 by en>Zfeinst (does not add any understanding by saying it is 'like' brownian motion with drift)
(diff) ← Older revision | Latest revision (diff) | Newer revision → (diff)
Jump to navigation Jump to search 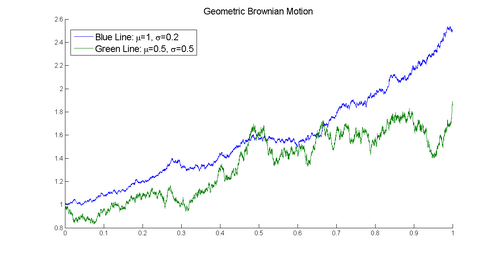 A stochastic process St is said to follow a GBM if it satisfies the following stochastic differential equation (SDE):

is a Wiener process or Brownian motion and

('the percentage drift') and

('the percentage volatility') are constants. The latter term is often used to model a set of unpredictable events occurring during this motion, while the former is used to model deterministic trends.

For an arbitrary initial value S0 the above SDE has the analytic solution (under Itō's interpretation):

To arrive at this formula, let us divide the SDE by

, and write it in Itō integral form:

looks like having a lot to do with the derivative of

being an Itō process, we need to use Itō calculus: by Itō's formula, we have

Plugging back to the equation we got from the SDE, we obtain

Exponentiating gives the solution claimed above.

that is the probability density function of a St is:

When deriving further properties of GBM, use can be made of the SDE of which GBM is the solution, or the explicit solution given above can be used. For example, consider the stochastic process log(St). This is an interesting process, because in the Black–Scholes model it is related to the log return of the stock price. Using Itō's lemma with f(S) = log(S) gives

This result can also be derived by applying the logarithm to the explicit solution of GBM:

Taking the expectation yields the same result as above:

GBM can be extended to the cast where there are multiple correlated price paths.

where the Wiener processes are correlated such that

For the multivariate case, this implies that

Use of GBM in finance

{{#invoke:main|main}} Geometric Brownian Motion is used to model stock prices in the Black–Scholes model and is the most widely used model of stock price behavior.[3]

Some of the arguments for using GBM to model stock prices are:

However, GBM is not a completely realistic model, in particular it falls short of reality in the following points:

In an attempt to make GBM more realistic as a model for stock prices, one can drop the assumption that the volatility (