In signal processing, a digital biquad filter is a second-order recursive linear filter, containing two poles and two zeros. "Biquad" is an abbreviation of "biquadratic", which refers to the fact that in the Z domain, its transfer function is the ratio of two quadratic functions:

The coefficients are often normalized such that a0 = 1:

High-order IIR filters can be highly sensitive to quantization of their coefficients, and can easily become unstable. This is much less of a problem with first and second-order filters; therefore, higher-order filters are typically implemented as serially-cascaded biquad sections (and a first-order filter if necessary). The two poles of the biquad filter must be inside the unit circle for it to be stable. In general, this is true for all filters i.e. all poles must be inside the unit circle for the filter to be stable.

The most straightforward implementation is the direct form 1, which has the following difference equation:

determine the position of the poles. 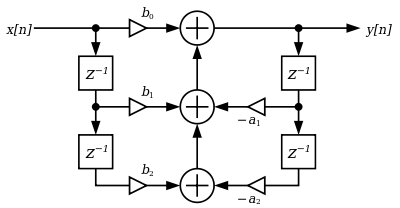 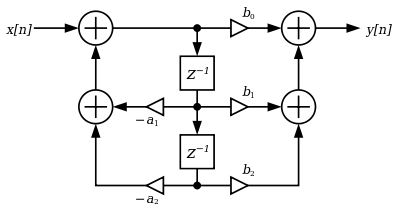