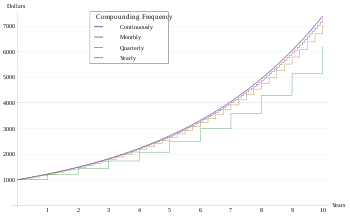 The effect of earning 20% annual interest on an initial $1,000 investment at various compounding frequencies

Compound interest arises when interest is added to the principal, so that, from that moment on, the interest that has been added also earns interest. This addition of interest to the principal is called compounding. A bank account, for example, may have its interest compounded every year: in this case, an account with ¤1000 initial principal and 20% interest per year would have a balance of ¤1200 at the end of the first year, ¤1440 at the end of the second year, and so on.

In order to define an interest rate fully, and enable one to compare it with other interest rates, the interest rate and the compounding frequency must be disclosed. Since most people prefer to think of rates as a yearly percentage, many governments require financial institutions to disclose the equivalent yearly compounded interest rate on deposits or advances. For instance, the yearly rate for a loan with 1% interest per month is approximately 12.68% per annum (1.0112 − 1). This equivalent yearly rate may be referred to as annual percentage rate (APR), annual equivalent rate (AER), annual percentage yield, effective interest rate, effective annual rate, and by other terms. When a fee is charged up front to obtain a loan, APR usually counts that cost as well as the compound interest in converting to the equivalent rate. These government requirements assist consumers to compare the actual costs of borrowing more easily.

The effect of compounding depends on the frequency with which interest is compounded and the periodic interest rate which is applied. Therefore, in order to define accurately the amount to be paid under a legal contract with interest, the frequency of compounding (yearly, half-yearly, quarterly, monthly, daily, etc.) and the interest rate must be specified. Different conventions may be used from country to country, but in finance and economics the following usages are common:

Periodic rate: the interest that is charged (and subsequently compounded) for each period, divided by the amount of the principal. The periodic rate is used primarily for calculations, and is rarely used for comparison. The nominal annual rate or nominal interest rate is defined as the periodic rate multiplied by the number of compounding periods per year. For example, a monthly rate of 1% is equivalent to an annual nominal interest of 12%.

Effective annual rate: this reflects the effective rate as if annual compounding were applied: in other words it is the total accumulated interest that would be payable up to the end of one year, divided by the principal.

Economists generally prefer to use effective annual rates to allow for comparability. In finance and commerce, the nominal annual rate may however be the one quoted instead. When quoted together with the compounding frequency, a loan with a given nominal annual rate is fully specified (the effect of interest for a given loan scenario can be precisely determined), but the nominal rate cannot be directly compared with loans that have a different compounding frequency.

Loans and finance may have other "non-interest" charges, and the terms above do not attempt to capture these differences. Other terms such as annual percentage rate and annual percentage yield may have specific legal definitions and may or may not be comparable, depending on the jurisdiction.

The use of the terms above (and other similar terms) may be inconsistent, and vary according to local custom or marketing demands, for simplicity or for other reasons.

Formulae are presented in greater detail at time value of money.

In the formula below, i is the effective interest rate per period. FV and PV represent the future and present value of a sum. n represents the number of periods.

These are the most basic formulas:

The above calculates the future value (FV) of an investment's present value (PV) accruing at a fixed interest rate (i) for n periods.

The above calculates what present value (PV) would be needed to produce a certain future value (FV) if interest (i) accrues for n periods.

The above calculates the compound interest rate achieved if an initial investment of PV returns a value of FV after n accrual periods.

The above formula calculates the number of periods required to get FV given the PV and the interest rate (i). The log function can be in any base, e.g. natural log (ln), as long as consistent bases are used all throughout calculation.

A formula for calculating annual compound interest is

Example usage: An amount of 1500.00 is deposited in a bank paying an annual interest rate of 4.3%, compounded quarterly. Find the balance after 6 years.

The amount function for compound interest is an exponential function in terms of time.

increases, the rate approaches an upper limit of

. This rate is called continuous compounding, see below.

Note: A(t) is the amount function and a(t) is the accumulation function.

Continuous compounding can be thought of as making the compounding period infinitesimally small; therefore achieved by taking the limit of n to infinity. One should consult definitions of the exponential function for the mathematical proof of this limit.

In mathematics, the accumulation functions are often expressed in terms of e, the base of the natural logarithm. This facilitates the use of calculus methods in manipulation of interest formulae.

For any continuously differentiable accumulation function a(t) the force of interest, or more generally the logarithmic or continuously compounded return is a function of time defined as follows:

which is the rate of change with time of the natural logarithm of the accumulation function.

When the above formula is written in differential equation format, the force of interest is simply the coefficient of amount of change.

When interest is continuously compounded:

The interest on mortgages is often compounded monthly. The formula for payments is found from the following argument.

If the term were only one month then clearly

. If the term were two months then

represents how much of the loan is left after one month. Thus,

. For a term of n months then

This can be simplified by noting that

and taking the difference:

This formula for the monthly payment on a U.S. mortgage is exact and is what banks use.

A formula that is accurate to within a few percent can be found by noting that for typical U.S. note rates (

which yields a simplification so that

installments. In terms of these variables the approximation can be written

implying that it can be expanded in even powers of

It follows immediately that

can be expanded in even powers of

plus the single term:

It will prove convenient then to define

which can be expanded:

is valid to better than 1% provided

which suggests that the approximation

is accurate to better than one percent for typical U.S. mortgage terms in January 2009. The formula becomes less accurate for higher rates and longer terms.

The exact payment amount is

so the approximation is an overestimate of about a sixth of a percent.

Compound interest was once regarded as the worst kind of usury, and was severely condemned by Roman law, as well as the common laws of many other countries. [2]

In one passage, the Bible addresses the charging of interest in the following manner: Template:Cquote2

Richard Witt's book Arithmeticall Questions, published in 1613, was a landmark in the history of compound interest. It was wholly devoted to the subject (previously called anatocism), whereas previous writers had usually treated compound interest briefly in just one chapter in a mathematical textbook. Witt's book gave tables based on 10% (the then maximum rate of interest allowable on loans) and on other rates for different purposes, such as the valuation of property leases. Witt was a London mathematical practitioner and his book is notable for its clarity of expression, depth of insight and accuracy of calculation, with 124 worked examples.[3][4]