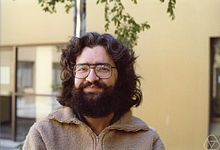 Allen Edward Hatcher (born 1944) is an American topologist and author.

He received his Ph.D. under the supervision of Hans Samelson at Stanford University in 1971. He went on to become a professor in UCLA. Since 1983 he has been a professor at Cornell University.

His contributions include a proof of the Smale conjecture for the 3-sphere and important results in the theory of pseudoisotopy, K-theory, surfaces and 3-manifolds.

Hatcher has made contributions to the so-called theory of essential laminations in 3-manifolds. He invented the notion of "end-incompressibility" and several of his students, such as Mark Brittenham, Charles Delman, and Rachel Roberts, have made important contributions to the theory.

Hatcher and Thurston exhibited an algorithm to produce a presentation of the mapping class group of a closed, orientable surface. Their work relied on the notion of a cut system and moves that relate any two systems.