Difference between revisions of "Adiabatic process"

}} An adiabatic process (Template:IPAc-en; from the Greek privative "a" + "diavaton") is a process that occurs without the transfer of heat or matter between a system and its surroundings.[1][2] A key concept in thermodynamics, adiabatic transfer provides a rigorous conceptual basis for the theory used to expound the first law of thermodynamics. It is also key in a practical sense, that many rapid chemical and physical processes are described using the adiabatic approximation; such processes are usually followed or preceded by events that do involve heat transfer.

Adiabatic processes are primarily and exactly defined for a system contained by walls that are completely thermally insulating and impermeable to matter; such walls are said to be adiabatic. An adiabatic transfer is a transfer of energy as work across an adiabatic wall or sector of a boundary.

Approximately, a transfer may be regarded as adiabatic if it happens in an extremely short time, so that there is no opportunity for significant heat exchange.[3]

The adiabatic flame temperature is a virtual quantity. It is the temperature that would be achieved by a flame in the absence of heat loss to the surroundings.

The term adiabatic literally means 'not to be passed'. It is formed from the privative "α" ("not") + διαβατός, "able to be passed through", in turn deriving from διὰ- ("through"), and βαῖνειν ("to pass"), thus ἀδιάβατος .[4] According to Maxwell, the term was introduced by Rankine.[5][6]

An adiabatic transfer of energy as work may be described by the notation Q = 0 where Q is the quantity of energy transferred as heat across the adiabatic boundary or wall.

An ideal or fictive adiabatic transfer of energy as work that occurs without friction or viscous dissipation within the system is said to be isentropic, with ΔS = 0.

For a natural process of transfer of energy as heat, driven by a finite temperature difference, entropy is both transferred with the heat and generated within the system. Such a process is in general neither adiabatic nor isentropic, having Q ≠ 0 and ΔS ≠ 0.

For a general fictive quasi-static transfer of energy as heat, driven by an ideally infinitesimal temperature difference, the second law of thermodynamics provides that δQ = T deS, where δQ denotes an infinitesimal element of transfer of energy as heat into the system from its surroundings, T denotes the practically common temperature of system and surroundings at which the transfer takes place, and deS denotes the infinitesimal element of entropy transferred into the system from the surroundings with the heat transfer. For an adiabatic fictive quasi-static process, δQ = 0 and deS = 0.

A natural adiabatic process is irreversible and is not isentropic. Adiabatic transfer of energy as work can be analyzed into two extreme component kinds. One extreme kind is without friction or viscous dissipation within the system, and this is usually pressure-volume work, denoted customarily by P dV. This is an ideal case that does not exactly occur in nature. It may be regarded as "reversible". The other extreme kind is isochoric work, for which dV = 0, solely through friction or viscous dissipation within the system. Isochoric work is irreversible.[8] The second law of thermodynamics observes that a natural process of transfer of energy as work, exactly considered, always consists at least of isochoric work and often of both of these extreme kinds of work. Every natural process, exactly considered, is irreversible, however slight may be the friction or viscosity.

Adiabatic changes in temperature occur due to changes in pressure of a gas while not adding or subtracting any heat. In contrast, free expansion is an isothermal process for an ideal gas.

Adiabatic heat occurs when the pressure of a gas is increased from work done on it by its surroundings, e.g., a piston compressing a gas contained within an adiabatic cylinder. This finds practical application in Diesel engines which rely on the lack of quick heat dissipation during their compression stroke to elevate the fuel vapor temperature sufficiently to ignite it.

Adiabatic heating also occurs in the Earth's atmosphere when an air mass descends, for example, in a katabatic wind or Foehn or chinook wind flowing downhill over a mountain range. When a parcel of air descends, the pressure on the parcel increases. Due to this increase in pressure, the parcel's volume decreases and its temperature increases, thus increasing the internal energy.

Adiabatic cooling occurs when the pressure of a substance is decreased as it does work on its surroundings. Adiabatic cooling occurs in the Earth's atmosphere with orographic lifting and lee waves, and this can form pileus or lenticular clouds if the air is cooled below the dew point. When the pressure applied on a parcel of air decreases, the air in the parcel is allowed to expand; as the volume increases, the temperature falls and internal energy decreases.

Adiabatic cooling does not have to involve a fluid. One technique used to reach very low temperatures (thousandths and even millionths of a degree above absolute zero) is adiabatic demagnetisation, where the change in magnetic field on a magnetic material is used to provide adiabatic cooling. Also, the contents of an expanding universe (to first order) can be described as an adiabatically cooling fluid. (See - Heat death of the universe)

Rising magma also undergoes adiabatic cooling before eruption, particularly significant in the case of magmas that rise quickly from great depths such as kimberlites.[9]

Such temperature changes can be quantified using the ideal gas law, or the hydrostatic equation for atmospheric processes.

In practice, no process is truly adiabatic. Many processes rely on a large difference in time scales of the process of interest and the rate of heat dissipation across a system boundary, and thus are approximated by using an adiabatic assumption. There is always some heat loss, as no perfect insulators exist. 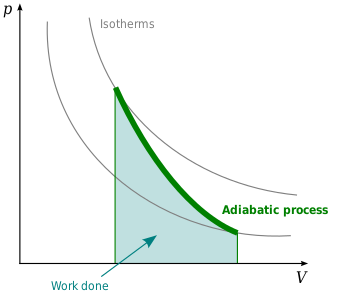 For a simple substance, during an adiabatic process in which the volume increases, the internal energy of the working substance must decrease

The mathematical equation for an ideal gas undergoing a reversible (i.e., no entropy generation) adiabatic process is

where P is pressure, V is volume, and

being the specific heat for constant pressure,

being the specific heat for constant volume,

is the adiabatic index, and

is the number of degrees of freedom (3 for monatomic gas, 5 for diatomic gas and collinear molecules e.g. carbon dioxide).

For a monatomic ideal gas,

, and for a diatomic gas (such as nitrogen and oxygen, the main components of air)

.[10] Note that the above formula is only applicable to classical ideal gases and not Bose–Einstein or Fermi gases.

For reversible adiabatic processes, it is also true that

where T is an absolute temperature.

This can also be written as

Let's now look at a common example of adiabatic compression- the compression stroke in a gasoline engine. We will make a few simplifying assumptions: that the uncompressed volume of the cylinder is 1000 cm3 (one liter), that the gas within is nearly pure nitrogen (thus a diatomic gas with five degrees of freedom and so

= 7/5), and that the compression ratio of the engine is 10:1 (that is, the 1000 cm3 volume of uncompressed gas will compress down to 100 cm3 when the piston goes from bottom to top). The uncompressed gas is at approximately room temperature and pressure (a warm room temperature of ~27 ºC or 300 K, and a pressure of 1 bar ~ 100 kPa, or about 14.7 PSI, or typical sea-level atmospheric pressure).

so our adiabatic constant for this experiment is about 1.58 billion.

The gas is now compressed to a 100cc volume (we will assume this happens quickly enough that no heat can enter or leave the gas). The new volume is 100 ccs, but the constant for this experiment is still 1.58 billion:

so solving for P:

or about 362 PSI or 24.5 atm. Note that this pressure increase is more than a simple 10:1 compression ratio would indicate; this is because the gas is not only compressed, but the work done to compress the gas has also heated the gas and the hotter gas will have a greater pressure even if the volume had not changed.

We can solve for the temperature of the compressed gas in the engine cylinder as well, using the ideal gas law. Our initial conditions are 100,000 pa of pressure, 1000 cc volume, and 300 K of temperature, so our experimental constant is:

That's a final temperature of 751 K, or 477 °C, or 892 °F, well above the ignition point of many fuels. This is why a high compression engine requires fuels specially formulated to not self-ignite (which would cause engine knocking when operated under these conditions of temperature and pressure), or that a supercharger and inter cooler to provide a lower temperature at the same pressure would be advantageous. A diesel engine operates under even more extreme conditions, with compression ratios of 20:1 or more being typical, in order to provide a very high gas temperature which ensures immediate ignition of injected fuel.

Adiabatic free expansion of a gas

{{#invoke:see also|seealso}} For an adiabatic free expansion of an ideal gas, the gas is contained in an insulated container and then allowed to expand in a vacuum. Because there is no external pressure for the gas to expand against, the work done by or on the system is zero. Since this process does not involve any heat transfer or work, the First Law of Thermodynamics then implies that the net internal energy change of the system is zero. For an ideal gas, the temperature remains constant because the internal energy only depends on temperature in that case. Since at constant temperature, the entropy is proportional to the volume, the entropy increases in this case, therefore this process is irreversible.

Derivation of continuous formula for adiabatic heating and cooling

The definition of an adiabatic process is that heat transfer to the system is zero,

. Then, according to the first law of thermodynamics,

However, P does not remain constant during an adiabatic process but instead changes along with V.

It is desired to know how the values of dP and dV relate to each other as the adiabatic process proceeds. For an ideal gas the internal energy is given by

Differentiating Equation (3) and use of the ideal gas law,

Equation (4) is often expressed as

Now substitute equations (2) and (4) into equation (1) to obtain

and divide both sides by PV:

After integrating the left and right sides from

to V and from

to P and changing the sides respectively,

Exponentiate both sides, and substitute

The change in internal energy of a system, measured from state 1 to state 2, is equal to

At the same time, the work done by the pressure-volume changes as a result from this process, is equal to

Since we require the process to be adiabatic, the following equation needs to be true

By the previous derivation,

Substituting this into (2) gives

By the continuous formula,

Substituting into the previous expression for

Substituting this expression and (1) in (3) gives

An adiabat is a curve of constant entropy on the P-V diagram. Properties of adiabats on a P-V diagram are:

The following diagram is a P-V diagram with a superposition of adiabats and isotherms: 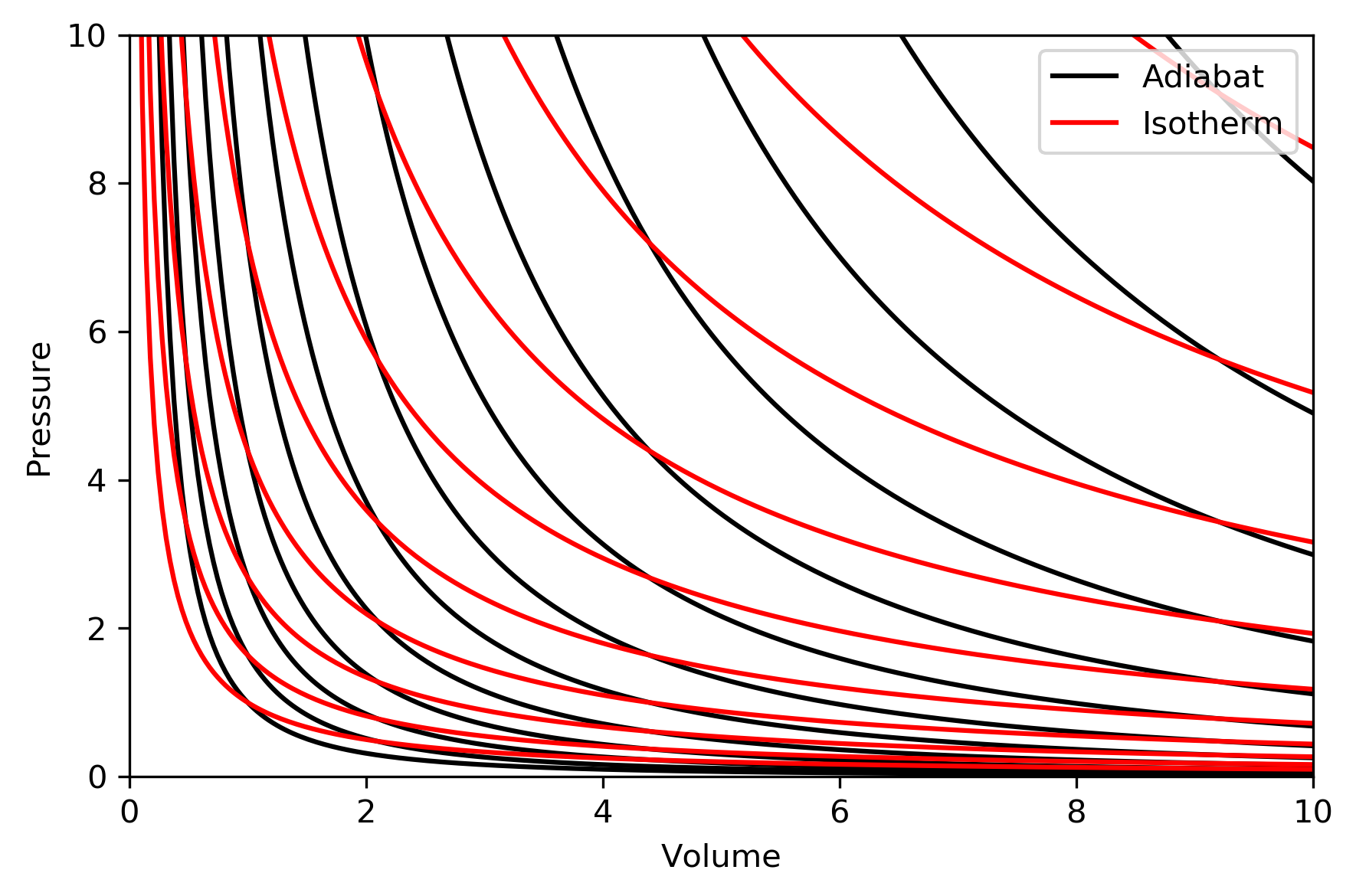 The isotherms are the red curves and the adiabats are the black curves.

Volume is the horizontal axis and pressure is the vertical axis.